The ANC in Gauteng has called the effigy of Education MEC Panyaza Lesufi a "cowardice [act] by racists" who are determined to undermine the efforts of a non-racial society.

The effigy of Lesufi was paraded through Tshwane earlier this week, with the figure eventually being hung by its neck outside the offices of Minister of Basic Education Angie Motshekga.

"This brazen act by anti-transformation agents flies in the face of the supremacy of the Constitution of the Republic of South Africa, which advocates for equality and the advancement of human rights and freedoms including non-racialism.

"It follows several threats Comrade Panyaza has been receiving together with his family after the ANC-led government's decision to change the language policy at certain schools in the province from Afrikaans only to parallel medium schools," he said.

Modiba urged Lesufi, and the Gauteng and national departments of education to open a case with the police.

"What is very clear from this latest incident is that the recent judgment meted out to convicted racist, Vicki Momberg, which sets a precedent for other racial related cases, has not had the desired effect, as those that are hell-bent on dividing out society along racial lines still feel the need to defend their apartheid racial legacy," he said.

"This means that the imperative to redress the results of past racially discriminatory laws and practices is more urgent than ever before."

On Wednesday, Lesufi said his children had been told to tell their father "to stop doing what he is doing".

"I am not worried. I went through worse things during those worse days of apartheid," he said.

"It (the effigy) is an insult to anyone who believes in non-racial education for all."

Of the incident, he tweeted: "These morons came to our offices to "hang" me! We defeated your racists grandparents, you are nothing! (sic)".

When asked if they were pressing charges, Gauteng education spokesperson Steve Mabona said: "We will inform on our actions." 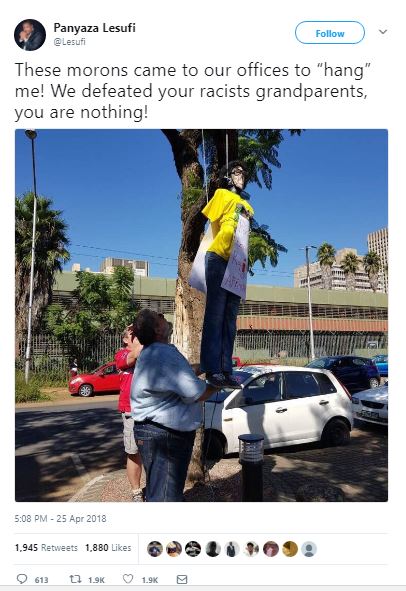