Survey finds that 54% of ANC supporters agree with this sentiment, President's approval at lowest levels ever

The approval rating of President Jacob Zuma, as expressed by South African voters and even by ANC supporters is at the lowest level ever, according to the latest eNCA/Ipsos Approval Ratings poll. In addition, the majority of South Africans are asking for his resignation.

The approval rating of President Jacob Zuma, as expressed by South African voters and even by ANC supporters is at the lowest level ever, according to the latest eNCA/Ipsos Approval Ratings poll. In addition, the majority of South Africans are asking for his resignation.

During face-to-face interviewing, the opinions of 3,598 randomly selected South Africans were canvassed – of these 3,471 were older than 18. Fieldwork was undertaken between 21 April and 22 May 2017. The results were weighted and projected to the universe from which the sample was drawn and are a mirror-image of the views of South Africans. (For more information, see the technical detail).

Respondents were asked to rate several politicians on a scale of 0 to 10 - where 0 means ‘totally against’ and 10 ‘totally in favour’ of the particular political leader.

Respondents were asked to rate their agreement that 'President Zuma should resign'. This below graph shows this poignant finding: whereas almost two-thirds of eligible South African voters want president Zuma to go, the negative sentiment against him in his own party is also strong – with more than half of ANC supporters (54%) saying that the president should leave office voluntarily. In fact, only slightly more than a quarter (27%) of ANC supporters want him to stay in his position. 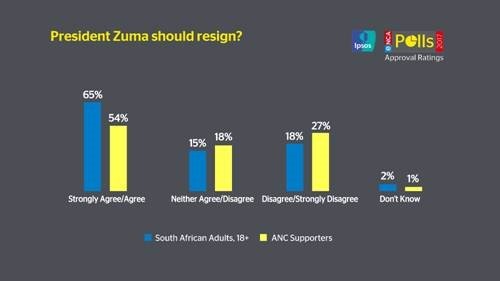 The rating of president Zuma was 2.8 out of 10. This is the lowest score obtained for any president ever measured in this study (which has been undertaken since 1993) and is a relatively lower figure than the average of 4.0 expressed for the president in November 2016. “This low rating confirms the steady downward slope of the president’s approval rating since the start of his second term in office as president of South Africa,” says Mari Harris, political analyst and Director of Public Affairs at the research company Ipsos.  “This extremely low rating follows on a turbulent first five months of 2017, where we have seen cabinet shuffles late in the night, growing opposition against the president expressed by the ANC’s tripartite comrades, a downgrade of the country by rating agencies and many speculations and hard news about corruption and state capture.” 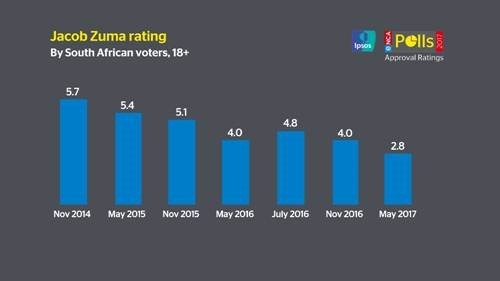 Examining how ANC supporters feel about the president of the organisation and the country reveals also an all-time low score of 4.2 out of 10.  Approval of president Zuma by his own party still stood at 5.4 out of 10 in November 2016.

To further explore these findings, we can look at the detailed results – the table below specifies the percentages of eligible voters and ANC supporters who assigned a particular approval number to the president. 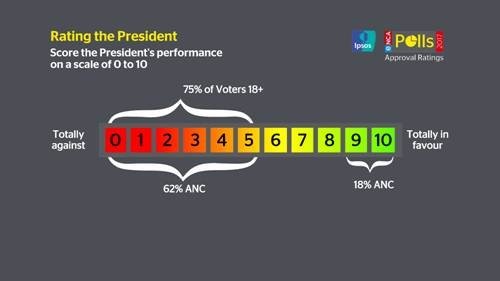 When looking at the opinions expressed by eligible voters, three-quarters (75%) rate the performance of the president as 5 out of 10 or lower.  Shifting the focus to ANC supporters, more than six in every ten (62%) concur.  It is clear that the president evokes strong negative feelings from within his own constituency, with less than a fifth (18%) scoring his performance as political leader as a 9 or a 10 out of 10.

The results of other questions can be analysed in order to provide further context to describe the findings.  In the questionnaire, respondents are asked to indicate whether they “Strongly agree”, “Agree”, “neither agree nor disagree”, “Disagree” or “Strongly disagree” with a number of statements. 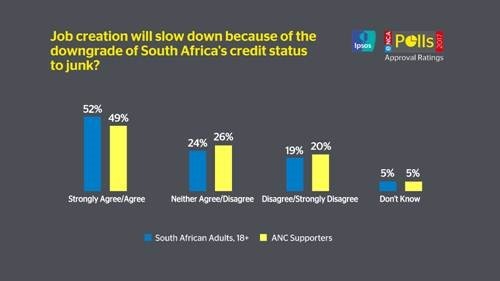 This finding highlights the similar opinions between South African adults of voting age and ANC supporters. In fact, roughly half of each of these groups think that the much-needed job creation in the country will suffer as a result of the downgrade.

It can be argued that the downgrade of the country cannot be ascribed directly to any action of the president, although as the head of government, voters do expect a lot from him.

However, in the opinion of voters, the president’s late night cabinet shuffle did not happen with their approval.  The statement asked of respondents was: 'The removal of Pravin Gordhan from the ministry of finance was a mistake'. 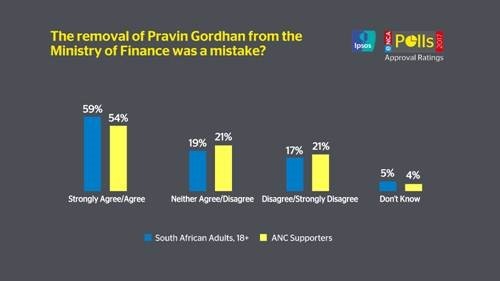 Again, there is only a small difference (of 5 percentage points) between the opinions of the general public and ANC supporters that Mr Gordhan should not have been removed from cabinet.

The approval rate of Cyril Ramaphosa, Deputy President of the ANC and South Africa, has stayed stable over the last measuring period and it currently stands at 5.3 out of 10 amongst eligible voters.  In addition, his approval rate from ANC supporters has increased positively from 5.9 in November 2016 to 6.6 out of 10 in May 2017.

Approval of the rest of the «Top 6»

For the first time, approval ratings for all the top officials of the ANC were included in the same study. 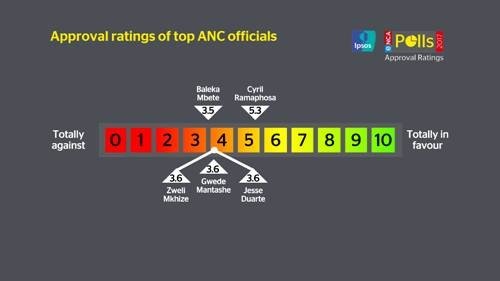 ANC leaders in the news

During the first few months of the year, several ANC leaders regularly featured in the news and the survey probed some of their approval ratings amongst the public and amongst ANC supporters. The inclusion of the previous and the current ministers of finance and the minister of social development is self-explanatory. In addition, ratings for the ex-wife of the president and contender for the presidency of the country was also included. 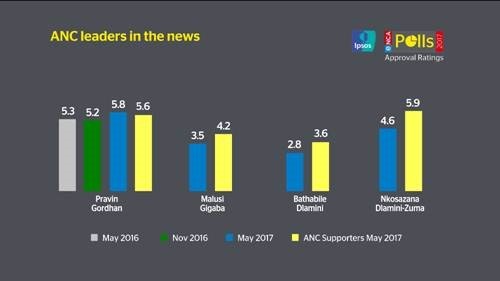 Pravin Gordhan stays one of the most admired ANC leaders – both within and outside of the party.  Malusi Gigaba received a slightly higher approval rating from ANC supporters than from other South Africans – a similar trend was found for Bathabile Dlamini, although her approval ratings are on a much lower level.  Nkosazana Dlamini-Zuma is viewed quite positively by ANC supporters, although this rating is still well below 5 out of 10 amongst the general population. 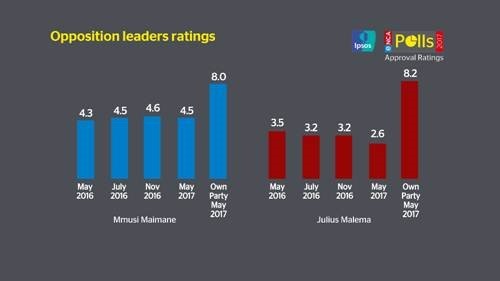 The approval rating of Mmusi Maimane is in the same ballpark as seen in November 2016, while the approval of Julius Malema is quite a bit lower than at the end of last year. However, for both opposition leaders, the approval from their own political parties have increased since last year:

Mmusi Maimane’s approval rating from the DA supporters has improved from 7.0 to 8.0 out of 10 and

Julius Malema’s approval rating from the EFF has improved from 7.6 to 8.2 out of 10.

“It is clear that the actions and views of these political leaders are supported by their own parties.  Their supporters have high regard for their leadership style, while the same can definitely not be said about president Zuma and the ANC”, says Harris.

The Khayabus study conducted from 21 April to 22 May 2017 was the first omnibus conducted by Ipsos in 2017.  A total of 3,471 South Africans, 18 years and older, were interviewed.  They were randomly selected and interviewed face-to-face in their homes and home languages. Interviews were conducted all over the country, from metropolitan areas to deep rural areas. This methodology ensured that the results are representative of the views of the universe and that findings can be weighted and projected to the universe – i.e. South Africans 18 years and older.

Trained quantitative fieldworkers from all population groups were responsible for the interviewing and CAPI (Computer-Assisted Personal Interviewing) was used. All results were collated and analysed in an aggregate format to protect the identity and confidentiality of respondents.

All sample surveys are subject to a margin of error, determined by sample size, sampling methodology and response rate. The sample error for this sample at a 95% confidence level is a maximum of 1.63%.

Our pre-election forecasting on the mark nationally - Ipsos

Race for Joburg and Tshwane too close to call - Ipsos

Shareholders really don’t have a say – Delphine Govender on Naspers