According to indications, ANC support in South Africa is shrinking: In the General Election in 2014, the ANC won 62% of the votes and in the Local Government Elections (2016), 54% of votes were cast for the party.

Indications from public opinion surveys show that this support can be even lower and in May 2017 less than half (47%) of South Africans indicated that they would vote for the ANC, if there were an election the next day.

This figure should, however, not be regarded as a prediction of the 2019 General Election – it is simply too long before the time to start making predictions. Predicting or even speculating about the outcome of an election is infinitely more complicated than just considering the results of a nationally representative opinion poll.

Another interesting phenomenon is that of voter apathy: at the time of the Local Government Elections last year 26,3 million of the 36,8 million South Africans eligible to vote were registered with the IEC (Independent Electoral Commission) as voters. But only 15,3 million turned out to vote.  Thus, a minority of eligible voters, i.e. 41,6% made the choices for the whole population with regard to local authorities. 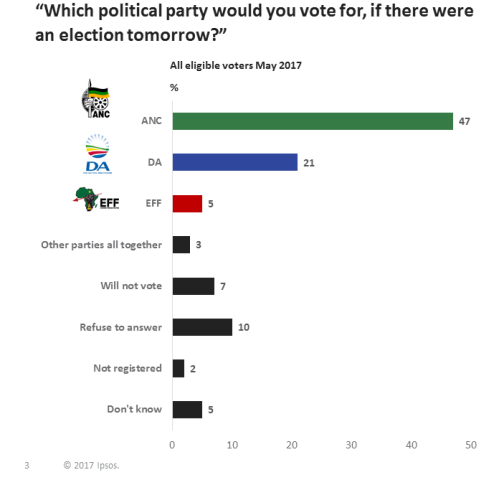 About a quarter (24%) have not chosen a particular political party.  This can also be seen against the background of the 44% of South Africans who expressed the opinion in July 2016, just before the Local Government Elections, that there was no political party expressing their views. The feeling of alienation from political parties is thus very real.

With the DA and their partners taking over the administration of three metropolitan areas from the ANC after the Local Government Elections, there is also speculation that the opposition might win in more provinces than just the Western Cape. However, the ANC is still, by far, the strongest political party in the country.  In four provinces, KwaZulu-Natal, Mpumalanga, the Free State and North West the ANC achieves an outright majority.  In four others, Gauteng, the Eastern Cape, Limpopo and the Northern Cape the ANC support is measured at below 50% - but the DA support in these provinces are not challenging the ruling party at the moment.  In the Western Cape, the ANC has the support of one in every five potential voters, while the DA achieves 47% in this province.

The table below is a summary of political party support as measured in May 2017: 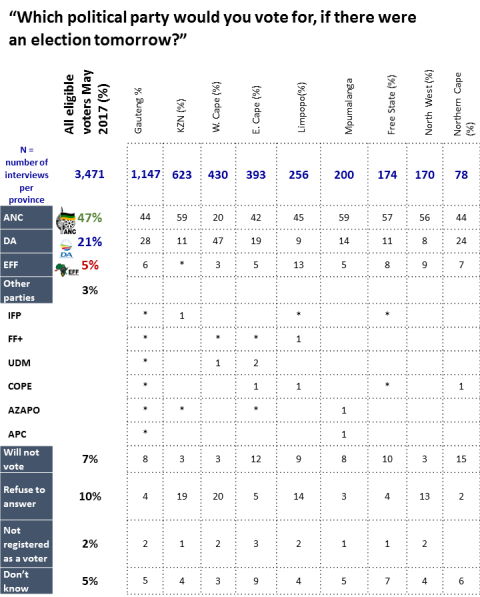 If we regard those who say that they “will not vote” or who are “not registered to vote” as not interested in politics and elections, we can see that this feeling is the strongest in the Eastern and Northern Cape; in each of these provinces, 15% of the electorate are choosing these options.  Likewise, if we assume that those who have “refused to answer” the question or said that they “don’t know” are not necessarily apathetic, but are still making up their minds about their political choices, we can see that this feeling is strongest in KwaZulu-Natal and the Western Cape, followed by Limpopo and North West.

It is clear that political parties have a lot to do all over the country to convince voters to support them – and to turn out to vote in 2019. 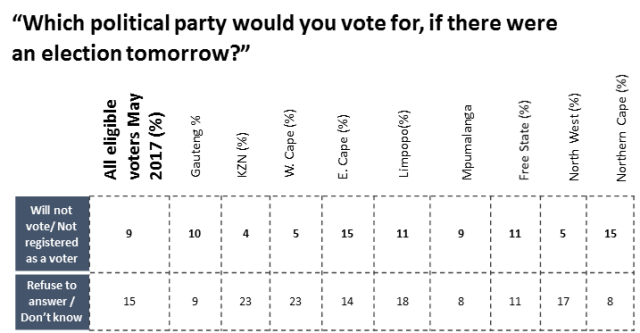 Trust is a very important concept in all relationships, whether personal or professional.  Therefore, Ipsos has tested the trust people place in political parties.  Overall, the ANC enjoys the highest trust of the three biggest political parties, although the “trust score” for the ANC is scarcely above 50.  However, when one looks at the trust placed in each political party by their own supporters, the ANC does not do as well as the DA or EFF.

The question asked was “Using a scale of 1 to 5, would you say you are:

1 Not at all likely to

2 Not very likely to

3 Neither likely nor unlikely to

4 Very likely to or 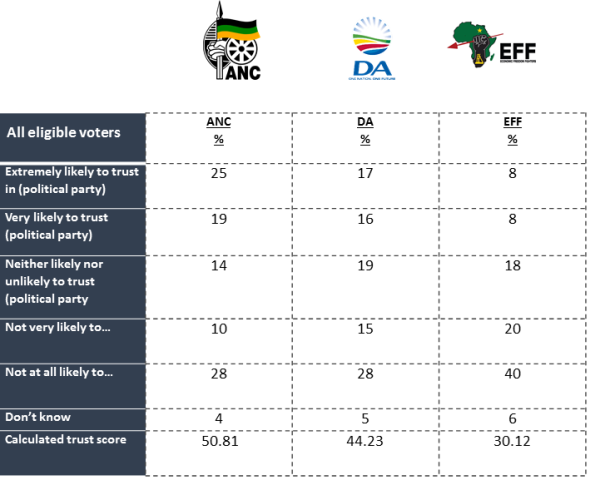 kinds of scores will take drastic measures to improve their positions – however, with high levels of apathy, this might be a strategic challenge for political parties.

We can argue that supporters of a party should trust their own party a lot more than they trust other parties.  This is true of all parties, but interestingly the DA and the EFF supporters have a considerably higher level of trust in their own parties than ANC supporters do.  The divisions in the ANC are also playing out on the terrain of trust in the party.

Trust in own party: 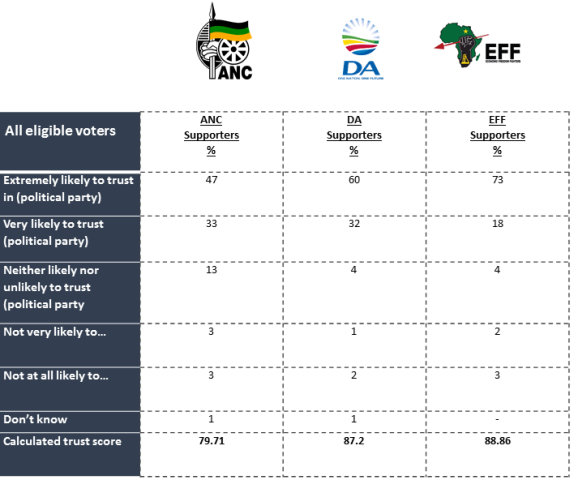 ANC's support down to 53% among eligible voters - Ipsos

OrbVest moves rapidly on US acquisitions in 2021