Charles Simkins examines how coherent the most popular norms are

This brief will continue to consider popular political norms as reflected in the Afrobarometer Round 6 South African Survey [1] .

The coherence of popular political perceptions will be assessed in three ways:

1. Categorisation of respondents by their answers to the following questions:

- Whether democracy is preferable, or whether there is indifference to it or a view that sometimes non-democratic government is preferable

- Whether respondents are willing or unwilling to live under a non-democratic government which can impose law and order, and deliver houses and jobs.

2. Whether some responses to the normative questions cluster together and, if they do, the implications.

1. Respondents can be placed into one of five mutually exclusive and collectively exhaustive categories, based on responses to questions about (a) the understanding of democracy, (b) the orientation towards it and (c) willingness or unwillingness to live under a non-elected government which delivers law and order, houses and jobs [2] :

- Consistent democrats.  These are people who recognise the concept of democracy and can define at least one characteristic of it, who regard democracy as preferable and are unwilling to live under a non-democratic government even if it can impose law and order and deliver houses and jobs.  These are 26% of the total.

- Conditional democrats.   These are people who recognise the concept of democracy and define at least one characteristic of it in positive terms, who regard democracy as preferable, but are willing to live under a non-democratic government if it can impose law and order and deliver houses and jobs.  For them, authoritarianism is acceptable if it delivers, but democracy is preferred.  These are 45% of the total.

- The uncertain.  These are people who cannot either recognise the concept of democracy or assign it a meaning, or who have no opinion about whether a democracy is preferable or not or who have no opinion about whether they are willing to live under a non-democratic government if it can impose law and order and deliver houses and jobs.  These are 5% of the total.

Table 1 sets out the distributions by population group and socio-economic status.

There are significant [3] associations between category and population group and category and socio-economic status.  Asians are most likely to be consistent democrats and Whites the least likely.  Blacks are most likely to be conditional democrats and Whites the least likely.  The poorest socio-economic quintile are more likely to be conditional democrats than the other four quintiles.  Authoritarianism is more prevalent in the three top quintiles than in the bottom two and, not surprisingly, the highest proportion of the ‘don’t knows’ are in the bottom quintile.

2. Factor analysis [5] shows that most of the normative responses [6] cluster into two sets:

The two factor scores show little correlation, so it is not the case that all respondents who reject authoritarian systems are committed to checks and balances, and vice versa.

Table 2 – The distribution of respondents across political system

Lower factor scores imply high constitutional conformity.  All that can be said about Table 3 is that the ‘Don’t knows’ prefer more authoritarian political systems.

The analysis indicates a low level of coherence in normative political attitudes.  Coherence would require:

The first brief found a fairly high degree of constitutionally conforming responses among the Afrobarometer respondents.  This brief demonstrates that these responses can be regarded as intuitively based, rather than resulting from a coherent view of how and why the components of our constitutional democracy are related. This conclusion qualifies the relatively optimistic conclusions of the first brief, and it suggests that much needs to be done to develop a coherent civic culture compatible with our constitution.

The calculation of the political system and checks and balances factors

Appendix 2 of the first brief explains how factors clustering variables can be obtained from ordinal categorical responses, by first calculating a polychoric correlation matrix and then applying a factor analysis.  Factors are a predominantly a function of the variables they cluster and correlation coefficients between factor and the variables associated with them are called factor loadings.

The variables on which the factor analysis is based are:

Figure 1 displays the factor loadings and demonstrates the clustering of variables. 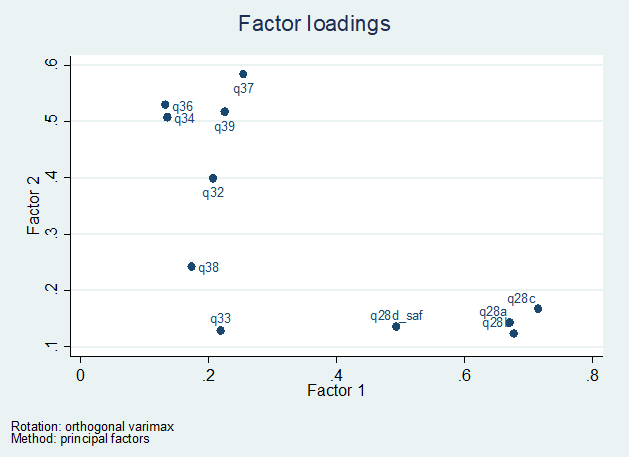 [1] For a list of the Survey questions under consideration, see Appendix 1 of the first brief

[4] Only two countries rated as partly free or not free had incomes per capita higher then $10 000 in purchasing power parity dollars in 2016:  Equatorial Guinea (population 1.2 million) and Gabon (population 1.9 million). Both are oil producing countries, which are not known for an even spread of a high quality of life.

[5] Details are provided in the Appendix.

Democracy and popular political norms in South Africa (I)

Two innovations in the 2019 budget