The double standards that the ANC and the EFF have with regard to the mask-incident involving a reporter of the eNCA TV news channel are astonishing. Both parties demand that action be taken against the news channel as well as the journalist, Lyndsay Dentlinger.

Today in a letter to the Speaker of Parliament, the FF Plus pointed out that the recent interviews conducted by the reporter demonstrate that she treats all her interviewees in the same way.

I was personally also interviewed by the said reporter on the 18th of February in front of the parliamentary buildings after President Cyril Ramaphosa's reply to the debate on his SONA.

I wanted to remove my mask, but Ms Dentlinger immediately insisted that I must put it back on. I was interviewed while wearing my mask. The same goes for other white Members of Parliament, like Geordin Hill-Lewis and Natasha Mazzone from the DA.

That does not constitute racist preferential treatment. The apparently offensive incident must be seen in light of the immense pressure under which TV reporters have to work during live news broadcasts.

The practice of some news channels, like the SABC, to conduct interviews on parliamentary grounds entails that the interviewee and the interviewer are not required to wear masks, but that social distance must be maintained and the microphone is sanitized in between interviews.

The fact that the ANC and the EFF are trying to make a racist incident of the event where black Members of Parliament were asked to keep their masks on while the same was not asked of two white Members of Parliament is, thus, a tragic denial of reality and shows that these parties will go out of their way to create racial dissent.

The racist statements and conduct of the EFF and its leadership are well documented and various organisations and political parties, including the FF Plus, have lodged numerous complaints about it with organisations like the Human Rights Commission (HRC).

The ANC blatantly discriminates, in an institutionalised manner, against minorities and the most recent example of this is President Cyril Ramaphosa's announcement that struggling white-owned tourism enterprises will be excluded from receiving aid from the Tourism Equity Fund, which is aimed at helping the industry get back on its feet.

The ANC and EFF's victimisation of the reporter is, in the FF Plus's view, unfair and unacceptable. 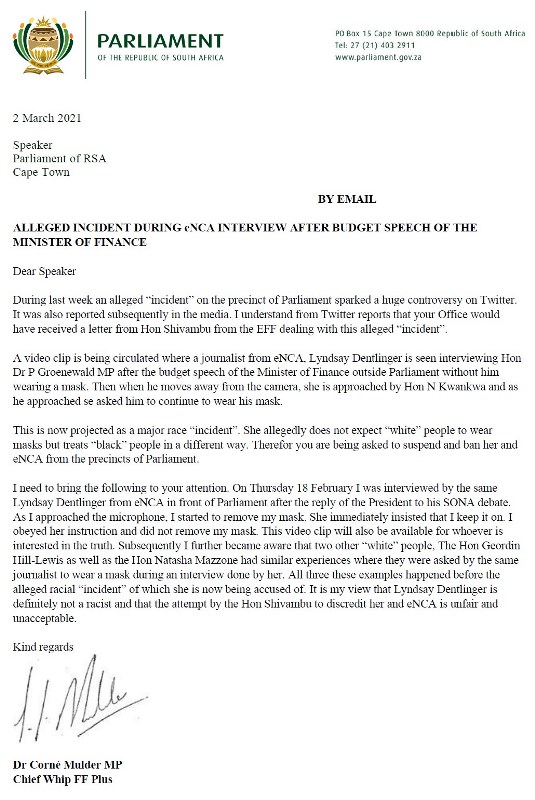 Another attack on Afrikaans education – FF Plus

AZ vaccine debacle: Mkhize must repay R120m himself – FF Plus

Eskom:Govt can no longer evade the problem – FF Plus

The real purpose of the EWC and Expropriation Bills – Anthea Jeffery