Age-standardised excess death rate: Indirectly age-standardised excess death rates have been calculated for each province to adjust the crude death rates per capita for the differences in distribution of the population by age. The adjustment factor for each province is calculated as the crude death rate for South Africa divided by what the crude rate for South Africa would have been had the age distribution of the population been that of the province. Standardisation for age is necessary when comparing populations that differ in their age structure because age has a powerful influence on the risk of dying. The rate is based on the cumulative number of excess deaths since 3 May 2020 to date divided by the population estimate for 2021 and has not been annualised.

Actual number of deaths: The actual number of deaths in South Africa have been estimated from the numbers recorded on the National Population Register using weighting factors set to produce results consistent with those of the annual Rapid Mortality Surveillance Report to account for deaths of persons who are not on the National Population Register as well as those that have not been registered with the Department of Home Affairs. The adjustments to account for incompleteness of recording of deaths on the NPR have been re-estimated for the 2021 reports taking into account the 2017 cause-of-death data released by Stats SA in 2020. A methodological note briefly outlining the changes can be downloaded with this report from the SAMRC website: https://www.samrc.ac.za/reports/report-weekly-deaths-south-africa.

Epi-week: The Weekly Death Reports in 2020 used weeks from 1 January and ran from Wednesday to Tuesday. In setting up the monitoring for 2021, we recast the data to report by an ‘Epi-week’ consistent with CDC and many NICD reports which run from Sunday to Saturday, ensuring continuity of weeks from one year to the next. Each week is aligned with the ‘Epi-year’ that has 4 or more days in that week. Week 53 of 2020 is from 27 December 2020 to 2 January 2021 and Week 1 of 2021 is 3 January – 9 January 2021.

Excess deaths: There is no universal definition of, or understanding of what is meant by, “excess mortality”. It is a term used in epidemiology and public health that refers to the number of deaths that are occurring above what we would normally expect. The WHO uses the term to describe “Mortality above what would be expected based on the non-crisis mortality rate in the population of interest. Excess mortality is thus mortality that is attributable to the crisis conditions. It can be expressed as a rate (the difference between observed and non-crisis mortality rates), or as a total number of excess deaths.”

Warning: The Department of Home Affairs has faced sporadic temporary office closures, particularly in areas that are more affected by COVID-19. This may affect our allocation of a death to a metro area. For example, a death that occurred in the City of Cape Town might have been registered at an office outside of the City because of a temporary closure. Closure may also cause a delay in the processing of the death registration which would result in an underestimate of the deaths in the most recent week. This accounts for the kinks in what should otherwise be a smooth increase in numbers of deaths in Cape Town and Buffalo City, for example.

This report provides estimates of the weekly number of deaths of person 1+ years in South Africa for epidemiological Week 19 of 2021, covering the period 9 - 15 May 2021.

While preparing predicted numbers of weekly deaths for 2021, enhancements have been made to the estimation process. The estimates now take into account the release of vital registration data to include registrations up to the close of 2017. They also ensure that the national estimate of excess deaths is consistent with the sum of the estimates for the provinces. Reporting has changed to ‘Epi-weeks’ that run from Sunday to Saturday, which will align with other weekly reports and enable us to lessen the lag in reporting.

The main methodological change introduced in the 2021 reporting is that predicted values for 2020 and 2021 are based on death data for the period 2014-2019, instead of data for 2018 and 2019 as was done for 2020 estimates. After reviewing trends in the data, separate negative binomial models have been fitted to the unnatural deaths, the natural deaths for each of KwaZulu-Natal and Western Cape, and for natural deaths for the 7 other provinces in a combined model to provide estimates by age, sex and epi-week for each year.

A prediction interval has been estimated on the basis of the variability in the observed weekly data for each reported domain. The data for both 2020 and 2021 have been recast and both years will be reported with a cumulative total of excess deaths taken from the week starting 3 May 2020, considered to be the point of rapid increase in excess deaths associated with the COVID-19 pandemic in South Africa.

Except for KwaZulu-Natal (and eThekwini in particular), where the additional VR data identified substantial missing late registrations from the 2015 data, the impact of the changes is relatively small. Predicted values for the metropolitan areas are still based on data from 2018 and 2019 as the trends in the sub- provincial data need further investigation to develop a comprehensive district-level model.

A brief methodological note outlining the changes that have been made for monitoring deaths during 2021 can be downloaded with this report from the SAMRC website as well as a spreadsheet with estimated values: https://www.samrc.ac.za/reports/report-weekly-deaths-south-africa.

Phase 2 of the vaccination programme, targeting persons 60 years and older in addition to health care workers, began on 17 May 2021. The table below, shows that in the weeks leading up to the vaccination roll- out, there have been about 1,200-1,400 excess deaths from natural causes among persons 60+ years.

In Week 19 (9 - 15 May 2021), the numbers of deaths from natural causes in Free State and Northern Cape are concerningly high. North West, Gauteng and Mpumalanga are showing indications of an uptick in the past week.

As most of the metropolitan areas are tracking to the predicted numbers of natural deaths, the excess deaths appear to be a result of slow burn in non-metro areas in the country.

Per capita excess death rates have been calculated for the provinces to scale the cumulative deaths for the population size of each province (Table 1). By the end of Week 19 (9 - 15 May 2021), the national excess death rate was 269 per 100,000 population.

The weekly number of deaths from unnatural causes have continued to track close to the predicted numbers, with the month-end peaks being higher and in February and March reaching the upper prediction bound.

Table 1: Number of excess natural deaths of persons 1+ years by province and metro relative to revised predicted number based on the observed drop during lockdown, South Africa 2020/21

Note: Period has been determined based on when an upturn in the number of natural deaths became apparent. Parts do not sum to the whole because office closures due to Covid-19 may have led to registration of deaths at other offices which may not be in the same area, and random fluctuation at the point at which the baseline is determined.

Table 2: Number of excess deaths from all causes of persons 1+ years by province and metro relative to predicted number based on historical trend, South Africa 2020/21 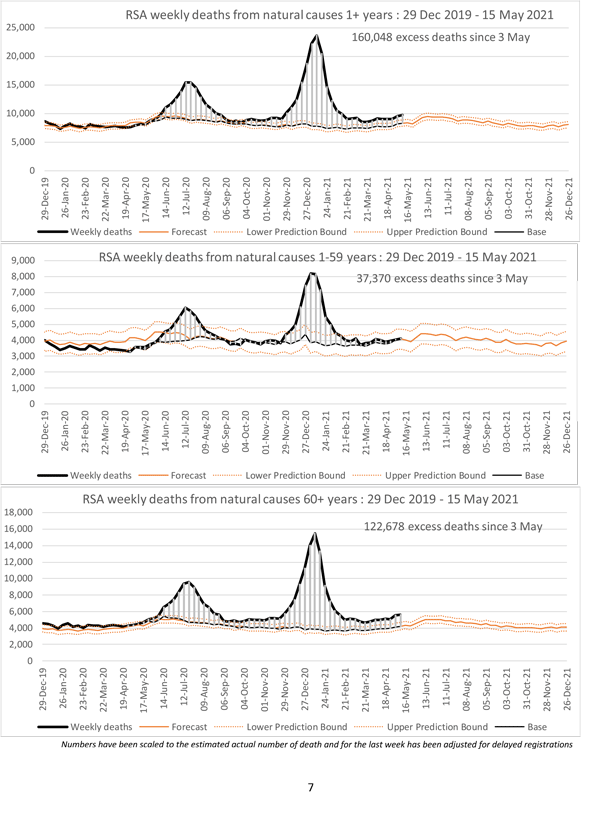 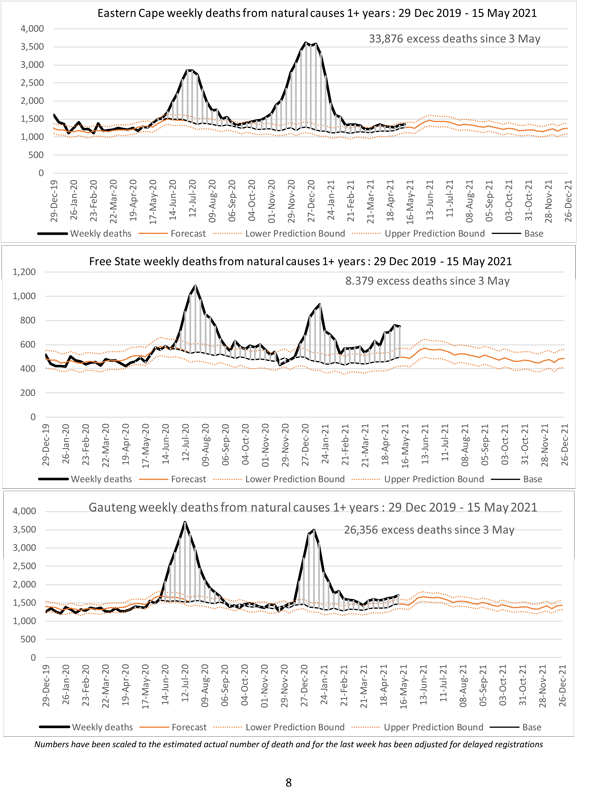 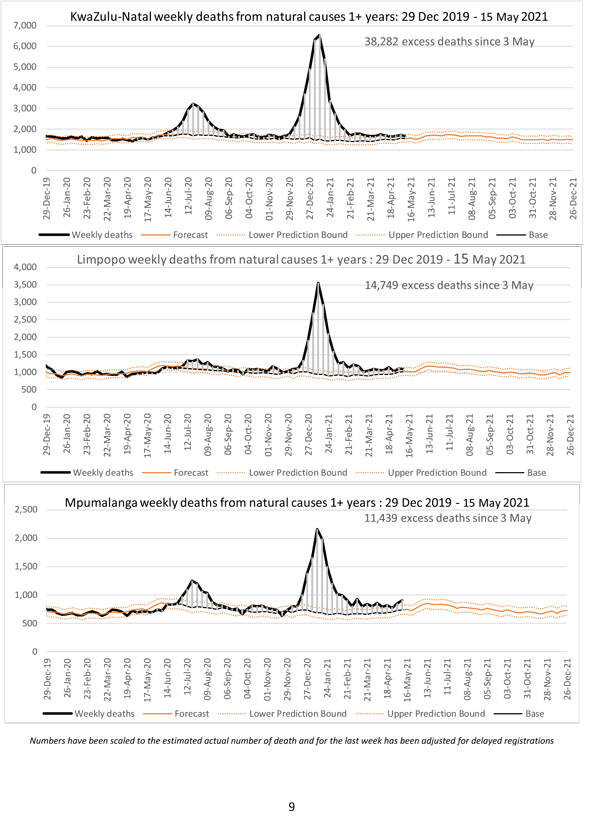 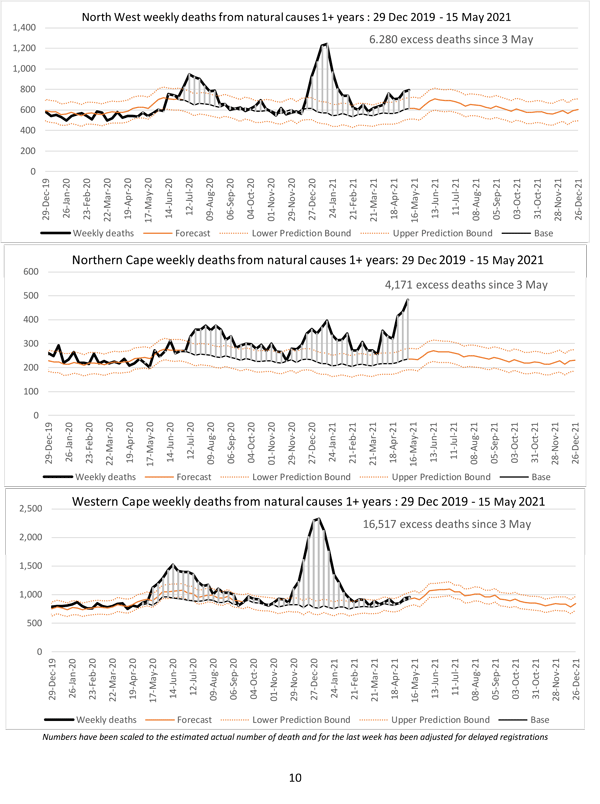 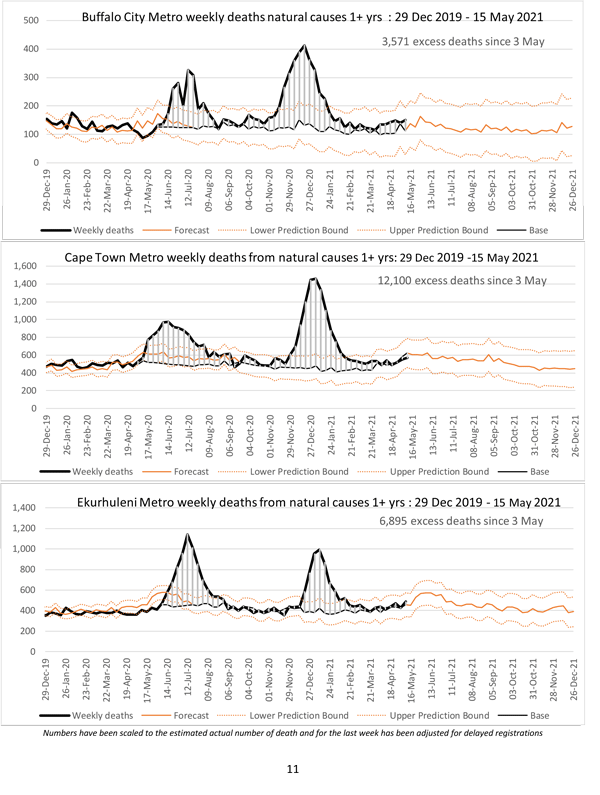 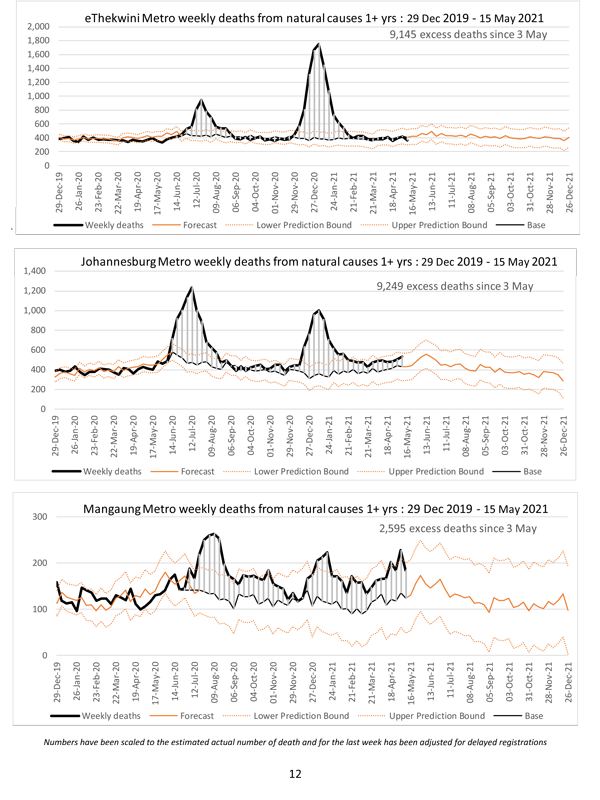 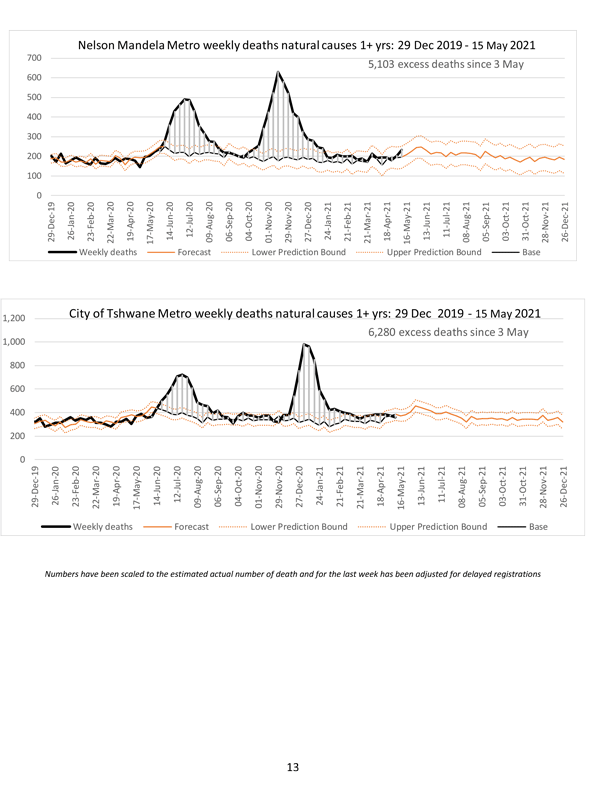 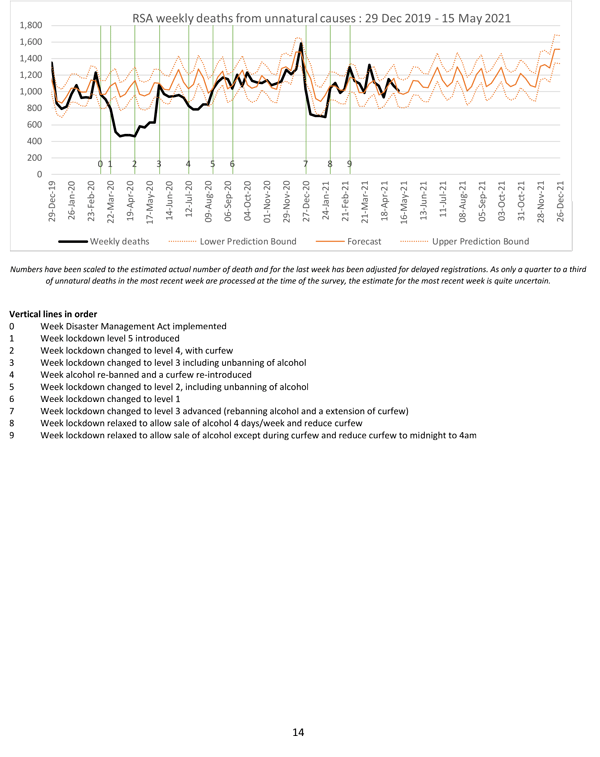