GCIS vs the Daily Sun: The Press Ombudsman's ruling

Government Communication and Information System (GCIS) and others vs. Daily Sun

Ruling by the Press Ombudsman

This ruling is based on the written submissions of Phumla Williams (from GCIS), T Kalamore (for the Department of Cooperative Governance and Traditional Affairs, CoGTA), Grace van Rensburg, Xolani Sibiya, Sandile Gwamanda and Joseph Gillespie, and the publisher of the Daily Sun newspaper, Jeremy Gordin.

They collectively complain about two pictures on the front page of Daily Sun, published on October 29 and November 6 this year respectively.

The GCIS complains that the second picture was insensitive, inconsiderate, caused discomfort to society, was dehumanising and lacked compassion. CoGTA, together with other complainants, voices its concern that both pictures exposed society, including children, to an extreme form of violence, adding that it desentisised people to violent crimes.

Some complainants add that such graphic pictures, if they have to be published, should not be exhibited on the front page.

I am considering these complaints in one ruling as they speak to the same issue.

The pictures in dispute

The first story, headlined Residents' Rage!, was about angry people who killed an alleged robber (allegedly stealing a cellphone) because they did not trust the police to protect them. The picture of this corpse filled half the front page and was published in colour above the fold. He was lying on his side with his upper body and head in a pool of blood (facing the camera), with a car tyre covering the side of his face - which was in full view, with his mouth open and his eyes staring into nothing. 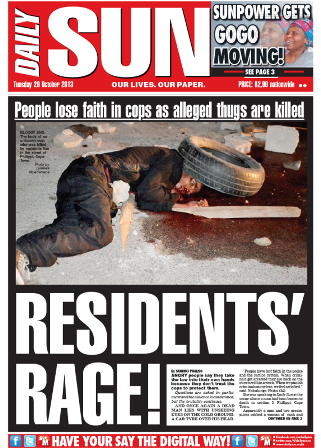 The caption read: "Bloody end: The body of an unknown man who was killed by residents lies in the street of Philippi, Cape Town."

The second article was headlined ‘A curse on Khutsong! - Traditional healer warns of ‘spiritual revenge' as sangoma is burned alive. This person, identified in both the story and the caption as James Magagula, was killed by angry residents after he had been accused of supplying muthi "to safeguard thugs from arrest". (Khutsong is near Carletonville.)

The picture was used in the same space as the first one, also in colour, and showed the near naked body of a person on his back with his legs spread out, his arms in the air - and the whole of his face burning (covered in flames).

This caption said: "This picture shows the burning body of sangoma James Magagula, who was killed by Khutsong residents on Sunday... The People's Paper is publishing the picture to show what happens in communities where there is no rule of law and justice is just a word."

Section 9 of the Press Code is relevant. It reads: "Due care and responsibility shall be exercised by the press with regard to the presentation of brutality, violence and suffering."

Gordin says that the newspaper is fully cognizant of this clause. He adds that they held a full discussion on this matter, which was attended by all senior staffers, including one deputy editor, the news editor and himself. They talked "in great detail for more than 20 minutes about what ought to be done with the horrific video..." (the picture was grabbed from that video recording which it had received from a member of the public). 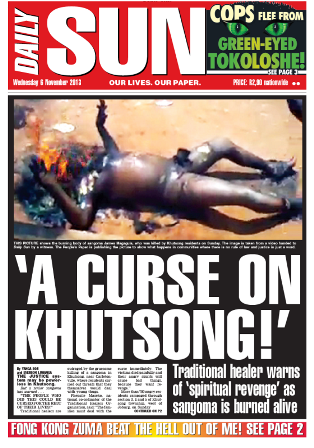 The publisher states that it was the consensus that:

the video (picture) was in the public interest (read: the lawlessness of township societies and everything that it entailed);

they decided not to make the video available to the public, due to the horrific nature thereof; and

they should be careful in its presentation of the image, and to focus on the outrage of traditional healers regarding what had happened to one of their own.

He argues: "...we felt that an ‘example' should be made of the horror that happens when people lose faith in the country's justice system - and accordingly decided to carry the picture of this unidentified...man. We were not happy about it - but felt it had to be done."

Gordin concludes that Daily Sun has indeed adhered to Section 9 of the Code.

The basic reason why the South African press has instituted its own regulating body is not only to ensure that freedom of expression/speech is protected, but also that this freedom does not entail that "anything goes" - it has to be accompanied with some sort of responsibility.

I note with appreciation that the newspaper discussed this matter on its highest level. That is commendable, and should be general practice. However, the mere fact that an issue was discussed, even in detail, does not guarantee a sound ethical outcome.

I also recognize that the words "care" and "responsibility" are general terms and value judgments that should be applied to specific cases, taking the particular circumstances, news value, public interest and the family and loved ones of the deceased into account.

It speaks for itself that these value judgments will differ from person to person.

However, this does not mean that there are no guidelines and even principles to consider. As always, the concerns of individual citizens have to be weighed up against public interest.

The basic principle in this instance is that the more well-known a person is, the more leeway the press has of publishing explicit pictures. For example, in 1966 South Africa's Prime Minister was stabbed to death in Parliament. Just about every newspaper in the country published his bloody body in colour on their front pages. The public interest was so overriding that this was deemed to be acceptable.

However, this would not have been the case when a largely unknown person was murdered.

We therefore need to make an important distinction between the person involved and the issue at hand, cognizant of the fact that this distinction may become blurred at times (as happened in the case mentioned above). This is the point: The less well-known a person is, the less "freedom" the press has of identifying the body. Conversely, the more a matter is in the public interest, the greater the responsibility of the press to report on that issue and its freedom to be more explicit.

It really becomes a weighing-up of avoiding unnecessary harm against striving for the truth (see the Preamble to the Press Code).

In the cases at hand, none of the victims were public figures. The issue was in the public interest, yes, so there is no debate as to the question if the Daily Sun should have covered the incidents. The only question is how it should have been done.

In these cases, I believe that the newspaper should not have identified the bodies and instead should have avoided causing unnecessary harm to their loved-ones by:

I received an email from Ms Nahima Ahmed, saying that the parents of the deceased person in the first photograph identified their son from the picture in the Daily Sun... This really is atrocious.

Taking all of the above into account, I cannot find any justification for the publication of either picture so prominently, in colour, on the front page and identifying the corpses by either using a name or by showing a face. The picture of the sangoma was particularly horrific and offensive.

This office should guard against the radical shifting of ethical goalposts such as in these cases, and it is doing so now in no uncertain terms. The pictures were both unacceptable, caused people unnecessary harm, and shifted the borders of ethical journalism beyond appropriate standards.

I also take into account that these pictures were in full view of children.

The publication of both pictures are in breach of Section 9 of the Press Code (as cited above).

Daily Sun is directed to unconditionally apologise to the public for the publication of the pictures.

The newspaper is directed to use 50% of its editorial space on the front page to state the following:

Our Complaints Procedures lay down that within seven working days of receipt of this decision, either party may apply for leave to appeal to the Chair of Appeals, Judge Bernard Ngoepe, fully setting out the grounds for the application. He can be contacted at [email protected].

'A curse on Khutsong!' - Daily Sun