The 2020 South African State of the Nation address (SONA) by President Cyril Ramaphosa finds him in a difficult time as South Africa is characterised by numerous pressing challenges including struggling state-owned enterprises, poor economic performance and outlook, high levels of corruption, regular disruptive and violent forms of protest action, and unacceptably high levels of unemployment, inequality and poverty.

An unenterprising state of affairs

Among state-owned enterprises, Eskom’s inability to maintain the national grid probably represents the predominant concern at present. This enduring electricity crisis has contributed significantly to South Africa’s deteriorating economic circumstances. Yet the situation with other state-owned enterprises is also critical.  South African Airways (SAA) was placed under business rescue in late 2019, while military technology and defence company Denel had to receive a R1.8 billion injection from government in August 2019 in order to pay salaries and suppliers (Khumalo, 2019). In October last year, National Treasury provided a R2.1 billion bailout to assist the battling South African Broadcasting Corporation (SABC), with another R1.1 billion scheduled to be released once the broadcaster complies with certain preconditions.

There are various reasons for the dismal situation of the state-owned entities. According to the Presidential State-Owned Entities Review Committee (PRC) Report (2012), the South African legislative and policy framework under which SOEs operate is fragmented and often contradictory. The current legal framework ‘does not facilitate the execution of the fiduciary duties of these entities satisfactorily’. Arguably, the current legislative and policy framework constrains many SOEs from performing their developmental, strategic and socioeconomic functions’.

Eight years later, however, the SOE landscape has not improved because the critical legislative framework and policy challenges confronting SOEs remains to be addressed (Kanyane, 2018). Arguably, ff the Presidential Review Commission on State Owned Entities recommendations had been given timely and serious consideration, some governance failures and the extent of state capture may have been more limited.

Civil society and political commentators argue that continued corruption and lack of skilled leadership continue to be significant contributors to the poor performance among SOEs. For instance, the Ahmed Kathrada Foundation lobbied late last year for the government to extradite the Guptas from their self-imposed exile and hold them to account for their alleged role in state capture, notably of several socio-economically strategic SOEs. Against this backdrop, the President’s SONA must express clear support for law enforcement agencies’ to bring the Guptas before the Commission of Inquiry on State Capture (Mavuso, 2020) and the courts.  Mkhwanazi (2020) believes that “Eskom, the economy, corruption and crime will top President Ramaphosa’s to-do-list”.

There is an urgent need to increase the fight against corruption and to come up with concrete plans to fix the economy. The President’s appointment of Andre de Ruyter as Eskom’s new CEO, based on the Board’s recommendation, is acknowledged. It remains to be seen whether de Ruyter will be able to successfully rescue the power utility, especially in the face of strong union opposition.

Further efforts by the President include talks about the controversial proposed agreement between government, business and labour to use funds from the Public Investment Commission (PIC), the Development Bank of Southern Africa and the Unemployment Insurance Fund to pay Eskom’s debt (Mkhwanazi, 2020). While the government debates the merits of this proposal, many South Africans’ and businesses have to confront the far-reaching economic and social impacts of load shedding.

This unfavourable situation has resulted in public protest action across South Africa. On 11 February, Klipspruit residents in Soweto barricaded roads with burning tyres and rocks, making roads inaccessible to motorists (Lindeque, 2020). The police indicated that the demonstration is related to electricity problems. This type of protest action is not new and many scholars have argued that these protests are a result of organisational failure to provide satisfactory basic services, while others maintain that citizen satisfaction is also a function of expectations of government’s performance (Davids, Roberts &Struwig, 2016; Masiya, Davids&Mangai, 2019). Government must therefore address the concerns of citizens to prevent escalating protest actions.

Unemployment, inequality and poverty are other major challenges of the South Africa government in its quest to create a better life for all. For instance, South Africa’s unemployment rate increased from 29 percent in June 2019 to an all-time high of 29.1 percent in September 2019 (Stats SA, 2019b). It is unlikely that the economy will grow fast enough to create the necessary jobs to reduce unemployment.

This is indeed a disconcerting prospect for the many young South Africans entering the labour market in search of decent employment to improve their lives. Available data indicated that youth unemployment stood at 38.6 percent in the third quarter of 2017. This was 10 points higher than the national average. The level of youth unemployment is extremely worrisome, despite the President confirming in 2018 that job creation for the youth would form a central pillar of national policy (SAHRC, 2018). Growing numbers of retrenchments – such as Telkom - will also lead to an increase in unemployment rates.

South Africa continues to rank as one of the most unequal countries in the world, despite a decline of the per-capita expenditure Gini coefficient of 0.67 in 2006 to 0.65 in 2015. According to the most recent household expenditure survey produced by Stats SA, the Living Conditions Survey (LCS) 2014/15, the Gini coefficient of household per capita income is well above 0.6 and this high level of inequality has been characterised since 1993 (Stats SA, 2019).

The Gini coefficient for wealth inequality in South Africa is incredibly high at approximately 0.95, largely a consequence of structural injustices inherited from apartheid-era law and policy. An average black African household holds about 4% of wealth held by an average white household, while an average coloured household holds about 6% of the wealth held by its white counterparts. Moreover, wealth inequality appears to be increasing at a much faster rate than income inequality (South African Human Rights Commission, 2018: 28).

The voice of the people: Public opinion on the real state of the nation

We base our assessment in this brief on views of the South African population captured in the South African Social Attitude Survey (SASAS) series. The survey series has been conducted by the HSRC on an annual basis since 2003, and is nationally representative of the adult population aged 16 years or older living in private residence. The sample for each round of surveying consisted of 500 Population Census Small Area Layers (SALs) as primary sampling units, stratified by province, geographical sub-type and majority population group.

In each of the sampled localities, seven visiting points were randomly selected for interviewing, followed by the random selection of a single, age-eligible member in each household using a Kish grid. Questionnaires were administered using face-to-face interviewing in the respondent’s language of choice. The realised sample size was for each survey round ranges between 2500 and 3300. Data for this study is freely available online through the HSRC website. The research instruments and protocols were approved by the HSRC Research Ethics Committee.

Satisfaction with democracy, 2003-2018/19 (%): Growing discontent with the functioning of democracy in South Africa, despite an improvement with the transition to the Ramaphosa administration. 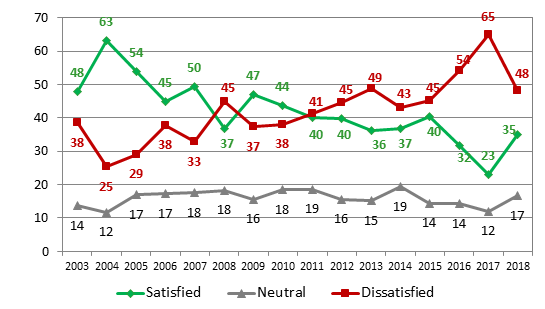 Question phrasing: ‘How satisfied are you with the way democracy is working in South Africa? ‘ 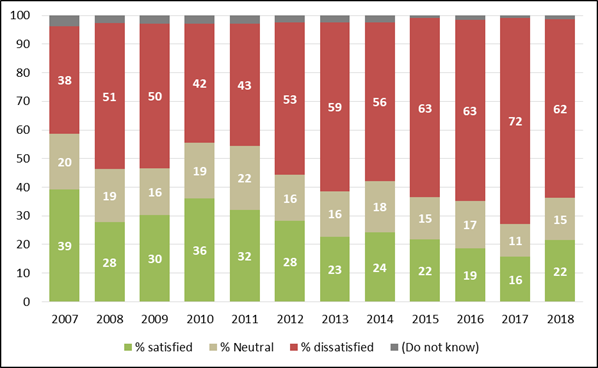 Question phrasing: ‘How satisfied or dissatisfied are you with the general economic situation in South Africa at present?’

Satisfaction with government-provided services, 2003-18 (%). Robust satisfaction with social grant provision, and education to a lesser degree. Declining trends with electricity, water and sanitation and refuse removal. Persisting broad-based discontent with job creation and crime reduction, together with critical views on the provision of affordable housing. 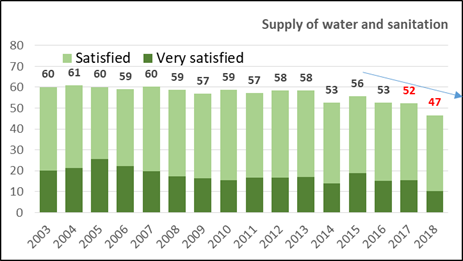 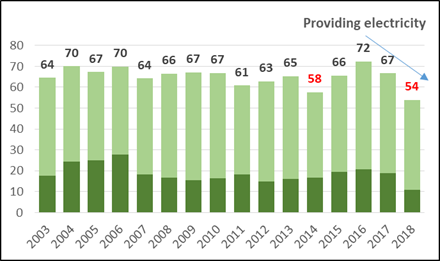 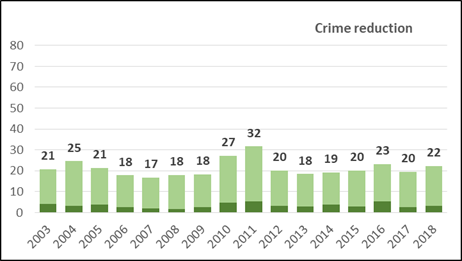 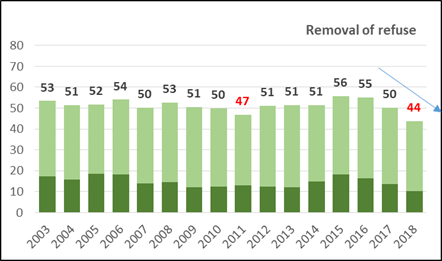 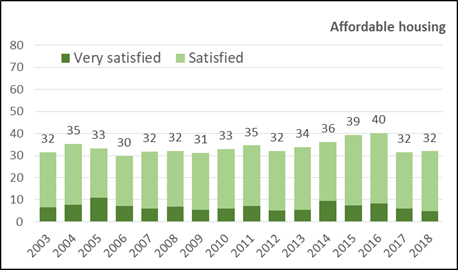 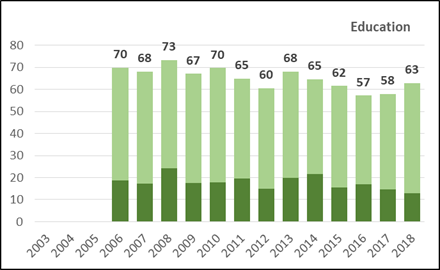 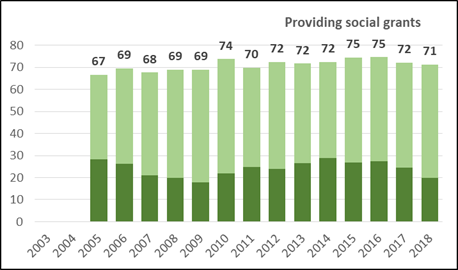 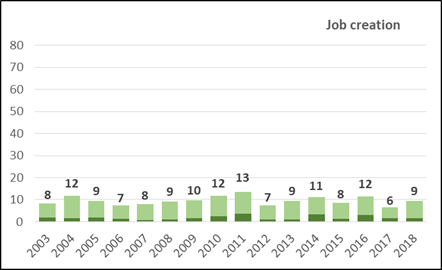 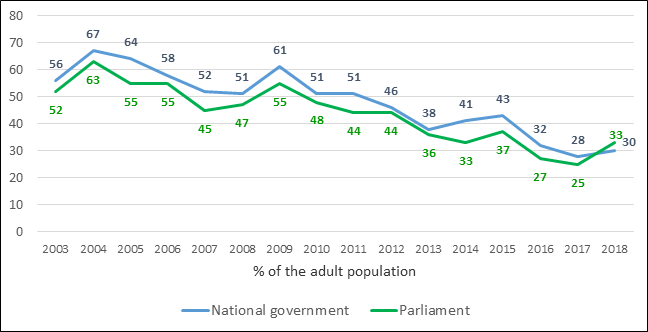 Question phrasing: “To what extent do you trust or distrust the following institutions in South Africa at present?” (% strongly trust/trust)

Energy concern in South Africa, 2017/18 (%):  South Africans display high levels of worry about different aspects of energy supply in the country, with pricing and power interruptions the top concerns. 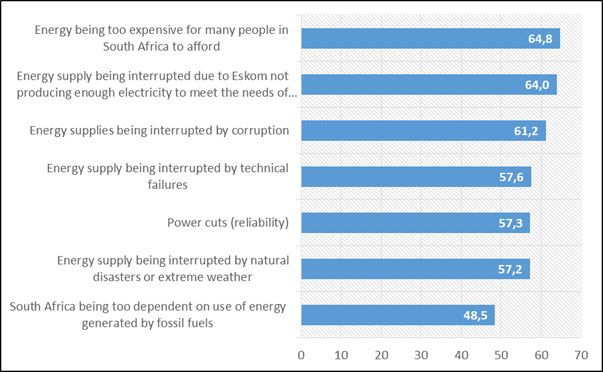 Energy supply preferences: “How much of the electricity used in South Africa should be generated from the following energy sources?” (large /very large share)

- Moderate support for wind and hydroelectric power; much lower support for gas, biomass and nuclear. Partly related to more circumscribed awareness of these sources.

Thuma mina, masinyane! A need to rapidly roll up the sleeves

From this research conducted by the Human Sciences Research Council, it appears that South Africans do not believe that the government can adequately navigate the country under the weight of the present socio-economic challenges. The South African government, and President Ramaphosain particular in his upcoming State of the Nation address, must outline decisive action to curb the escalating economic challenges and ensure that government at all levels improves upon its performance. However, widespread public distrust in government will make it even more difficult for President Ramaphosa to convince South Africans of government’s ability to turn the tide. Symbolically, SONA 2020 is also an opportunity for President Ramaphosa to signal to the nation that he has a clear and decisive plan of action to ensure the implementation of the ANC priorities as announced following the January 8th meeting. More important, does the President have the will or power to adjust and adapt his party’s policy preferences as required in order to address the concerns of all South Africans?

Gender-based-violence: Research community must step up to the challenge - HSRC