Cape Town | The South African Medical Research Council (SAMRC) regularly publishes the Report on Weekly Deaths in South Africa, published every Wednesday by the SAMRC’s Burden of Disease Research Unit, these reports include information on both natural (age, disease, infection) and unnatural deaths registered on the national population register.

In the past weeks, the numbers have shown a relentless increase – by the second week of July, there were 59% more deaths from natural causes than would have been expected based on historical data. It also means that reported deaths have shown a pattern that is completely different to those indicated by historical trends.

According to Prof Debbie Bradshaw, Chief Specialist Scientist and a co-author of the Report, the timing and geographic pattern leaves no room to question whether this is associated with the COVID-19 epidemic. “However, the weekly death reports have revealed a huge discrepancy between the country’s confirmed COVID-19 deaths and number of excess natural deaths,” said Bradshaw.

In order to provide close to real time insight into changes in mortality, the Burden of Disease Research Unit collaborates with UCT’s Centre for Actuarial Research (CARe) to analyse the numbers of deaths registered by the Department of Home Affairs on the National Population Register, while providing weekly reports of the number of deaths in South Africa. Although done in some developed countries, South Africa is one of the few middle-income countries able to do this.

On lessons learnt in the context of COVID-19 in South Africa, Bradshaw says the weekly death reports have contributed important information to compliment other data on the unfolding of the epidemic. The report was able to confirm that no epidemics had occurred prior to the first COVID-19 cases identified by the National Institute for Communicable Diseases (NIICD) and the country’s first death announced by Health Minister, Dr Zweli Mkhize in March. It was through these reports that the early growth of the epidemic in Cape Town and the Western Cape was confirmed, followed by the spread in Nelson Mandela Bay and the Eastern Cape.

The surveillance also highlighted the rapid decrease in unnatural deaths with the implementation of a hard lockdown, and the return to usual numbers following the lifting of a hard lockdown and the restrictions on alcohol, with a sudden increase in the first week of June. The rise in numbers of deaths from natural causes in July in Gauteng has confirmed that the epidemic has set in the province.

Tracking weekly excess deaths is not a new phenomenon –several countries in the developed world have been reporting these trends, particularly to assess the impact of influenza. With the outbreak of the COVID-19 pandemic, more countries have started doing this. Such analyses have generally demonstrated that during the pandemic, countries experience excess numbers of deaths over and above confirmed COVID-19 deaths.

In the UK, for example, it was realised that the confirmed COVID-19 deaths reflected only the COVID-19 deaths that occurred in the health services and that deaths that occurred in long-term care institutions and at home were not included in their COVID-19 statistics. However, given the availability of cause of death data from the death registration process in the UK, they were able to add such deaths to their confirmed COVID-19 statistics. Nonetheless, there are still excess deaths over and above these COVID-19 deaths, which are assumed to be deaths from conditions that might normally have been diagnosed and treated had their hospitals not been overwhelmed.

Excess deaths are calculated in different ways. Some analysts take the excess above the expected number based on historical data while others take the number above a threshold such as the upper prediction bound i.e. significantly higher than expected. In general, these excess deaths are calculated using all-cause mortality. It is considered that excess deaths would comprise COVID-19 deaths that are confirmed, COVID-19 deaths that have not been confirmed as well as other deaths that may arise from conditions that might normally have been diagnosed and treated had the public been willing and able to access health care.

Faced with the challenge that South Africa had a stringent lockdown in the very early stage of the epidemic and that unnatural deaths are a higher proportion of the all-cause mortality (and were impacted very significantly by the stringent lockdown), the SAMRC-UCT team thought it was necessary to use a different approach.

To quantify the impact of the COVID-19 epidemic on South African deaths, it was decided to focus on deaths from natural causes and remove the impact of changes in the unnatural deaths. The team also thought it would be necessary to consider that the lockdown had reduced the number of natural deaths. Thus, a baseline was chosen that was consistent with the level that the number of natural deaths was tracking prior to the uptick in the trend.

According to Professor Glenda Gray, SAMRC President and CEO, “the SAMRC has been tracking mortality for decades in South Africa, and this system has identified excess deaths associated with the COVID-19 epidemic. These may be attributed to both COVID-19 deaths as well non-COVID-19 due to other diseases such as TB, HIV and non-communicable diseases, as health services are re-orientated to support this health crisis.”

In the context of the emerging COVID-19 pandemic, it has become essential to track the weekly number of deaths that occur. Deaths recorded on the National Population Register are provided to the SAMRC on a weekly basis. These have been scaled up to estimate the actual number of deaths by accounting for the people who are not on the population register and the under-registration of deaths. The estimated numbers are compared with the number that would be expected based on the historical data from 2018 and 2019. The number of deaths of persons 1-year and older are reported because birth registration was put on hold during lockdown stage 5 affecting the number of infant deaths recorded on this system. The start date of each week is represented on the graph. 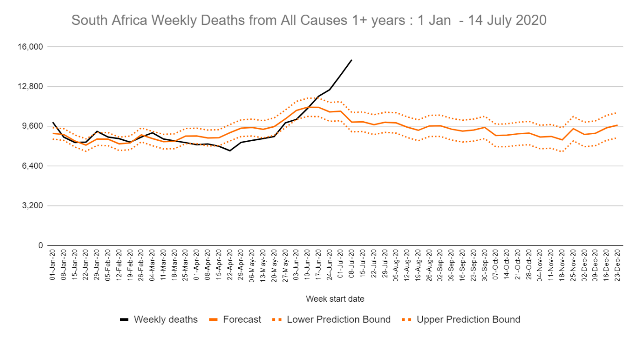 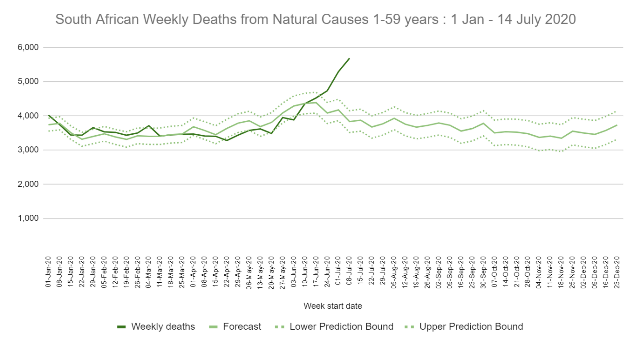 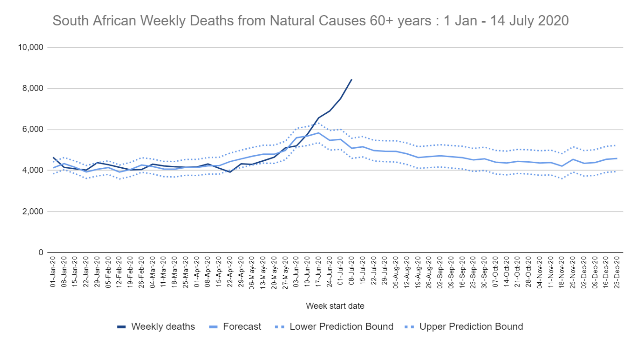