This letter and request are prompted by a recent article on the Politicsweb website, written under the nom de plume Ratcatcher and titled Panyaza Lesufi: Addicted to non-racialism, or race-baiting?

The article, a link to which is given above, details actions of MEC for Education in Gauteng, Panyaza Lesufi, and Deputy Director-General and spokesman for the Department of Home Affairs, Mayihlome Tshwete, in response to an apparent ‘outing’ of white racism at the Koeitjies & Kalfies crèche in Centurion. We would respectfully ask that you peruse that article, taking particular note of the postings by Lesufi and Tshwete that are copied therein.

In what follows, references (for example [Note 1]) are to numbered items in the attached Annexure.

If what is detailed in the article is correct - and it is hard to doubt the veracity of Ratcatcher’s report since it is supported by copies of actual social media postings by the various players, including those of Lesufi and Tshwete - then both are guilty of most reprehensible race baiting. That they have chosen to target a relatively weak and powerless body makes their actions all the more repugnant.

The facts of this case are to be found in the article and we shall, therefore, not repeat them here. Two salient points are worth expanding upon, however.

Our first observation: Lesufi and Tshwete have disseminated on social media a series of seriously intemperate accusations of racism directed at caregivers at the Koeitjies & Kalfies crèche [Note 2]. It is a concern that in a society such as ours, with its present heightened sensitivity to matters of race, an accusation of racism may prove deeply injurious to its target, regardless of whether the accusation has merit or not. It is surely imperative that such accusations only be made after a responsible, fair and sufficiently careful investigation of the facts.

In the event, we have seen no evidence that their actions were preceded by such careful examination of the facts. The accusations were evidently based on a single photograph that appeared on social media, which seems to have been misinterpreted - a plausible and innocent explanation of events was already available in the public domain, but was evidently disregarded [Note 1].

In this regard, we have two observations. The first is that, even if the two men had established the truth of the allegations to their own satisfaction, their subsequent action should surely have followed properly-regulated procedure designed to protect the rights of citizens suspected but not convicted of an offence. However, having decided that this was an instance of white racism [Note 2], Lesufi and Tshwete

- provided details of the name and location of the crèche, and

- Lesufi placed an invitation on his Facebook page to join him in a visit to its premises, not clarifying what was intended once they were there. Perhaps a clue to his intentions are to be found in another Facebook message posted by him, with a picture of himself, taken from the street-side and showing the crèche, Lesufi boasting that he might have to ‘jump fences’ [Note 4]. An implication of this remark is that he was preparing for some sort of violent confrontation. This from a provincial minister approaching a crèche with a few female caregivers and toddlers. A disturbing extension of this was provided in a message posted by

Tshwete [Note 5], showing a prostrate person being sjambokked and bearing the words “some exclusive images of MEC Lesufi engaging with the management of the racist crèche.” This from the official spokesperson of the National Department of Home Affairs.

It is certainly reasonable to infer that Lesufi’s and Tshwete’s actions were intended to intimidate and frighten those at the crèche. But regardless of their intention, given the postings by Lesufi and Tshwete referred to above, the danger of harm to those in the crèche - psychological or even physical - if a number of angry people turned up, was significant.

In addition to this, Lesufi and Tshwete’s questionable impugning of its caregivers and the crèche without due process may, in all likelihood, have caused harm to the crèche’s reputation and threatened its future viability. It would also have exposed the white employees of the crèche to the danger of attacks - on social media, in telephone or cell phone calls, by way of graffiti, possibly shouted abuse. These dangers are real and not simply imagined. In an article titled 'My racial nightmare' written by the school's principal, Anéll Engelbrecht, in response to the accusations of racism and published on Politicsweb [here], Engelbrecht says:

"Thobo’s actions threaten the existence of our school. My life is threatened and so is that of my family. I receive racist calls threatening to set my school alight and to come and sort me out. I receive e-mails calling me inhumane, a racist and an embarrassment to Christians!"

The Thobo referred to here is Thobo Wanatsha Mosinyi, the mother of the black child appearing in the photograph and the person who first posted accusations of racism on social media. Since Lesufi and Tshwete were responsible for the wide dissemination of these accusations, they must share some responsibility for the alleged threats and hurtful comments directed at Engelbrecht, her family and her school.

Whilst the actions of Mosinyi are most regrettable and quite possibly actionable, mitigating factors are present in her case, for as parents we fully understand the fury of mother who believes her child to be the victim of mistreatment and who takes to the keyboard too hastily. No such mitigating factors pertain to the conduct of Lesufi and Tshwete, however. Indeed, we would submit that it is reasonable to hold the actions of a senior member of government and a senior civil servant to a higher standard than those of other players.

The actions of the MEC and DDG were not just inappropriate, highly irresponsible and dangerous; they smacked of inciting mob justice.

Our second observation: Lesufi expresses “disgust” at the fact that the main caregivers and children in this little crèche (without the little girl who was black and had been withdrawn by her mother) were all white. The tweet in which this opinion is expressed makes it clear that his disgust derives from the particular racial group to which they belong (white) and not from their actions.

In summary, we believe that, at the very least, the actions of the Gauteng MEC for Education and the Deputy Director General in the Department of Home Affairs have:

- Infringed the right of both caregivers and children in the crèche to be fairly treated [constitution 33(1)].

- Violated the right of the caregivers, but especially of the children, not to be exposed to threats and intimidation and to be put in harm’s way.

- Exposed the young children to unfavourable attention by relaying and distributing an unredacted image of them on social media;

- Impugned the dignity and infringed the right to equal treatment of those in the crèche by circulating on Twitter contemptuous remarks about their race. This from a provincial minister.

We are not legally trained and may, therefore, not be presenting our request in the form that you would require or prefer. If that is the case, could we ask for your indulgence, and that you please consider the facts as related in the Ratcatcher article and evidenced in the various twitter messages referred to therein and determine which human rights have been infringed. Could you then also take the appropriate corrective measures.

Thank you very much,

1. In a statement* (circulated by Thobo Wanatsha Mosinyi - the aggrieved mother - on her Facebook page), the owner of the crèche, Anéll Engelbrecht, offers an account of the facts underpinning the incident:

a) There were only 8 [out of 10] children in the class yesterday.

b) A table can only seat six children.

d) N [full name redacted by PW] walked to the playground instead with another little girl.

e) After placing the children, the teacher asked the assistant to bring the two girls.

f) She then placed both at the table next to them.

g) As she was about to take the photo, the other little girl started crying and the teacher asked the assistant to pick her up.

h) The photo was taken at that moment.

i) If you zoom into the photo you will see that N is holding a cupcake in her hand with no icing because her teacher removed it for her. She doesn’t like icing.

j) With these photos were also other photos where N is taking part in class activities and where her teacher is helping her.

k) The photo in question unfortunately does not tell the true story.

*For a voice version of this statement:

Whether one chooses to believe the statement or not, it does offer a coherent and innocuous explanation of the scene in the photograph. There is also mention of other photographs which, Engelbrecht contends, demonstrate equal and caring treatment of the little girl. If Lesufi, or a representative of his Department, had approached the crèche for a response to Mosinyi’s accusations, the above account and photographs would surely have been provided.

Yet Lesufi gives no indication of having seen and evaluated this evidence before launching his attacks and accusations of racism. Indeed, he was already commencing his plan to go to the crèche at 11:26 on Thursday morning, June 23rd, the morning on which he had received the complaint from Mosinyi.

2. There are many references to the alleged racist nature of the crèche. Here is one, posted at 11:52 on Thursday 23 June: 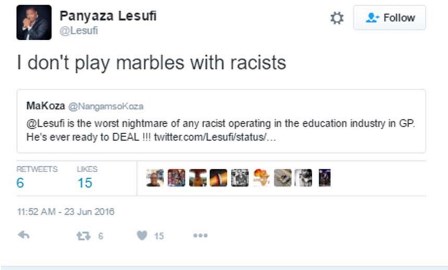 3. Lesufi, on Facebook, identified the crèche and extended an invitation to join him there: 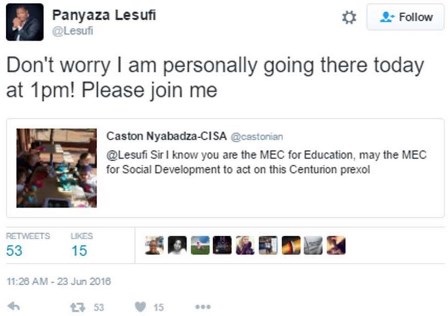 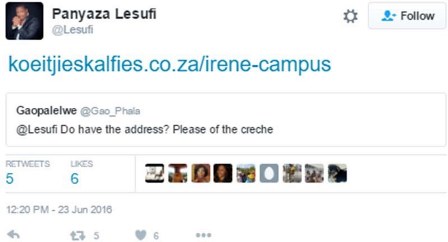 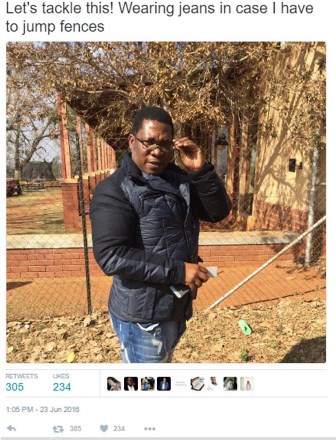 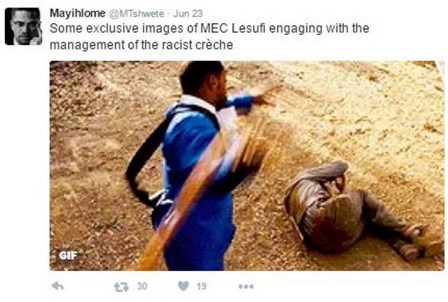