The civil rights organisation AfriForum accuses the Nelson Mandela Foundation (NMF) of currently playing a polarising role, being dishonest and of seriously harming the image of former President Nelson Mandela as reconciler. AfriForum appeals to the NMF to give up their search for vengeance and to rather work together with AfriForum in establishing a society of mutual recognition and respect between communities.

According to Kallie Kriel, CEO of AfriForum, the NMF’s allegation is untrue that they had tried to work with AfriForum and that AfriForum had refused.

“The opposite is true, in fact. AfriForum’s legal team wrote a letter to the NMF’s legal team on 4 September 2018, requesting a discussion to ensure that an ‘amicable outcome as opposed to one that is a divisive one’ is reached. AfriForum also asked for cooperation to prevent the dispute from deteriorating, ‘which could further polarise our country’s diverse communities – something that we should work together to avoid’. I was shocked when the NMF refused our hand of friendship and their legal team replied: '[O]ur client has instructed us to reject your client's request’,” Kriel says. (Copies of the correspondence are attached.)

Kriel says it is tragic that the NMF is willing to spread blatant lies – which directly leads to polarisation and division in the country – by falsely pretending that an Afrikaans organisation like AfriForum is apparently not committed to dialogue.

Referring to the NMF’s indication that it wants to act against Ernst Roets, AfriForum’s Head of Policy and Action, because of his “contempt of court”, Kriel says that this is also an indication that the NMF’s longing for banning and censorship is so great that they even want to prosecute people like Roets, who acted within the framework of the court’s guidelines. “The court said that the flag may be used for journalistic and academic purposes. The NMF now wants to apply this ban even harsher through their witch-hunt on Roets, a doctoral student of law, because he dared to ask an academic legal question of whether he had broken the law, by asking this question together with an image of the old flag,” Kriel adds.

According to Kriel, the NMF’s witch-hunt is indeed the type of behaviour against which AfriForum warned when, in the interest of freedom of speech, it decided to oppose the banning and censoring of symbols. Kriel also points out that AfriForum warned that the NMF’s action would give a new life and even cult status to a flag that had fallen into disuse by wanting to ban it. “Our society now reaps the bitter fruits of the NMF’s polarising actions,” Kriel says.

Text of the letter:

1. We refer to your letter dated 29 August 2018 addressed to the Honourable Mojapelo DJP.

2. The purpose of this letter is –

a. to reaffirm AfriForum’s position with regard to the subject matter of this complaint, being the gratuitous display of the previous official flag of the Republic of South Africa (“the 1928 flag”) by members of the public as part of rallies, protests and even in private; and

b. to propose a possible way forward in respect of the matter to reach an amicable outcome as opposed to one that is divisive.

3. Our client, from the outset, made its position with regard to the 1928 Flag clear.

4. In this regard we quote from our clients answering affidavit:

“6. At the outset we acknowledge that the old South African flag has the capacity to cause offence and emotional distress. As an organisation we have no particular love for the flag or what it represents. In the exceptionally rare instance that anyone participating in one of our events, brings an old flag with them, we ask them to put it away.

7. Having expressed that we have no interest in using the old flag, we are of the view that a wide reaching ban would be an unconstitutional infringement of the right to freedom of expression…”

5. Our client is concerned that within the environment of adversarial litigation, the process could descent into an acrimonious public dispute which could further polarise our country’s diverse communities – something that we should work together to avoid.

6. Our client does not want embark on litigation that has the effect of further polarising the diverse communities within South Africa.

7. Although our client is a litigation party in this regard, with all its rights reserved, it does not detract from the nature of our client’s conviction that issues such as these could preferably be resolved through processes of dialogue.

8. In this regard our client’s track record with regard to litigation on matters of great potential emotional impact that could jeopardise inter-communal relations is clear.

9. In the matter of AfriForum and Another vs Julius Sello Malema and the ANC, our client was the complainant in an Equality Court complaint heard within the very same court on the words “Dubula iBhunu” from a well- known struggle song.

10. After success in the Gauteng Local Division, our client, having being requested by the President of the Supreme Court of Appeal to consider the possibility of mediation in a potentially divisive and polarising matter, agreed to a process of mediation.

11. The mediation led to the conclusion of an agreement between our client, Mr. Julius Malema and the ANC at the time, which had the effect that parties agreed to –

a. a continued process of dialogue; and

b. the promotion of mutual recognition and respect; whilst

c. committing themselves to self-restraint and the education of their respective membership bases in order to foster better understanding for the experiences of parties on the receiving end of potentially hurtful or harmful conduct.

12. With the above in mind, it is our client’s view that the matter at hand is indeed a matter that could be dealt with in a similar fashion.

13. In this regard our client is not necessarily opposed to the Human Rights Commission’s commitment to develop our legislation in accordance with the Constitution. We would however prefer not to have this matter deteriorate into a two-side legal contest with only winners and losers, given the fact that this is a matter that could be resolved through dialogue.

14. The purpose of this letter therefore is to propose to the Human Rights Commission and also to the other litigating parties in this matter to consider the possibility of staying the proceedings in order to allow the parties to the litigation the opportunity of engaging within a process of independent mediation.

15. Parties could also, as part of such process of dialogue or mediation, consider the inclusion the views of the different parties with regard to the development of existing legislation with regard to hate speech in conformity with the Constitution. Should there be agreement that PEPUDA in its current form is unconstitutional, in certain respects the parties could agree on a joint way forward to address the alleged unconstitutionality.

16. We have decided to make this proposal at this juncture in order to give all parties a timeous opportunity to consider this alternative approach to the way forward, before further founding papers, opposing papers and replies are filed, interlocutory applications, and case management meetings follow.

Looking forward to receiving your comments on the proposal suggested above. 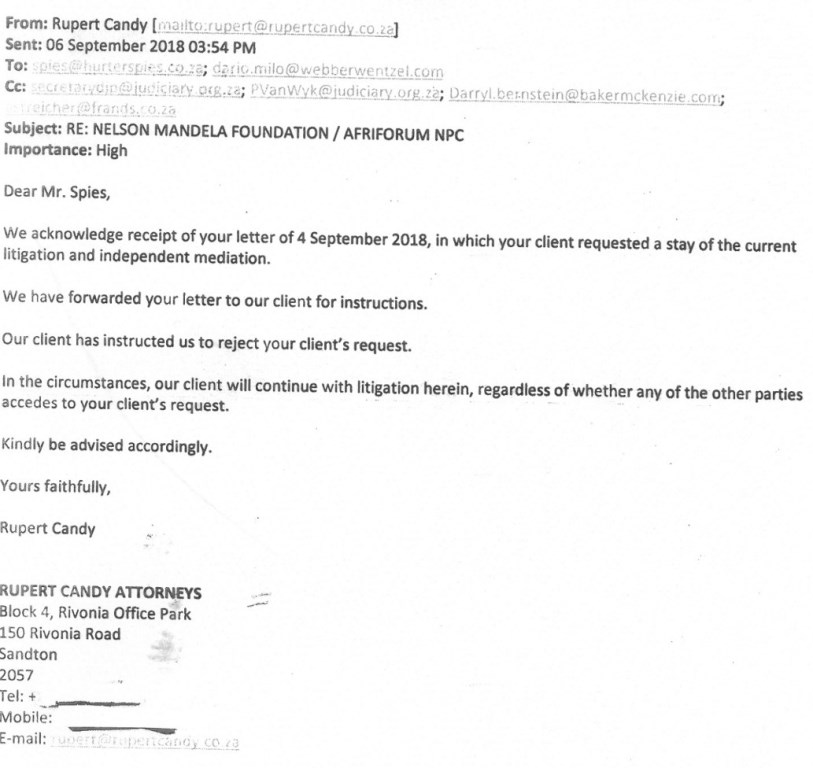 Old SA flag a symbol of a crime against humanity – NMF

Why the NHI terrifies me

Goldman Sachs banking on SA in drive to tap into Africa