The white owned media has unleashed a massive campaign against the truth. It hides white corruption and racism of white monopoly capital and attacks whoever is fighting this injustice. Right now people like the journalist, Peter Bruce, are manufacturing fake news against even the Public Protector, Advocate Busisiwe Mkhwebane, because she has ruled that ABSA must pay back the money.

BLF also notes the truthless reports against Mineral Resources Minister, Mosebenzi Zwane. This is because he has announced a Mining Charter which empowers blacks against white monopoly capital.

We ask Peter Bruce, why has he disappeared the big corruption at Treasury of over R4.3 billion? Also, where is the report on the more than R100 million corruption by KPMG at Treasury?

BLF further asks, why has the white media not reported on its front pages about the R100 million corruption admitted by DSTV and in respect of which it was made by the Competition Commission of South Africa to pay a fine. The media is hiding the corruption of people like Johann Rupert, who stole money just like ABSA, from the South African Reserve Bank.

The media will not be allowed to be biased and all journalists who are propagandists for white monopoly capital must be named and shamed. We want the truth!

BLF will be conducting protest action against Peter Bruce and will start today by picketing him under the following details:

Our general position is that we respect the freedom of expression and we defend it in terms of the media. However,there can be no freedom to distort; to lie; to manufacture news; and to mount unjustifiable campaigns.

It is clear that these campaigns are being run against President Zuma because of his stance on land; Minister Mosebenzi Zwane because of the Mining Charter; and the Public Protector because of her findings that say that ABSA must pay back the money.

White owned media has decided to vilify – to basically damage all of us who stand against white monopoly capital. Those that constitute the white media are no longer journalists; they are hit men and women of white monopoly capital. Insofar as they are determined to continue running such campaigns, we shall vigilantly use our democratic right to protest such an injustice.

Their right to freedom of expression does not extend to infringing upon our rights in terms of the Constitution. While the white owned media has the democratic right to freedom of expression, writing or speaking about any person or entity via the employment of lies – as is the case with Peter Bruce and the rest of the white owned media – is not a constitutional right. BLF in these circumstances will not hesitate to exercise its constitutional right to protest, as it has done on numerous occasions, including via picketing the wrongdoers.

BLF would like to warn the white owned media that should they continue to write lies as they are doing – to disappear real stories and manufacture lies – we shall continue to protest against their wrongful and criminal actions.

We will not be apologetic. Should Peter Bruce continue to run an anti black people agenda, he must go back home. Anyone who stands against Radical Economic Transformation (RET) is against black people and we are not going to allow them to sustain that project. If Peter Bruce is going to stand against the transformation that we stand for – for land, for mining and for the banks etc that must come to blacks – he must leave!

The white owned media is trying to play the game that Peter Bruce is an opinion writer and that he is not a journalist – that is utter rubbish! He is a senior news person. That is why he has two columns – one with the Business Day and one with the Sunday Times. His opinion counts. People believe that what he says is the truth. He therefore has no right to lie. Even if he is an opinion writer he is compelled to write the truth.

But he is not doing this and that is our problem! Furthermore, since he is a senior at both newspapers he should be in a position to influence the publication of stories, on the front pages of these papers, that expose white monopoly capital – but he does not do this. So his conduct has not absolved him from guilt at all! 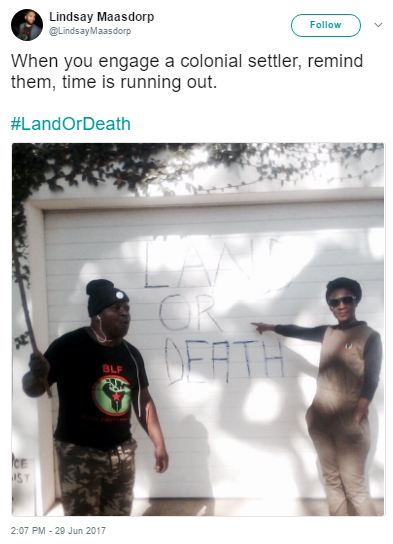 We take exception to BLF's conduct in parliament - ANC

If you’re not worried about an ANC power grab, you’re not paying attention

The return of race law

Curfew and booze ban are back - Cyril Ramaphosa