Company says this lays foundation for construction of new nuclear power plants with Russian VVER reactors with total installed capacity of up to 9,6 GW

On September 22, 2014 in Vienna, at the margins of 58th session of the International Atomic Energy Agency General Conference, the Russian Federation and the Republic of South Africa signed an Intergovernmental Agreement on Strategic Partnership and Cooperation in Nuclear Energy and Industry. On behalf of the Russian Government the document was signed by the Director General of the State Atomic Energy Corporation ROSATOM Mr. Sergey Kirienko, on behalf of the South-African Government - by the Minister of Energy Ms. Tina Joemat-Pettersson.

The Agreement lays the foundation for the large-scale nuclear power plant (NPP) procurement and development programme of South Africa based on the construction in RSA of new nuclear power plants with Russian VVER reactors with total installed capacity of up to 9,6 GW (up to 8 NPP units). These will be the first NPPs based on the Russian technology to be built on the African continent. The signed Agreement, besides the actual joint NPP construction, provides for comprehensive collaboration in other areas of nuclear power industry, including construction of a Russian-technology based multipurpose research reactor, assistance in the development of South-African nuclear infrastructure, education of South African nuclear specialists in Russian universities and other areas.

The joint implementation of this programme implies a broad localization of equipment for the new NPPs, which will provide for brand-new development of various areas of South-African high-tech industries, contribute to creation of new highly skilled workplaces and will allow South-African companies to further participate in ROSATOM's projects in third countries.

"I am convinced in cooperation with Russia, South Africa will gain all necessary competencies for the implementation of this large-scale national nuclear energy development programme. ROSATOM sees to create in South Africa a full-scale nuclear cluster of a world leader's level - from the front-end of nuclear fuel cycle up to engineering and power equipment manufacturing. In future this will allow to implement joint nuclear power projects in Africa and third countries. But from the very start this cooperation will be guided at providing the conditions for creation of thousands of new jobs and placing of a considerable order to local industrial enterprises worth at least 10 bln. dollars", ROSATOM's Director General Mr. Sergey Kirienko noticed.

According to Tina Joemat-Pettersson, "South Africa today, as never before, is interested in massive development of nuclear power, which is an important driver for the national economy growth. I am sure that cooperation with Russia will allow us to implement our ambitious plans for the creation by 2030 of 9,6 GW of new nuclear capacities based on modern and safe technologies. This agreement opens up the door for RSA to access Russian technologies, funding, infrastructure, and provides proper and solid platform for future extensive collaboration." 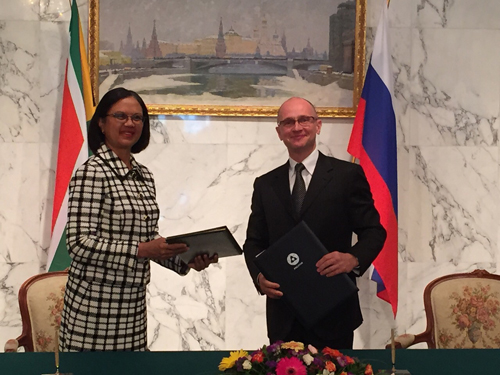 US Senate: ‘Establishment Covid-19 narrative is a lie’