Stephen Nel's donations to the DA: The facts - Jonathan Moakes

The facts of the DA donations from Mr Stephen Nel

Given the continued misleading and false reporting surrounding the question of whether or not the DA received funds from the Gupta family, there is a need to reiterate the facts of the matter.

1. Stephen Nel, an executive of Sahara Computers from Potchefstroom, was introduced to the DA by Chris Hattingh, DA Leader in the North West Province.

2. In 2008, Mr Nel agreed to a meeting with Helen Zille, Leader of the Democratic Alliance.

3. Ahead of the meeting on 13 February 2009, Mr Nel advised that the meeting venue had been changed to 5 Saxonwold Close, Saxonwold. Both Helen Zille and Ian Davidson (who accompanied Ms Zille to the appointment) were briefed by the fundraising department that they were meeting with an executive of Sahara Computers. There is nothing wrong with the fact that the DA approached this company for a donation. The Gupta family became controversial in 2010. (Sahara computers had sponsored a range of activities. The Newlands cricket grounds, for example are called Sahara Park Newlands).

The meeting took place on 13 February 2009 at 5 Saxonwold Close, which turned out to be the home of the Gupta family. Stephen Nel pledged to make a donation of R 200 000. There is nothing unusual about this. When companies decide not to donate to a political party, their senior executives sometimes do so in their personal capacity.

4. A follow-up meeting took place on 25 February 2009 to take receipt of a cheque for the amount of R 200 000 pledged at the meeting on 13 February 2009. Again, Mr Nel requested that the meeting take place at 5 Saxonwold Close. At the meeting, Mr Nel handed over a cheque to Ms Zille, which was later deposited into the account of the DA. The cheque was in the name of SJD Nel and drawn on an FNB account in Potchefstroom [click here for a copy of the cheque and deposit received from Mr Nel]. 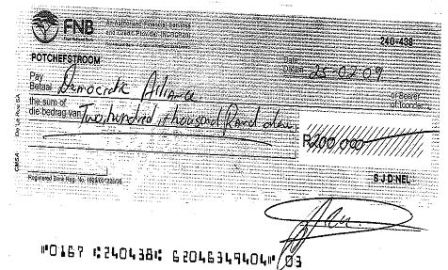 As Election Day approached, further funding appeals were sent to corporates and high net-worth individuals. As a result of the appeal, a further cheque for R 100 000 was received. The drawer's name was SJD Nel. The cheque was collected by Councillor Vasco Da Gama from Sahara's offices in Midrand on 05 May 2009 .

5. The DA's fund-raising department sent a standard letter of thanks and a payment advice form to everyone who had been at the meeting in February.

6. Following Election 2009, correspondence ensued between the fundraising department and Chris Hattingh as to whether the donations received had been from Sahara Computers or from Mr Nel in his private capacity. To clarify the matter, a fundraising executive contacted Mr Nel who indicated that both donations had been made in his personal capacity. As a result, the fundraising department closed its corporate file on Sahara Computers and opened up an individual file in the name of Stephen Nel.

7. In 2010, an appointment was scheduled for Helen Zille to see Mr Nel to request a donation for the party's preparations for the municipal elections in 2011. An appointment took place on 22 October 2010. Again, Mr Nel requested that the appointment take place at 5 Saxonwold Close. A pledge of R 100 000 was received at this appointment. The donation of R 100 000 was subsequently received via EFT from a company called Islandsite Investments.

9. On 28 January 2013, Helen Zille called Stephen Nel, who again affirmed that he had given money to the DA in his personal capacity because he "believes in what the DA stands for".

The bottom line is this:

The New Age: It's the Infogate scandal all over again - Helen Zille

FNB, the New Age and the Guptas - Helen Zille