On the parliamentary support structure

The parliamentary structure is more intricate than meets the eye. As it currently stands, Parliament has an entire support structure comprising of two supporting offices (the Parliamentary Budget Office and the Office of the Institutions Supporting Democracy), two branches (Core Business and Support Services) and an administration. This structure is subject to change every 5 years with the rise of each new Parliament. The new structure for the 6thParliament is yet to be finalised.

The Parliamentary Budget Office provides independent, objective and professional advice and analysis to Parliament on matters relating to the budget and other money Bills; while the Office of the Institutions Supporting Democracy facilitates and co-ordinates all engagements between Parliament and the institutions supporting democracy[1].

The Core Business branch of Parliament provides services for the proceedings of the National Assembly, the National Council of Provinces and their respective committees and joint committees. These services include procedural and legal advice; as well as analysis, information, research, language, content, secretarial and legislative drafting services. It further provides public education, information and access to support public participation. This branch also provides analysis, advice and content support for parliamentary international engagement.

The administration of Parliament provides for the management and administration of Parliament with the purpose of providing strategic leadership support, institutional policy, governance, development programmes for MPs, sector co-ordination, internal audit, and financial management. This group consists of the Office of the Secretary to Parliament, Legislative Sector Support, Strategic Management and Governance, Finance Management Office, Internal Audit, and the Registrar of Members’ Interests. 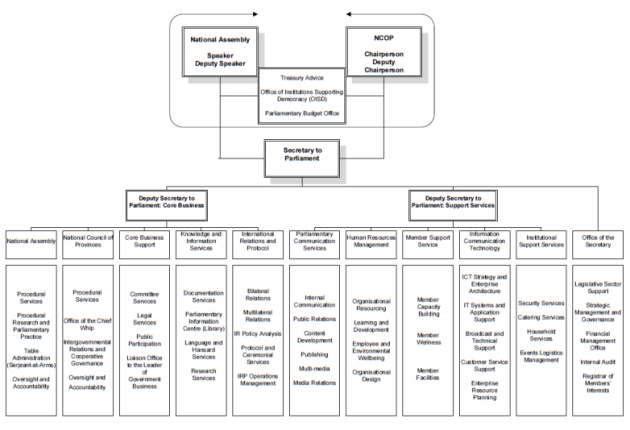 WORKINGS OF THE PARLIAMENTARY SUPPORT STRUCTURE

The employees of the support structure are the workhorses of Parliament. The researching and drafting of legislation (i.e. the main part of Parliament’s legislative function) is all done by either the executive or the parliamentary support structure. The MPs themselves do not draft legislation, but through parliamentary committees they may specify the principles to be embodied within it.

The inner workings of the support structure are very hierarchical. It is broken down into divisions, which are broken down into sections, which are then further broken down into units. Managers head up each division, section and unit. However, those at the lower levels (i.e. unit managers) are required to seek the authorisation of the higher level managers (i.e. divisional and sectional managers) in order to proceed with almost anything. This naturally has a debilitating effect on leadership at the lower levels, as well as on productivity and job satisfaction in the parliamentary support structure as a whole.

A report of the Joint Standing Committee on the Financial Management of Parliament[2] for the 2017/18 financial year revealed a high turnover rate and vacancies in the highly skilled category of the parliamentary support structure. 140 of the 1414 posts remained vacant in that year. The report further revealed that the staff turnover and vacancies affected the performance of Parliament’s Core Business branch. These two identified problems appear to stem from strained labour relations which have manifested themselves in increased litigation by Parliament against its employees. Add to that the protest suicide of Lennox Garane, a senior parliamentary manager in Parliament’s international relations unit, in September 2018, and the report’s finding that the work environment and conditions were unpleasant, and it becomes clear that all is not well in the parliamentary support structure.

The report recommends that an inquiry be held into the administration of the Fifth Parliament to establish the root cause of these strained labour relations so as not to carry them over into the Sixth Parliament. This recommendation is yet (and unlikely) to be carried out.

[1]Chapter 9 institutions and other statutory bodies such as:

· Commission for the Promotion and Protection of the Rights of Cultural, Religious and Linguistic Communities

[2]One of the most important committees holding Parliament to account which produces an annual report on the performance of the branches and administration of Parliament.

Letter sent to Speaker regarding removal of PP – HSF

Ivermectin approved for use in selected Covid-19 cases: Q&A