Minister Khumbudzo Ntshavheni: Update on government efforts of rebuilding and recovery efforts in the country

Fellow South Africans and members of the media

Over the past two weeks, our country made international and national headlines on the incidences of violence and looting which took place in predominantly in the Provinces of KwaZulu-Natal and Gauteng. As government, we can confidently state that our country has turned the tide and we are well on the trajectory of stability and we are rebuilding the economy and ensuring social cohesion. In the past 24 hours, we had no incidents of looting and violence in both Provinces.

Our stabilization efforts include ensuring that SAPS maintain high visibility in areas, which have a potential of resurgence of violence and looting.  SAPS are on high alert to respond quickly to intelligence they receive of those who are still planning to loot and destroy infrastructure.  On the other hand, members of the SANDF are working in collaboration with the SAPS in undertaking roadblocks, vehicle control points, undertaking foot and vehicle patrols, cordoning and searching vehicles, clearing roads which were blocked and protecting National Key points.

In terms of recovering stolen items, SAPS are undertaking home searches to recover stolen items.  This campaign is bearing fruits because a number of items have been recovered and these will be used as evidence when the suspects appear in court for counts of theft and looting.  We still call on the members of the community to come forward and give us information on those people that were involved in looting.  The members of the public must not take the law in their hand but they must report to the relevant law enforcement authorities who will follow up the looters.

We request the public to always be vigilant when receiving money. Never accept stained bank notes as they have likely been discoloured from ink dye used in security devices such as ATMs. Be on the lookout for discolouration along the edges, including black, purple, red and blue as well as combinations of these colours.  These bank notes can no longer be used as a means of payment.  The public is encouraged to report these bank notes to SAPS Crime stop number 086 00 10111 or by using the MySAPS app.

We reported in the past few days that there were number of arrests that were undertaken by the law enforcement agencies for incitement of violence, looting and public violence. We want to reiterate that those who have endangered our democracy have no place to hide, we will ensure that they face the might of the law.

The National Prosecuting Authority (NPA) has reported that about 200 suspects appeared in the various courts around Gauteng this week after being arrested in connection with looting and public violence. Some of these suspects are have been granted bail and some remanded in custody as the investigation are on-going.

Key suspects facing charges of incitement to commit public violence have appeared in various courts and remanded in custody for bail applications. One suspected handed himself over to the police in Durban after a warrant of arrest had been issued against him. He will be appearing in Randburg Magistrate Court in Johannesburg tomorrow.

Yesterday we confirmed that the vital N3 and N2 are back to normal functioning and by Sunday morning, the authorities reported that more than 100 trucks per hour were passing key checkpoints to Durban, with strong traffic from Durban to other South African destinations and neighbouring markets. We also reported that the mainline of the rail network (Johannesburg to Durban), as well as the Durban to Kroonstad line, as well as the Durban – Richards Bay railway. We also indicated that with agreement from industry, one line between Durban and Richards Bay was closed for routine maintenance. We also reported that the ports of Durban and Richards Bay are fully operational.

Large retail chains have reported that supply of food and other products to South African stores and neighbouring states affected by disruptions in supply- chains in Kwa-Zulu Natal, are largely back on track. South Africa’s three largest retail groups, with stores throughout the region noted that disruptions were mainly the result of the pressures on the N3 corridor from the Durban port and interruptions in supply from factories in KZN. Goods sourced from South African manufacturers elsewhere in the country have largely been unaffected.

Most shopping malls which were closed due to violence and looting, including the iconic Maponya mall in Soweto have re-opened their doors for the communities to start buying the necessities. The members of the South African National Defence Force (SANDF) and South African Police Service (SAPS) are patrolling various other shopping malls and ensuring that these resume trading safely.

In addition, the Minister of Trade, Industry and Competition has also issued an exemption from certain provisions of the Competition Act, to enable firms to collaborate and ensure availability of basic food and consumer items, emergency products, medical and hygiene supplies (including pharmaceutical products), refined petroleum products and emergency clean-up products.

The priority is to strengthen further the security of supply to KZN, other South African provinces and to neighbouring countries

The damage to factories and retail facilities in KZN will have a significant impact on the economy, jobs and access to goods and services. This impact will be felt both in KZN and across the rest of the country. Some production facilities have been damaged though fortunately most factories and suppliers’ facilities are intact.

Work is underway to assess the cost of the damage to property as a result of the unrests. SAPOA have provided estimates to the damages in KZN to the extent that the business owners who are its members have provided to date. According to these estimates, in KZN alone: 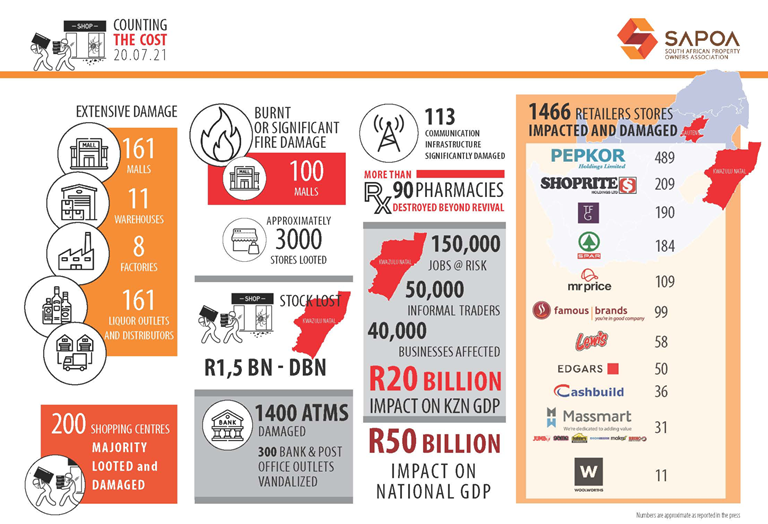 SAPOA will later in the week collate data on the cost of the damage in Gauteng, however, South African Special Risks Insurance Association (Sasria) will conduct an assessment on the full extent of the damage and the Economic Cluster of Ministers are consolidating proposals for the government package of intervention including for small businesses that are mostly uninsured. The Department of Small Business Development is work with both SAPOA, business associations such as NAFCOC, FABCOS, South African Franchisee Association, National Health Care Professionals Association and the South African Informal Traders Association to ensure the interventions also benefit small businesses. The package will include for poor households.

Government calls on everyone to be circumspect in what they post and share online. In this most trying period in our democracy there has been a disturbing trend where false information is deliberately circulated to drive a certain agenda. Those who post such fake or false news are intent on creating fear or panic. We cannot and must not allow those with malicious agendas to sow discord and disharmony.

Repeatedly in this period there have been cases where people have reposted and shared false or fake news in the form of pictures, videos, news links, public posts or voice notes. Many people have done so unaware that what they have shared is fake, false or downright dangerous. Government calls on everyone to think twice before simply sharing or reposting content you have received.

Fake or false news is often easy to spot. A simple Google search on a topic or occurrence will quickly reveal that was has been shared is fake or false.  Similarly, a reverse image search on Google will reveal if a picture has been used before.  This is an easy way to see if something that has been shared is relevant to a current issue or situation, or is an old image or video that is being used to inflame the current situation.

The official government website https://www.gov.za/ has all the latest news, speeches and statements about the work of government, as well as headline news. It is a one stop portal for news and information, and has a wealth of additional resources.

The Real 411  https://www.real411.org(link is external)/ (link is external)is a resource where you can report 4 types of digital offences namely, disinformation, hate speech, incitement to violence and journalist harassment.

Another useful resource is the MySAPS App, which is a free, crime-reporting mobile application available for smart phones on Google Play store and the Apple App store.
The App allows citizens to interact with law enforcement officials more effectively, by

Six key arrests have been made to date - Khumbudzo Ntshavheni

Yawning into the abyss

What were the Zuma insurrectionists thinking?

Attack on ivermectin – With insights from The Wall Street Journal

Willem Petzer: Getting SA to fight back against taxpayer abuse