Unfortunate our letter to Sikhakhane was leaked - SARS

SARS REPARATION PROCESS TO BE CONDUCTED WITH DIGNITY AND CONFIDENTIALITY

Pretoria, Tuesday 17 November 2020 - The media has requested confirmation that a SARS letter to Adv. Muzi Sikhakhane SC dated 16 November 2020, which was regrettably posted on social media, is authentic. SARS can confirm that a private letter was written to Adv. Sikhakhane SC as well to the CEO of KPMG, Mr. Ignatius Sehoole.

This communication to them clarified SARS’ position in respect of the Reports that each of them had authored during the period between 2014 to 2015, respectively. These Reports negatively mentioned or implicated a number of current and former SARS employees. Following an intensive review after Commissioner Kieswetter’s appointment in May 2019, and after taking into account a number of related developments, SARS has made a decision that it will not use these Reports for any purpose as it cannot place reliance on them.

One of the recommendations of the Nugent Commission was that SARS should consider reparations to current and former employees, not necessarily pecuniary in nature, who had been negatively impacted by actions taken as a consequence of the reports.

Throughout this process the Commissioner of SARS has always intended to manage the process with dignity and outside the public domain because it touches the lives of many of its current and former employees. It is therefore unfortunate that these private matters end up in the public domain and are often, to the detriment of affected individuals, sensationalised.

Since the Commissioner’s appointment in May 2019, SARS has engaged current employees on a number of levels to make reparations. Substantial progress has been made. SARS has also initiated a process to engage former SARS employees who may have been negatively affected by actions taken by SARS, and certain third parties, during the period between 2014 and 2018.

Given the trauma experienced by many, as a result of the unfortunate events during that period, a process of reflection and healing is necessary for SARS as an institution as well as for the individuals concerned.

The Commissioner continues to express the hope that the process will continue to be dignified and private, and he will therefore not divulge any information that is personal. SARS will conduct itself during the discussions in good faith, mutual respect and confidentiality and will not breach these principles in any way whatsoever.

We understand that the media is interested in the process, but we ask that the media respects the privacy and confidentiality of the reparation discussions, and the dignity of the individuals involved, and understands SARS’ position to decline to comment on specific issues.

SARS trusts that all parties involved in the reparations remain committed to achieving a solution in the best interest of the individuals, SARS and the country as a whole and will support SARS in its important work of restoring institutional integrity and public confidence. 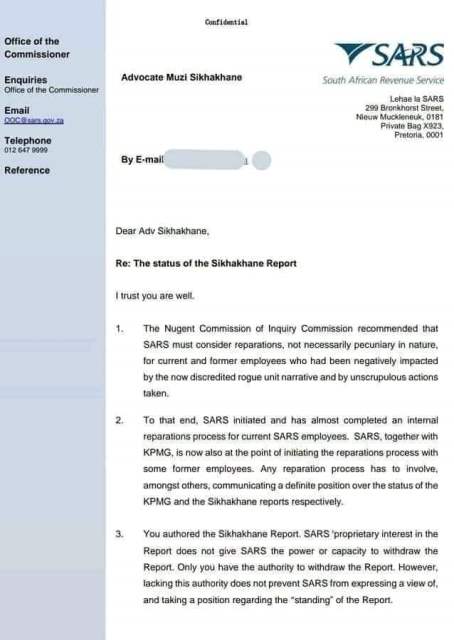 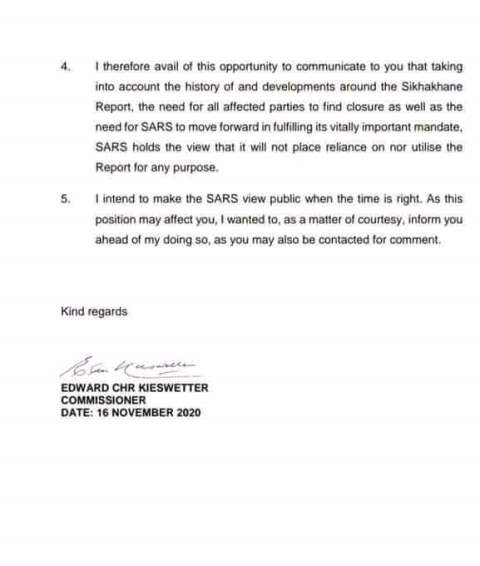 Why is SARS sitting on the Sikhakhane report? - Dion George