Who buys the Sunday Times?

Over the past week there has been something of a shakeup of the board of Avusa, the company which owns the Sunday Times. The Avusa chairman, Dumisa Ntsebeza, stepped down along with two other non-executive directors, and it is speculated in the press that CEO Prakash Desai may be on the way out as well.

The immediate cause of these ructions stem, apparently, from Capitau's bid for Avusa. The board obstructed the bid by refusing to grant Capitau an indefinite extension pending approval by Treasury and the South African Revenue Service of certain aspects of the transaction. This annoyed shareholders, a majority of whom want the Capitau deal to go through.

Further stoking shareholder dissatisfaction is, apparently, the poor financial performance of the group. Business Day reports that, according to some analysts, if one excludes the contribution made by the recently purchased UHC - now the Retail Services division - the rest of the Avusa group "has made a loss in the past four months."

According to Avusa's 2011 annual report (see here - PDF) the media division, which houses the Sunday Times, contributed R2,129bn (or 40%) of the group's revenue of R5,31bn. Much of this division's revenue is generated by the Sunday Times, though precise figures are hard to come by.

The key question is how the Sunday Times is doing, particularly in terms of circulation (which ultimately drives revenue)? Avusa has issued somewhat mixed signals in this regard recently. Over the past month the Sunday Times been offered as a freebie at Nu-Metro cinemas on a couple of occasions. And the newspaper has also run a promotion over the past two Sundays, at outlets across the country, where people can buy it for R1 rather than the usual R15 cover price.

Such generous promotions are surprising as - if you believe Avusa's public pronouncements on the matter - the Sunday Times' paid circulation is in rude health particularly when compared to its rivals. According to the company's annual results presentation while weekly newspaper circulation declined by 0,3% over the previous year "Avusa Media core circulation has grown - Sunday Times (400k)" and "Sunday Times grew circulation by 3,6%" (see here - PDF).

Indeed, the latest figures for the Sunday Times' paid for circulation from the Audit Bureau of Circulations (ABC) are remarkable for their stability. They are arguably a bit too stable for comfort or confidence. To understand why, it is necessary to go back a couple of years.

On September 7 2009 this website published an article - and a graph - pointing out the extraordinary consistency of the Sunday Times' circulation figures. Since the first quarter of 2000 the total paid circulation of the newspaper, as reported to the ABC, had remained at an average of 505,000 every quarter, give or take a thousand copies or so. Since 2006 this circulation range had narrowed even further.

Essentially what was happening was that far from the total paid circulation of the Sunday Times reflecting demand in the market Avusa was fixing the figure at a number of its own choosing. Declines in ‘core circulation' - a combination of copy sales and subscriptions - tended to be made up with increases in travel subscriptions, bulk and Print Media in Education (PMIE) giveaways (which have to be, in terms of ABC rules, paid for by independent sponsors or parties at 50% or more of the cover price.)

The article noted that "If one looks at the breakdown of the ABC figures for the Sunday Times, there are major fluctuations, over time, in each of these categories [that make up paid circulation]. Decreases (or increases) in individual sales, are always matched by an equivalent increase (or decrease) in giveaways. Whatever the fluctuations in each category, add them all together and the magic number of just over 504 000 is hit quarter-after-quarter."

However, it seems that, having made these adjustments, the Avusa circulation department has returned to its old habits. Since then the variation in the Sunday Times' quarter-on-quarter circulation has been minimal (see graph below and table here).

The year-on-year variation of the Sunday Times' total paid circulation was 784 (0.17%) compared with City Press -17,881 (-10.68%) and Rapport -34,102 (-12.38%). It is important to note that City Press and Rapport do not claim any paid circulation in the bulk, PMIE, and travel subscription categories. The number of business subscriptions claimed by those newspapers is also nominal.

It is difficult to tell for certain which components of the total paid circulation of the Sunday Times reflect lever pulling by Avusa, and which reflect real market demand for the newspaper. For instance, the reported overseas copy sales of the Sunday Times jump about like a jack in the box.

That the Sunday Times is apparently still setting its own total paid circulation, despite being called out on it once, suggests that the Avusa has formed a habit that it is finding very hard to break.

As noted previously, the danger with this approach of "managing" circulation is that it works as an opiate. Instead of dealing with emerging internal problems, and growing external challenges, one depends on the circulation department to keep sales figures up. Over time small problems, such as declining editorial standards or a loss of reader confidence, are allowed to grow into huge ones. At some point it becomes difficult or impossible to abandon artificial stimuli as the adjustment would be simply too wrenching.

Eventually though, once the advertisers have wised up, the only people you end up fooling are yourself. Thus, in Avusa's 2009 annual report the then Chairman of the company, Dumisa Ntsebeza, claimed that "... weekend newspapers appear to be holding their own [in terms of sales], with Avusa's Sunday Times being one of the few titles to maintain or increase circulation." The 2011 report makes the same complacent assertions.

All this raises the question of what the real paid circulation of the Sunday Times would be if all the mechanisms Avusa uses to "manage" it were purged from the system. Personally, if I were the boss of Capitau, I would like to know the answer to that question before I paid anything for the company. 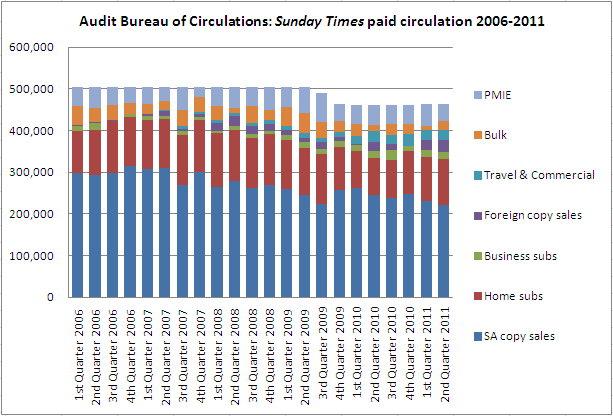 The ANC and the boers