Daily Sun (November 19 2014) - THE TROUBLE started with a giant rat that refused to die.

Then, Zanele told Daily Sun, vutha attacked the furniture in the house and taps flooded the floors . . .

NOW THEY HAVE A TOKOLOSHE THAT RUNS AROUND ON THE ROOF, LEAVING THEM TERRIFIED IN THEIR BEDS.

"The rat, the vutha, the floods and even a tokoloshe! We've had it all!" said Zanele Chamana (52), of Braamfischerville in Soweto.

"I've already spent more than R50 000 on sangomas and prophets but still we have no peace in our house."

Zanele said the trouble started some months ago when they found a giant rat in the house.

"We chased it around the house.

"It ran into all the corners of the rooms but then it escaped.

"When we woke up in the morning we found blood everywhere in the house."

She said her husband, Jerry Muronga (56) cleaned the blood but the very next day he got moered at work and later lost his job.

"The sangomas told us he had cleaned up human blood and that was what gave him bad luck," she said.

Zanele said she is afraid her family will be torn apart because the tokoloshe that runs around on the roof at night is making them fight.

"We fight for no reason and this has brought hatred among us."

Early this year, she brought a sangoma into her yard.

The sangoma dug a hole next to the front door and found the head of an animal like a goat or a sheep, and bottles of muthi.

The sangoma told her that someone had planted muthi to bring suffering into their lives.

She said her 21-year-old daughter, Phindile Chamana, has been the target of the evil in the house.

She said Phindile complains of bad things that have happened to her.

"My life has been hell," said Phindile.

"I see a man walking around in my room and he comes and stands at my bed. That's when I start sweating."

Zanele said they thought her daughter was lying.

"But recently my granddaughters from my other daughter were visiting and they cried and screamed all night without knowing what was happening," she said.

She said she doesn't know what to do.

"That's why I called Daily Sun to help me to get rid of this tokoloshe man and the evil that is destroying my house.

"I have to have peace or I'm going to go out of my mind!"

"Someone has sent a beast to them in the form of a rat and a tokoloshe. The family needs to see a strong sangoma to cleanse the house," he said. 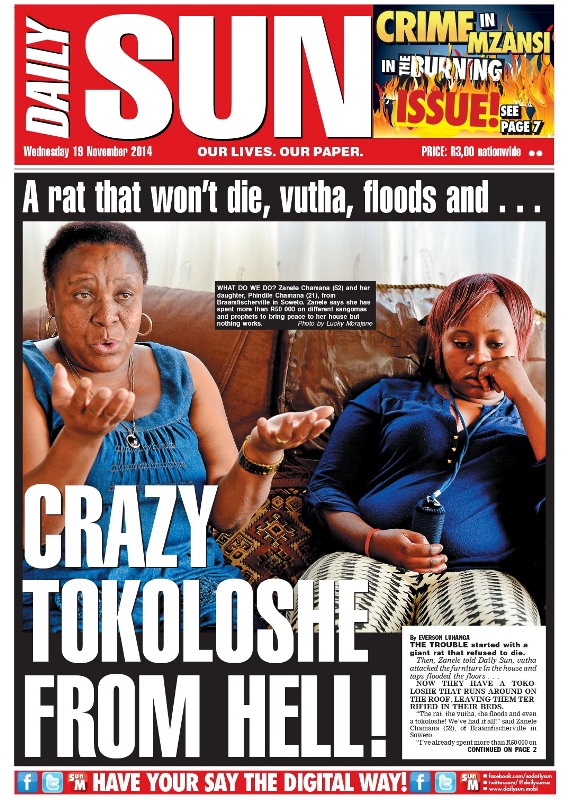 The Daily Insider: The festering sore that is PRASA seems to know no end