Daily Sun (November 17 2014) - THE road has a long history of serious and fatal crashes and many residents believe they know why.

They say it is because the spirits of murdered magoshas are still living in the bushes.

THEY POINT TO A SPOT NEXT TO THE ROAD AND SAY IT IS WHERE THE DEAD MAGOSHAS TAKE THEIR REVENGE.

The R50 Delmas road which passes Welbekend and Barcelona, Daveyton and Ekurhuleni has been the scene of many serious accidents, many of them fatal.

Captain Lucas Makuwa of the SAPS in Welbekend said: "Only last month there was an accident involving a truck, a taxi and a van when the vehicles caught fire," he said.

"The driver of the truck managed to jump out of the truck and he survived but the drivers of both the Toyota Quantum and the van were burnt beyond recognition."

He said in 2012 Steve Mabona, a former Mpumalanga MEC, died on the road when his car overturned.

Makuwa agreed that there seemed to be more accidents on this road than the other main roads in the area and many residents believe they know why.

They say it is the place where truck drivers used to stop to rest and be serviced by magoshas. But evil thugs targeted the magoshas and killed them in the dense bush near the road.

Residents believe the spirits of these magoshas are causing the accidents.

A resident, Velaphi Nkuna, said at least four bodies of magoshas have been found at the spot.

"Their families don't come to collect their spirits and that is why that road is haunted," he said.

Another resident, Joyce Chuma, said they must pray for the road. "There can't be so many people dying here every week," she said.

When the SunTeam went into the bushes they found the remains of what looked like a crime scene. Old police tape ringed the place in the bushes where a magosha was allegedly murdered. Red candles were still in the grass with a razor placed on top of a candle with sewing needles and an empty brandy bottle.

Not far away was a white cross to indicate where a fatal accident took place.

Makuwa confirmed that magoshas had been killed at the place but could not say how many magoshas' bodies had been found.

While Daily Sun was talking to Makuwa at the Welbekend Police Station, another accident happened on the road. The SunTeam went to the scene but luckily nobody had died. The owner of the damaged car didn't want to speak to Daily Sunas she was still too traumatised.

Sangoma Dumezweni Mahabuke said the candles, needles and razor could be related to Satanism. He said a ritual needs to be performed to cleanse the road.

"A ritual will take their spirits away so they stop harassing
motorists," he said. 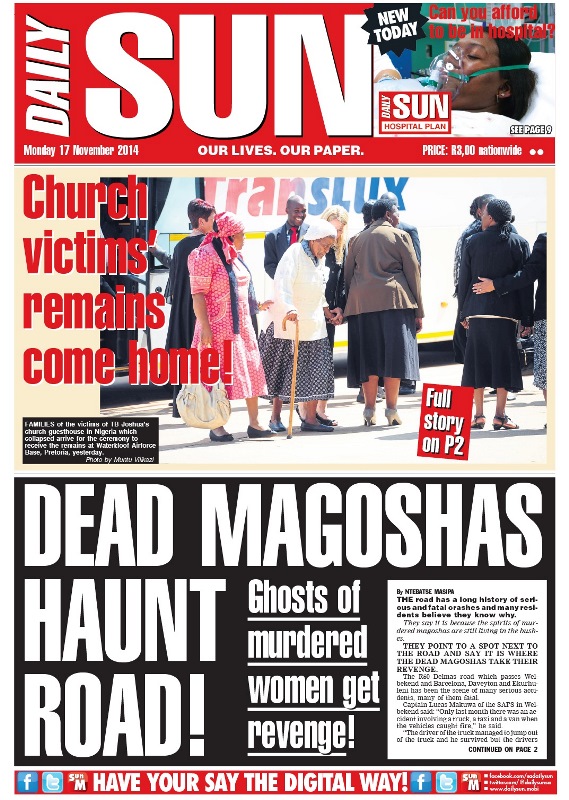