"They knocked me down and trampled my child while running from the cops" - front page lead, January 26 2015

Daily Sun (January 26 2015) -  ZANELE said her whole life changed on Friday when she was knocked down by looters running from the cops.

As she lay on the ground people ran over her. She was injured, and her one-month-old child was trampled to death.

MY BOY HAS LEFT ME TOO SOON. HE HAS LEFT A BIG HOLE IN MY HEART, SHE SAID.

Tearful Zanele Majozi (19) from Kagiso extension 2, west of Joburg said she was on her way back from the clinic after being treated for a rash.

"I went to my friend's place, but before I got there, I heard people screaming and police shooting and a group of people came running towards me," she said.

"I was terrified. I was worried me and my baby would be shot by the police who were chasing the crowd."

But Zanele struggled to run with the baby on her back.

"People bumped me and I fell to the ground. About five people stepped on us."

"As the group left us behind, my friend came and helped me up. My son was bleeding from the nose and mouth."

She said her friend, Portia Kwatsha (37), rushed the baby to the clinic.

"I was limping. I followed Portia to the clinic but my child was already dead."

Zanele said her body is still sore but she is more hurt by the death of her son.

"My life will never be the same again."

Zanele's mum, Beauty Majozi (68) said she was at home when a neighbour came running to tell her that Zanele and her son were injured after being caught in the middle of the violence.

"I rushed to the clinic. When I arrived, nurses told me that my grandson was dead," she said.

Beauty said she was angry with people who were spreading rumours that her daughter was part of the people looting.

"Zanele was at home and only left the house when she went to the clinic. She was not one of the looters," said Beauty.

Portia said it was very sad that a child should die in such a terrible way.

"What happened is unacceptable. This shouldn't happen in our community."

National police spokesman General Solomon Makgale said a murder case was opened at Kagiso Police Station and that police were investigating. No one has been arrested yet. 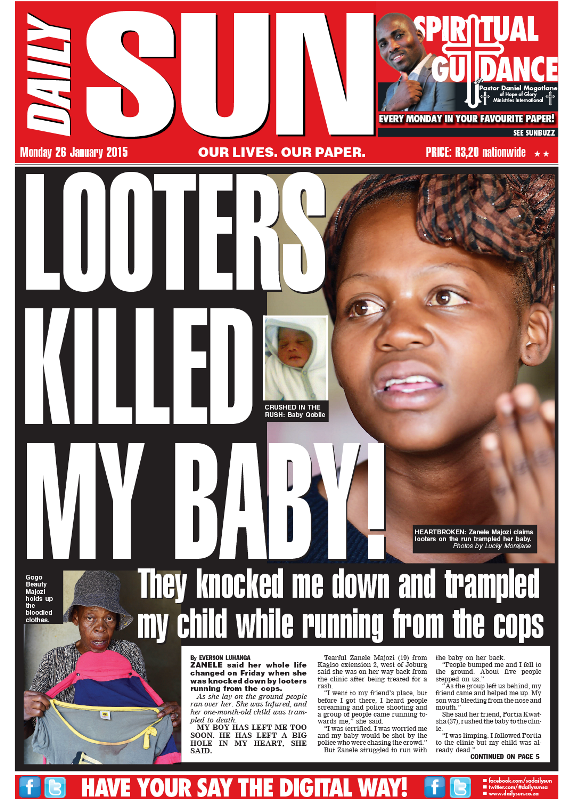 Shiba Inu, Dogecoin and other cryptos to avoid