{{testingGreg}}=testingGreg
"My daughter is alive! Zodwa died two weeks ago. But her mother doesn`t believe it" - Daily Sun - iSERVICE | Politicsweb

"My daughter is alive! Zodwa died two weeks ago. But her mother doesn't believe it" - Daily Sun

Daily Sun (June 19 2013) - FOR two weeks the body of Zodwa Shange has been lying in a mortuary. But the family has TWICE postponed the funeral of their loved one . . . BECAUSE THEY BELIEVE ZODWA IS STILL ALIVE!

Both her mother, Sibongile Shange (56) and Zodwa's fiancee, Denver Palmer, are convinced Zodwa is not dead but being kept somewhere by a tokoloshe. "We live in hope that we will receive a call from the mortuary saying she has woken up," Denver (25) told Daily Sun. "All the traditional healers we have gone to assured us that Zodwa is alive and we believe them."

The family's torment began on Monday two weeks ago when 25-year-old Zodwa came home to their flat in central Durban after having forgotten her food in her workplace bathroom at Ethekwini Municipality's electricity department.

Said her mum: "She said she had called a friend at work to bring her food home for her. "But the friend said she had found the food hidden behind a toilet seat - not on the basin where Zodwa had left it. "Zodwa gave it to me but I didn't eat it," said Sibongile.

"But Zodwa took the bottle of mineral water that had been with the food and drank it. "The next thing she came flying out of the bathroom as if something had pushed her.  "She hit the wall with her face and collapsed," said the mother.

"Water oozed out of her mouth. I suspect there was something wrong with that water. "We called the paramedics but they pronounced her dead and took her away. "We stayed up until morning hoping she would come back, but she didn't," said Sibongile. "I went to sangomas and they all said she was hit by a tokoloshe, which explains the way she fell."

Denver told Daily Sun: "This is all strange to us. She was fine until she drank that water. We just don't believe it is a coincidence that her food and water went missing. "Somebody performed an evil deed on her!" As a result, the family has postponed Zodwa's funeral twice - and her memorial service was also cancelled last week because the family believe it is "unnecessary". "We are praying and waiting for that call from the mortuary," said Denver.... 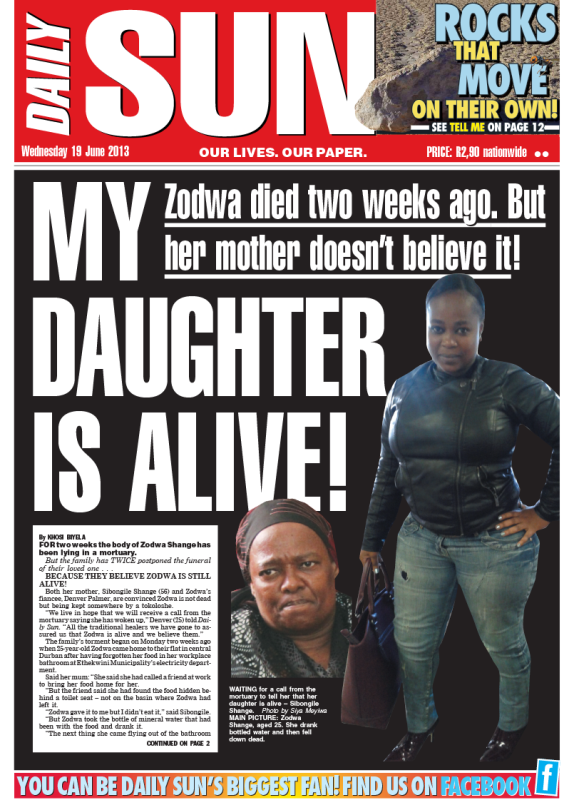 "Booze on the job! Municipal workers take time off to drink" - Daily Sun