"My four days of rape hell! Teen tries to kill herself after kidnap terror" - Daily Sun

The lead story and front page of SA's largest daily newspaper, May 22 2013

Daily Sun (May 22 2013) - A WEEK AGO she was an innocent virgin in Matric, looking forward to a successful future. But now she has tried to kill herself after four days of being held captive, doped and repeatedly raped by three young thugs. "THEY TOOK MY INNOCENCE," SHE CRIED TO DAILY SUN. "I HATE WHAT THEY DID TO ME!"

The pretty 18-year-old from Etwatwa, Ekurhuleni, spoke out about her ordeal that began last Tuesday. She said she was seized by two dropouts outside her school, who robbed her of her cellphone and R50. "They pointed a gun at me and stopped a taxi, put me inside and said if I screamed I would be shot."

The taxi took her and the two gangsters to a shack in Chris Hani squatter camp, Etwatwa, where they locked the door and started smoking nyaope. "I sat there and cried. One of the guys pointed a gun at the back of my head and said I must stop. He said I was not going to leave before he got what he wanted," she said.

She said the thug undressedher and the two took turns at raping her without a condom. It went on the whole night! Then she was "passed around" to the house of a third thug who was a friend of the first two. "This guy also raped me over and over again," she cried. "He made me smoke nyaope. He asked me if I knew the Wrong Turns Gang and I said no. He told me they killed people," she said.

The thug threatened her and said if she got him arrested his friends would kill her. She said he raped her with his parents in the house - and his mother never said or did anything. "I was locked in the house and his mother didn't even bother to help me. Instead she made sure the doors were locked and I had no way out.

"I was hurt, I thought she would help me because she is a woman," cried the girl. Meanwhile, the girl's family and friends began a massive search for her. Then four days later, on Friday afternoon, her 27-year-old brother got a tip-off from a unknown person. Her brother said: "They told me to go to one of the shacks in the area. We went there and found a man. Residents beat him up until he led us to his friend."

"When we got there the community surrounded the house and I knocked. "Angry residents got into the house and my sister was there, crying and still in her school uniform," he said. The girl was rescued and taken to hospital. But that night she tried to end her life by taking pills. She was only discharged from the hospital late on Monday.

"All I wanted was for my life to end," she told Daily Sun. "I was a virgin and dreamed about finishing school and becoming a sucess in life before even thinking about a man. "Now my innocence is gone!" she cried. Etwatwa cop spokesman Colonel Melatelo Maoto confirmed that cases of rape and kidnapping were opened and two suspects were arrested. 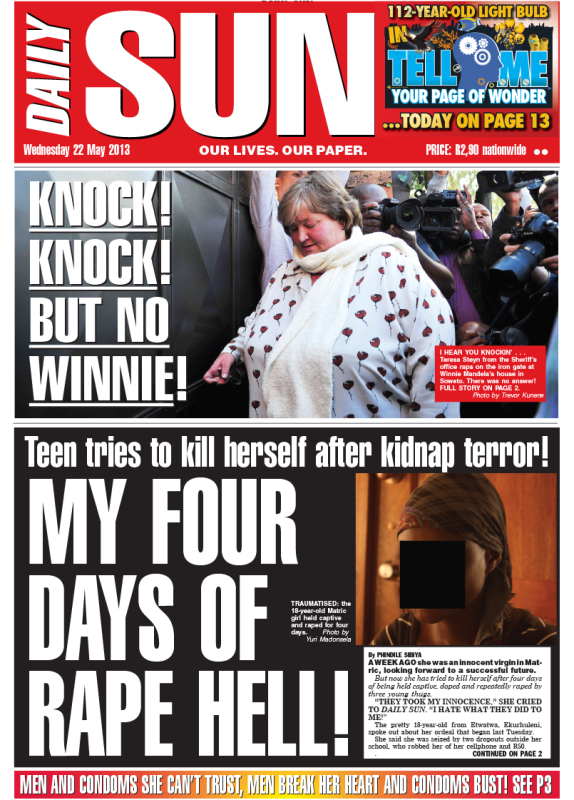 "Brother kills brothers! They fought over land and cattle, but only got death in the end" - Daily Sun

Will SA’s future be bleak or prosperous?

The Daily Insider: Why Buffett calls compounding the Eighth Wonder of the World

MAILBOX: Emissions, diesel and electric vehicles in SA – it’s not as simple as you think

What does 2022 hold for South Africa? – Jonathan Katzenellenbogen