"One hit four years ago and this is what happened to Martha!" - front page lead, November 18 2014

Daily Sun (November 18 2014) - TO THIS day, the couple don't know what came over James when he hit Martha on her forehead with his fist.

She soon had a slight bruise on her face, which became a bump that never stopped growing.

NOW MARTHA LIVES WITH A GROWTH THE SIZE OF A SMALL FOOTBALL ON HER FACE!

"I really don't know what came over my husband that day in 2010. We never argued.

She said she and her husband, James Nyathela (46) were sitting in their home in Kaalpan, near Sannieshof, North West when he suddenly punched her.

James said he was just as shocked as his wife.

"I don't know what happened. Before I knew what had happened I had hit my wife," he said.

Days later the bump became a small sore until it became a huge ball that almost covers her eyes and nose.

Martha lives a life of pain.

The growth pulls the skin tightly over her head and she has problems breathing. She can only use one nostril and she can only see through one eye.

When the growth first started developing the couple consulted a sangoma.

"The sangoma told us people didn't like to see us happy and had cast an evil spell over my husband so that he would do this to me," said Martha.

"Another sangoma said my husband's ancestors are angry because they want him to follow his culture and become a sangoma."

James said he doesn't want to become a sangoma.

The couple tell a terrible story of bad treatment by the hospital system. They said they went to Gelukspan Hospital where they were told Martha would be treated at Mahikeng Hospital. But she was sent back home instead.

When she was finally taken to Mahikeng a few months ago she was told she would be transferred to Chris Hani Baragwanath Hospital in Soweto.

They were on the way to Baragwanath in an ambulance when they got a message to return to Gelukspan.

"There they removed the drips that had been put up, and stripped off the wrist bands. They only left this one," said Martha, showing the SunTeam a yellow band with her name on it on her wrist.

"When I finally get to go for an operation I want a sangoma to be present to perform traditional rituals. If this doesn't happen I am going to die and I don't want to die now," she pleaded. North West Health spokesman, Tebogo Lekgwethwane, said he had referred our questions to the various hospitals. 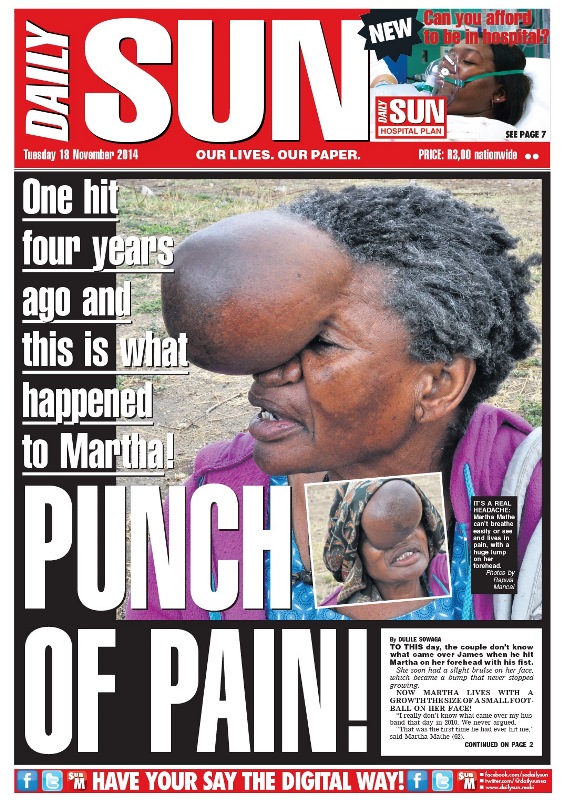