Daily Sun (July 29 2013) - NEIGHBOURS heard the terrible cries of a woman in a life and death struggle . . . Through the broken window, they saw the attacker sucking the blood of the dead woman and biting her flesh.

LATER, THE MURDEROUS RAMPAGE ENDED WHEN THE WOMAN'S OWN SON WAS REMOVED FROM THE BLOOD-SOAKED ROOM!

The 19-year-old teenager came home at about 3am on Saturday morning. It appears that when his mother, Zanele Mayisa (44), opened the door, a fight started. The young man was allegedly armed with a screwdriver and he stabbed her repeatedly.

His father tried to help but the possessed teenager overpowered him and hit him with a sharp object. When the father and the boy's 87-year-old gogo ran out of the house looking for help, the teenager locked the door. Neighbours who came broke the bedroom window.

"We threw rocks at him because we wanted him to stop sucking her blood but instead he just roared like a lion." A neighbour who didn't want to be identified told Daily Sun they saw the man sucking the woman's blood and eating her flesh.

"First he ripped her ear off, then moved to her neck and forehead," said the neighbour. The police were called to the scene and they managed to pull the boy off his dead mother's body but they could not stop the neighbours from assaulting him.

He said the teenager had killed his mother and neighbours had assaulted him. Dlamini said: "There are allegations he was drinking blood from his mother's wounds. He is under guard at the hospital and will be charged with murder." The police are still investigating. 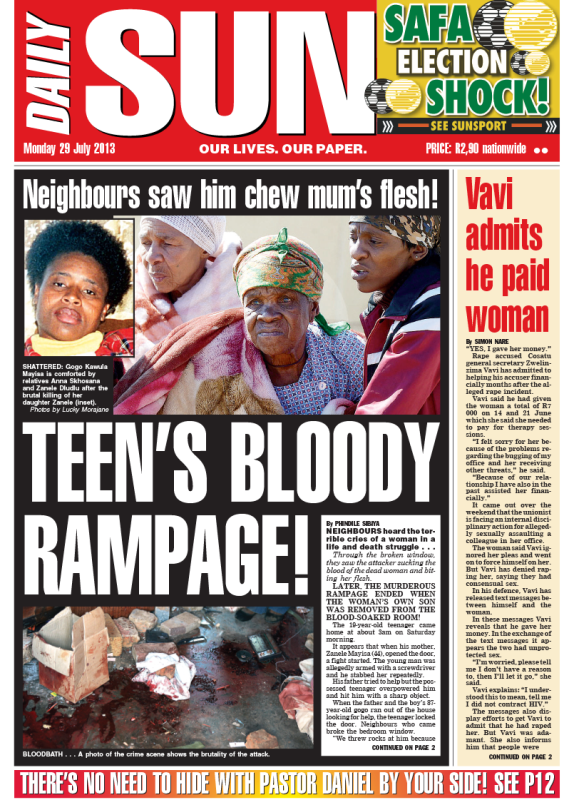 Prof Aldous on the negative mainstream narrative around Ivermectin