A gripping account of the last years of the PW Botha regime, and the formation of the DP

The Story Many People Have Been Waiting For

Some human events simply don’t tire with time, and what Denis Worrall did a couple of decades ago has a deep relevance for our own times. This is the story of his political career and, above all, of his momentous decision to resign as South African ambassador in London and return home to the rough-and-tumble of politics.

Back in the country he took on, individually and independently, an arrogant Nationalist government in the Helderberg constituency, which most experts regarded as unwin­nable. But Denis lost it by a mere 39 votes out of over 18,000 cast, in a contest that attracted worldwide interest. As one international journalist put it: “Today Whitehall, Washington and Bonn are no longer looking to Pretoria but to Helderberg for signs of movement and hope.” And this Denis gave them by bringing together his Independent Party with the Progressive Federal Party to establish the Democratic Party, of which he was one of the leaders, so ending “white only” politics. As the Sunday Times said: “Watershed! For the first time in decades there is a feeling the old order in white poli­tics is nearing its end.” This didn't just happen. It took courage, vision, determination and immense risk. 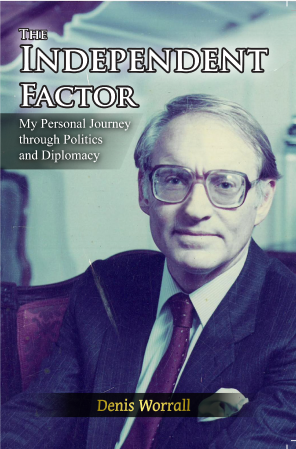 Now for the first time, The Independent Factor, Denis’ memoir, tells this story from the inside in exciting and intimate detail. He offers his views on the crisis in our politics today and the challenge facing Cyril Ramaphosa and suggests what the DA can do to help him.

This is an important read for South Africans and interested people worldwide. As Lord Charles Powell, Margaret Thatcher’s foreign affairs secretary, says: “Brilliantly written, The Independent Factor gives a penetrating view of UK–South African re­lations at the height of apartheid.” And as Bennie Rabinowitz, a leading member of the Cape Town business community, comments: “Denis has a story to tell – including the establishment of the Democratic Party, his international experience of leaders like Margaret Thatcher and Geoffrey Howe and, back home, Colin Eglin, FW de Klerk, Nelson Mandela and others. I found it gripping. A highly recommended read.”

Other reviews of The Independent Factor:

"This is no exaggeration. Worrall was a vital component in the breaking of South Africa's political logjam. The book is a fascinating personal account. Rich and absorbing, it is of interest to anyone wishing to understand the South African "miracle".” - Milton Shain, Emeritus Professsor of Historical Studies at UCT.

"This book is appropriately titled. In everything that he did, Worrall chartered and followed his own independent course – whether breaking ranks with his academic colleagues by joining the National Party; or streaking ahead of the NP in advocating political rights for all South Africans; or as an ambassador in wrestling with the obduracy of his own government – and finally as a politician in leading the way to uniting the fragmented opposition into the Democratic Party. In all this he was often a trailblazer – but, one suspects, seldom a comfortable partner or an easy team player. His greatest contribution was probably his role in helping to establish the Democratic Party. In its first election in 1989 it received the support of 21% of the white electorate.” - Dave Steward, a former South African ambassador and FW de Klerk Foundation chairman.

"Denis Worrall’s memoir deals with his personal journey through politics and diplomacy and readers will find it difficult to put down. Strongly recommended.” - Peter Soal, former PFP member of Parliament.

"As this book shows, Worrall made his mark in the struggle of the mind. This ultimately helped lead to greater enlightenment in the cause of averting a full-scale civil war. Working broadly in his own pool, at first rather cautiously, influencing mainly white opinion but later showing bursts of some real courage, he was to play a role in a country lurching to democracy in 1994." - Tony Heard, former editor of the Cape Times.

The Independent Factor can be ordered online at the following outlets:

It is also available in all good bookshops.