Daily Sun (September 19 2014) - It's the biggest game in recent history. Both sides are on form, scoring goals early in the season.

I like both Majoro and Erasmus in Pirates attack. - Helman Mkhalele Prediction: Pirates 3 - 2 Chiefs

I fancy Chiefs because they are on form in front of goals and have a better record in cup finals. Pirates have played in four recent finals and only won one. - Fani Madida Prediction: Chiefs 2 - 1 Pirates

Madida believes Chiefs will win, and the Express believes the Bucs will be victorious. But they agree on one thing . . .

THERE WILL BE MANY GOALS!

Orlando Pirates faces Kaizer Chiefs in what many describe as the game of the year.

Madida is the only South African player to score 34 goals in a season (1991) when he and Shane MacGregor formed the deadliest partnership in domestic soccer history.

Madida believes there will be plenty of goals in this final: "I see at least three goals and two of them will go to Chiefs," he said.

"I fancy Chiefs because they are on form in front of goals and have a better record in cup finals. Pirates have played in four recent finals and only won one. They have plenty of experience of finishing in second place and that is where I see them on Saturday."

Madida said he hoped coach Stuart Baxter would not use midfielder Siphiwe "Shabba" Tshabalala and striker Bernard Parker, who returned from injury and struggled in last weekend's 2-1 win over AmaTuks in the league.

"It will be inviting trouble if Shabba and Parker play in the final," said straight-talking Madida.

Former Bucs flying winger Mkhalele, a member of the victorious Pirates side that won the Africa Champions Cup in 1995, said he expected to see at least four or five goals, with Pirates winning by a single goal: "I see the game ending 3-2."

He agreed with Madida on one point: "Yeye is on fire. He is scoring goals from the midfield and has had a brilliant start to the season. He is dangerous."

Madida reckons the dangermen for Pirates are strikers Kermit Erasmus and Lehlohonolo Majoro.

But Mkhalele, like Madiba a former Bafana Bafana star, said: "It's the biggest game in recent history. Both sides are on form, scoring goals early in the season. I like both Majoro and Erasmus in the Pirates attack."

He said all the players have a duty to provide an exciting Soweto derby.

"When both Pirates and Chiefs are on form it helps Bafana get players and it inspires the youth, who look up to these players as role models," he said.

"One thing is for sure: the country will come to a standstill on Saturday night." 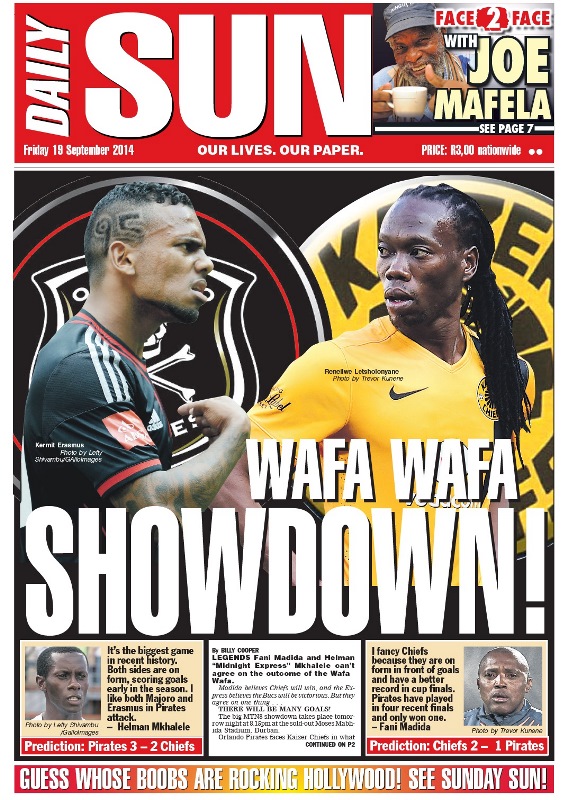