A hatred for the cruel and murderous

Johannesburg - and South Africa - are "small places", as they say. Most people in the writing business know each other or at least have encountered one another, especially if they're more than say 40 years old. A second trite truism is that it's difficult for most people to be nasty about folk they know.

All of which is to say that many book reviews should begin with a caveat: e.g., I know this oke or okette so that's maybe why I am being pleasant about his/her turgid novel (or whatever).

Now I do know David Beresford. He whacked (for a proverbial six) "my" (I was the ghost writer) book about erstwhile Vlakplaas commander, Eugene de Kock (A Long Night's Damage, 1998) and he was not especially complimentary about my Zuma biography (2008). In short, I have no need whatsoever to be "nice" to or about Beresford ...

Beresford: born in Seffrica, moved to the UK in 1974 where he joined The Guardian, covered conflicts in Ireland, Sri Lanka, Pakistan and the first Gulf War. In 1984, he came back to Seffrica where, ever since, unless you are only quasi-literate or extremely young, you have encountered his journalism in the Mail&Guardian (and its forerunner) and of course in The Guardian and The Observer.

In 1986, his book on the Irish hunger strike, 10 Men Dead, was published - and The Observer observed that it was "probably the best book to come out of the Irish troubles in 20 years".

In 1991, however, when (if my calculations are correct) he was 44, Beresford developed symptoms of "the shaking palsy", Parkinson's disease. He went to France to have a special operation on his brain, which was carried out without anaesthetic while he was bolted into a special helmet.

Presumably the operation was as "successful" as it could be. But nowadays Beresford does have trouble talking; there is sometimes a lapse between his thoughts and the articulation of those thoughts.

This, as well as his generally unkempt appearance (he does have a startling resemblance to a prototypical Samuel Beckett character), does put one in mind of a line from a poem ("Revolution") by Israeli poet Dennis Silk: "Here is a shambling and sleepy and thoughtful one".

This in turn tends to make one take Beresford at his word when he says that his new book - Truth Is a Strange Fruit: a Personal Journey through the Apartheid War (Jacana, R185) - is "a little bit odd".

Don't be fooled: by Beresford or by whatever else you might hear.

This book is indeed light years away from being an "orthodox" study of the years that the truth commission looked at - 1960-1994, the years Beresford calls the years of the Apartheid war.

But it is a stunning, frightening, and moving "collage, or montage of what might be described as curiosities, ruminations, observations, anecdotes, snatches of remembered dialogue, letters, and stories" that emanate from those years.

Beresford has taken a number of strands - some key stories from the TRC, his own life, his Parkinson's, the deaths in ANC detention (or soon after his release) of Thami Zulu and the killing of Benjamin Langa, and - above all - the remarkable correspondence (not previously published) of so-called station bomber John Harris, hanged on 1 April 1965, and his wife Ann, and woven them all together into a stunning memoir and philosophical rumination.

Both Ann Harris and the Harris's son David - an infant when his father was executed, and now a QC in London - were at the launch on Tuesday night at the Institute for the Advancement of Journalism, and David Harris (or rather Wolfe - his mother re-married) made a moving speech about his father and the all-too-often forgotten ARM (African Resistance Movement).

The hanging of Harris and the correspondence between John and Ann are of course a major part of the book. The correspondence is, as I have said, remarkable and moving. And the book is worth reading if only for its treatment of the Harris story - and those letters.

But equally as moving, although "shattering" would be a much better word, is one of the ultimate sections of the book (and there are many others equally as powerful) in which Beresford unflinchingly recreates Harris's interrogation by (then) Captain JJ Viktor, a savage security policeman.

I mention this "scene" in particular because for me it demonstrated two things. The first is that Beresford is simply a brilliant writer. I think that in his genre (journalism/non-fiction - though there are some "imagined" conversations in this book) he is one of the finest that we have - up there, in my view, with our best wordsmiths: Peter Wilhelm, Rian Malan, Mark Gevisser.

The second is that, despite the "shambling and sleepy and thoughtful" aspect, there is an undying passion that burns in Beresford - a hatred for those who are cruel and murderous - and you can feel its heat throughout this book.

The "Strange Fruit" of the book's title comes from the Billie Holiday song:

Southern trees bear strange fruit,
Blood on the leaves and blood on the root,
Black bodies swinging in the southern breeze,
Strange fruit hanging from the poplar trees.

This is one of the touchstones of the book as are some lines of poetry written by Beresford:

Butterfly moments, she said.
So they are.
We try to pin them down with words,
like the gorgeous creatures in still ranks
on the pages of lepidopterists' trays.
There is a desperation about it,
as if by chloroforming the moments
with memory
we can keep what has been
and hold back the march
to mortality.

This book is an attempt by an intelligent, edgy man - who has had to deal with "the fear of paralysis, fear of unemployment, fear of loneliness, fear of death" - and has tried to make sense, or at least has asked questions, about the horror that enveloped this country for 34 years.

In other words, Truth is a Strange Fruit is so much more than a mere history book. Beresford has somehow contrived to weave the days he lived through as a journalist and his humanity together - and to make this strange and bitter fruit really bloom. 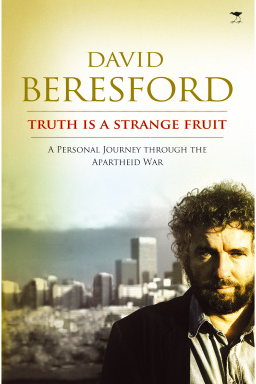 The Media Tribunal: Who should go to jail?

Zuma covers himself in glory

The ANC loses its mind