In a Facebook post on Thursday Ntokozo Qwabe - a co-founder of the Rhodes Must Fall movement at Oxford University - gleefully recounted how he and his group had reduced a waitress to tears at Obz Café in Observatory Cape Town. He then launched into a racial diatribe against South Africa’s minority white population saying they must not be allowed to rest – or get any tips apparently - until they have given the land back.

Qwabe, who was elected a Rhodes Scholar in 2014, has previously described Cecil John Rhodes as a “racist, genocidal maniac” who was “as bad as Hitler.”

LOL wow unable to stop smiling because something so black, wonderful & LIT just happened! And of course, the catalyst was a radical non-binary trans black activist - Wandile Dlamini - from the Rhodes Must Fall movement. Because trans activists have BEEN the ultimate blessers of this decolonial struggle!

To cut the long story short, we are out at Obz Cafe with the said activist, and the time for the bill comes. Our waitress is a white woman. I ask the said activist what the going rate for tips/gratuity is in these shores. They look at me very reluctantly and they say 'give me the slip, I'll sort that out'. I give them the slip.

They take a pen & slip in a note where the gratuity/tip amount is supposed to be entered. The note reads in bold: "WE WILL GIVE TIP WHEN YOU RETURN THE LAND". The waitress comes to us with a card machine for the bill to be sorted out. She sees the note & starts shaking. She leaves us & bursts into typical white tears (like why are you crying when all we've done is make a kind request? lol!). Anyways, so this white woman goes to her colleagues who are furious. She exits to cry at the back & a white male colleague of hers reluctantly comes out to address us & to annoy us more with his own white tears telling us that he finds our act "racist".

We then start breaking it down for this white man & ask him why they are catching feelings when we haven't even started (like the part where we take up arms hasn't even come & yall are already out here drowning us in your white tears? Really white people? Wow.). We start drawing him to the political nature of the act & why we couldn't be bothered that they decided to catch feelings from the note. We tell him it's great that business as usual has stopped & the pressing issue of land is now on the agenda in that space - seeing the cowntry was celebrating 'Freedom Day' yesterday. We then chase him back to do his job. And continue with our conversation before exiting the café.

Moral of the story: the time has come when no white person will be absolved. We are tired of "not all white people" and all other bullshit. We are here, and we want the stolen land back. No white person will be out here living their best life while we are out here being a landless and dispossessed black mass. NO white person shall rest. It is irrelevant whether you personally have land/wealth or you don't. Go to your fellow white people & mobilise for them to give us the land back. That will be the starting point of all our interactions from now. We will agitate all our spaces with the big question: WHERE IS THE LAND?

Thank you to all the non binary, trans & all other black bodies who have been at the helm of this decolonial moment in the settler colony known as South Afrika. NOTHING will ever be the same again. Alibuye Izwe Lethu!

In response to the early press reporting on his earlie post Qwabe commented on Facebook on Friday:

I hear the white media is going hysterical because a white woman decided to cry over a harmless political statement made in one line on a piece of paper?

LOL! Because one moment of white tears always makes news despite the everyday unarticulated black pain the dispossessed & landless masses of this cowntry have to live through!

In his last will and testament Cecil John Rhodes directed that the students elected to the scholarships he was endowing “shall not be merely bookworms.” He stated that regard should also be had to “his literary and scholastic attainments”; “his fondness of and success in many outdoor sports such as cricket football and the like”, “his qualities of manhood truth courage devotion to duty sympathy for the protection of the weak kindliness unselfishness and fellowship”; and, “his exhibition during school days of moral force of character and of instincts to lead and to take an interest in his schoolmates for those latter attributes will be likely in after-life to guide him to esteem the performance of public duty as his highest aim.”

Rhodes also directed that “no student be qualified or disqualified for election a Scholarship on account of his race or religious opinions.”

It is not clear to what extent the Rhodes Trust in South Africa continues to adhere to these directions – if at all - in assessing the applicants for its scholarships.

The sad decline of the Rhodes Scholarship 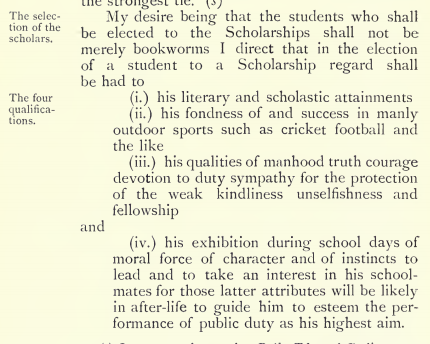 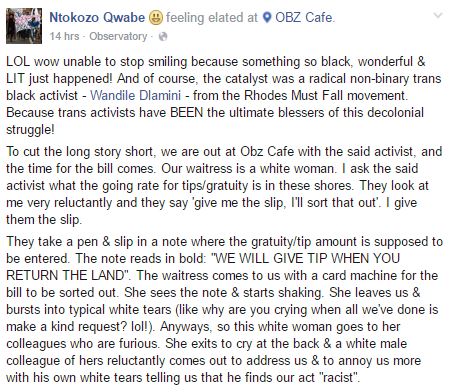 We will remove Rhodes plaque if we can - Oriel College