The civil rights organisation AfriForum today announced that its Anti-Corruption Unit, as well as its Private Prosecution Unit, headed by Adv. Gerrie Nel, will be taking on the case of the Ndebele Vaaltyn Tribe who in 2014 brought criminal charges against Canadian mining company Ivanplats Mines Ltd., owned by billionaire and mining magnate Robert Friedland. The criminal complaints relate to illegal mining operations, contravention of environmental legislation and the unlawful and seemingly culturally disrespectful relocation of the tribes’ historical and ancestral graves. An inspection in loco was today carried out at the concerned areas – including the operational area – as part of the verification of the complaints.

“AfriForum was approached in March 2017 by members of the tribe because they perceive that Ivanplats may have enjoyed unjustified protection by government officials. We are considering a private prosecution to ensure equality before the law and that the rule of law prevails,” says Adv. Gerrie Nel, Head of AfriForum’s Private Prosecution Unit.

The mining company has also relocated members of the tribe from its tribal homestead to make way for a new storm water drain. AfriForum has been informed that an investigation by the Public Protector’s Limpopo Office found that Ivanplats had not launched an application for permission to include the storm water drain in its mine layout plan.

“The Kekana Royal Family is opposed to the relocation of graves and the relocation of residents without due processes being followed. This entails that Ivanplats must contact the Department of Rural Development and Land Reform (DRDLR) to initiate a process of obtaining tribal resolution and ministerial consent. The family is further concerned that Ivanplats disregards complaints by members of the tribe regarding illegal blasting activities. The allegations involve that the activities are conducted within 500 m from the community, resulting in structural damage to houses and disturbances of the peace as blasting is frequently conducted at night,” says Aubrey Langa, Community Representative and member of the Ndebele Vaaltyn Tribe.

The tribe also filed a complaint with the Public Protector in April 2014. According to the representatives of the tribal community, this complaint has not received proper attention. It is enigmatic why the Hawks did not request the Department of Mineral Resources (DMR) to accompany the elite law enforcement agency for site inspection conducted in December 2017. Representatives of the Ndebele Vaaltyn Tribe expressed their discontent that Minister Zwane – who visited the concerned area in May 2017 – failed to act against the ongoing illegal mining operations.

“It is one of AfriForum’s core values to promote and uphold mutual respect and recognition between communities. The Private Prosecution Unit, in line with its declaration to address selective prosecutions and those people or institutions that are sheltered from prosecution, had no hesitation to take steps to ensure that the Ndebele Vaaltyn Tribe is not treated unjustly by a failure to address the alleged unlawful actions,” concludes Nel. 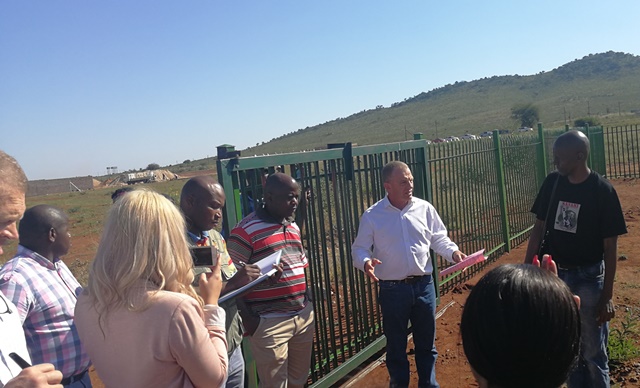