ANC: Billboard blunder 'minor', removing it will 'kill campaign of the opposition'

The ANC has described a spelling error on one of its billboards in Nelson Mandela Bay as mere "human error" on the part of one of its service providers.

The error will not "derail" the party and the immediate removal of the billboard will "kill the campaign of the opposition," the party's regional task team said on Tuesday.

In response to the buzz generated by the discussion on social media, the ANC released a statement that contained spelling errors of its own. In it, the party said it "notes with concern, a billboard containing a misspelling of ANC President Cyril Ramaphosa encouraging people to vote for the ANC".

"The ANC makes use of service providers to put up it's (sic) billboards and have (sic) noted with concern that the service provider has put one up containing spelling errors."

It continues that the ANC has "also noted that this error has been used by opposition in an attempt to discredit the work of the ANC. This, to us, is a sign that opposition parties do not have anything to offer voters as we approach the May 8 general election and as such, they have resorted to focusing their campaigns on minor errors attributed to the ANC."

The ANC "will not allow a human error that was made by a service provider to derail us" and "we will continue to work hard and make strides in gunnering (sic) support for the ANC towards the general election as we have been doing," reads the statement.

"We consider this a very minor and insignificant setback to our campaign and will ensure the immediate removal of the billboard, which will, in turn, kill the campaign of the opposition."

News24 previously reported that embarrassing gaffes and displays such as these were not uncommon.

In 2018, the ANC had trouble with caterers for its 108th birthday celebration, with the spelling and presentation of its celebratory cakes, leaving much to be desired. 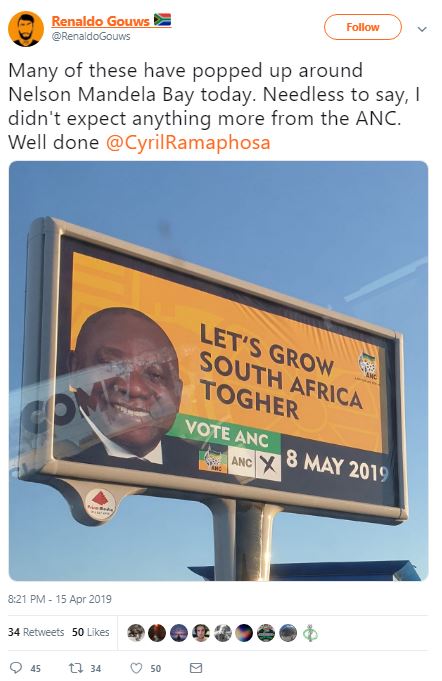 SLR: #WhitesMustPay and what it means for future generations