ANC veteran Barbara Hogan has told the South Gauteng High Court in Johannesburg how she wishes she had never compiled a report that included a list of "close comrades" on it.

Aggett, who was a medical doctor and trade unionist lobbying for the rights of labourers, died while in detention at the infamous John Vorster Square police station in Johannesburg in 1982. He was found hanging in his cell 70 days into his detention, News24 previously reported.

The first inquest in 1982, found he had committed suicide at the police station now known as Central Johannesburg police station.

Last week, while giving testimony during a new inquest into Aggett's death, his former partner, Dr Elizabeth Floyd, said the activist might have been targeted after Hogan compiled a report known to be the "Close comrades report".

Testifying at the inquest, Hogan detailed how she had given her compiled report to Rob Adam and how he had told her to also include a list of names because there were concerns over the safety of the people she worked with. The report would be sent to Mozambique.

TimesLive reported Hogan had believed the Security Branch had intercepted a mailbox she had opened in Illovo, Johannesburg, to interact with ANC members in Botswana, which had resulted in her approaching Adam who was a contact in Umkhonto weSizwe.

Hogan detailed how she had ended up being asked to compile the report, saying when she had queried whether the report would be encoded she was told it would be out of the country within a matter of hours and it was urgently needed because there were concerns over safety.

She added after handing over the document to Adam, he advised her to continue with her political work to avoid tipping off the people who were watching her that she was aware she was under surveillance.

"I was under pressure to just produce a report quickly. I myself, am still worried about it and it's still something I wish I had never ever written because of the consequences that it had not only for Neil but for everybody. And all the suffering that people went through, a lot of that was attributed to this report," Hogan told the court.

Hogan said she wrote the report and had also sent through the list of names because she was concerned about the security of people. She noted she had faced a dilemma - protect the identity of the activists or write the report.

The list then ended up in the hands of the Security Branch.

A copy of the report, titled "Close comrades", was handed to the court as an exhibit.

The former minister also detailed to the court how she categorised the names in her report, outlining the first three names mentioned in the report, which included Gavin Anderson and Aurett van Heerden, and why she mentioned them.

Hogan told the court of how she would meet regularly with the people she listed, although they had different networks and different influences.

She said the names that she listed were individuals who were committed to the ANC and part of the core primary group people she engaged with.

"Only I was linked to the Botswana network and I, honestly even to this day, don't know which ANC networks either Gavin or Aurett related to…

"I never knew who their networks were. I put them first because if anybody was going to be in danger, these were the three that I met with most regularly. And if I had been under surveillance, they would be most affected," the former minister testified.

In her report, Hogan said she had also added Alan Fine who was in a different category on the list.

She added she and Fine were close friends of anti-apartheid activists Jeanette and Marius Schoon.

During her hours-long testimony, Hogan told the court she "knew for sure" Aggett was not an ANC member because he had told her he would join it.

While testifying at the inquest, Floyd detailed how, when she saw Aggett's body after he died, "there were no marks of any kind on his neck" and no swelling either. She told the court Aggett had been positioned in a strange way with his chin higher than his nose, News24 reported.

A copy of the document: 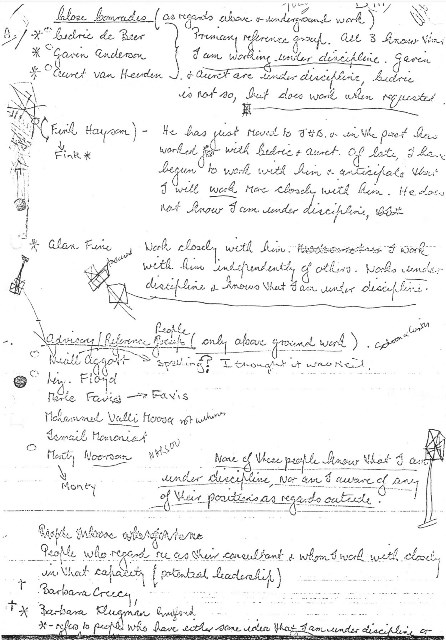 'I knew I was going to be dismissed' – Barbara Hogan