Black woman should be appointed to ConCourt - Civil Society

Of the 4 shortlisted candidates, only one is a woman. Data provided by the Department of Justice and Constitutional Development and JSC during May 2012 confirms the under-representation of women in the judiciary. Only 67 of 237 Judges are women with only 27 are black, 8 are coloured and 12 are Indian.

Sonke Gender Justice Network (‘Sonke') and the Gender, Health & Justice Research Unit - UCT (‘GHJRU') submitted a letter to President Zuma (see below) calling for the permanent appointment of Judge Maya. Members of the JSC were copied in on the letter which was endorsed by several civil society organisations.

The call for the appointment of Judge Maya is based on the need to transform the judiciary so that it is more representative of South African society in terms of both gender and race. It is further based on advancing the rights and interests of women who constitute a disadvantaged group of persons in South African society.

Section 174(2) of the Constitution provides that the judiciary needs to ‘reflect broadly the racial and gender composition of South Africa must be considered when judicial officers are appointed.' Equitable gender representation in the judiciary is supported by various regional and international instruments.

The call for Judge Maya's appointment is motivated by the fact that she is exceptionally well-qualified for the post. She has experience as an acting judge on the Constitutional Court, a history of judgments that have illustrated her exceptional legal analytical skills and gender sensitivity as well as her various successes as a legal scholar including a Fulbright scholarship, fellowship with the Georgetown University, a lecturing post at the Walter Sisulu University and serving as the served as the Deputy President of the South African Chapter of the International Association for Women Judges.

Dr Kelley Moult of the GHJRU says that research shows that the gender of judicial officers is relevant to judicial outcomes. "In a country like South Africa with its extremely high levels of violence against women and low rates of conviction for these offences, this should give us pause. When we consider statements by judges in these cases that view acts of rape sympathetically, or mitigate sentences handed down to offenders for spurious reasons, we can see that women judges, with their particular life experiences, can have an important role in debunking these myths and exposing patriarchal attitudes."

Cherith Sanger of Sonke's Policy Advocacy and Research Unit says that the "fair representation of black women on the bench is essential to ensure that traditional white male spaces are transformed to more gender equitable spaces which entails that decision making power in government is shared equally amongst groups that are disproportionally disadvantaged historically."

Text of the letter to President Jacob Zuma and the JSC, June 1 2012:

THE PRESIDENT OF SOUTH AFRICA

RE: LETTER OF SUPPORT FOR THE CONSTITUTIONAL COURT APPOINTMENT OF JUDGE MAYA

The purpose of this letter is to indicate our support for the permanent appointment of Ms Mandisa Maya AJ on the Constitutional Court („CC') bench during the current selection process.

This letter is addressed to you in your capacity to appoint CC Judges in terms of Section 174(4) of the Constitution Act 108 of 1996 („The Constitution').

Sonke is a non-profit and social justice organisation that strives to achieve gender equality, prevent gender-based violence and reduce the spread and impact of HIV and AIDS. It does so by working in South and Southern Africa to strengthen government, civil society and citizen capacity, including by actively encouraging men and boys to promote gender equality. The organisation is recognised nationally and internationally as a leader in the field and has been profiled as an example of best practice by the World Health Organisation, UNAIDS and by senior government officials in South Africa.

The GHRU is a multi-disciplinary research unit within the Faculty of Health Sciences at the University of Cape Town („UCT'). The Unit undertakes progressive research, education and advocacy in the areas of criminal justice, women's rights, and public health and has a proven history of policy-focused empirical research on gender, health and criminal justice, specialising in issues relating to violence against women.

Sonke and the GHRU's interest in the permanent appointment of Judge Maya on the Constitutional Court bench is rooted in our commitment to the equitable representation of black women in the judiciary and in our belief in the impact of such appointments in contributing to gender transformation in South Africa more broadly.

In South Africa, black people constitute 79.9% of the total population, excluding the 11.5% of the country who identify as so-called "coloured" and Indian population1. Women constitute 52% of the population2. As can be seen from the chart below, women and particularly black women and women of colour are under-represented in South African courts including the Constitutional Court. 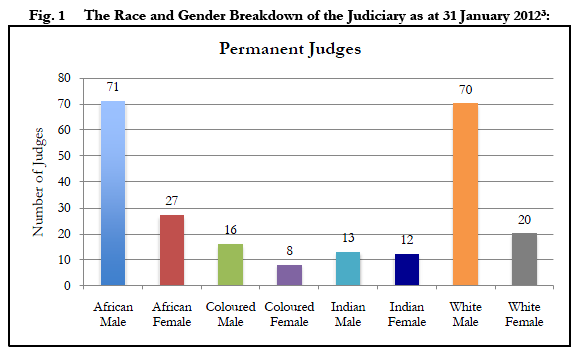 In Chief Justice Ngcobo's farewell speech to Parliament, delivered in August 2011, he stated that: "Of the current judges of the Constitutional Court, only two are women. This needs to change." The current round of appointments provides an important opportunity to meet his challenge.

International instruments such as the United Nations Convention on the Elimination of All Forms of Discrimination against Women (CEDAW) and Article 15 of the African Charter on Human and People's Rights similarly support this constitutional imperative.

The state therefore has an obligation to take steps to advance the interests of disadvantaged groups or categories of persons - among them women - and has a clear legal and moral duty to appointment more women to the judiciary so that the bench is representative of our diverse society in terms of gender and race.

It is also clearly necessary to transform governmental spaces - traditionally occupied by white men and currently occupied by a majority of men (both black and white) - into spaces that are representative of the nation's people at large. The appointment of black women judges contributes to the attainment of a more equitable distribution of decision making power in government, helps to break down the patriarchal stereotypes of women as unsuitable to judge, and helps to improve the way in which female judges are perceived and treated.

Section 174(1) of the Constitution provides that "Any appropriately qualified man or woman who is a fit and proper person may be appointed as a judicial officer". Judge Maya's experience on the bench (in the Supreme Court, the Supreme Court of Appeal and in her current appointment as an acting judge of the Constitutional Court) proves that she fulfils this requirement, and should strengthen the merits of her nomination.

Additionally, Judge Maya was held prestigious positions within government, education and as an advocate, including: a Fulbright scholarship to Duke University School of Law; a fellowship at Georgetown University Law School's „Law and Gender Fellowship Programme'; and a position as a lecturer in Law at the Walter Sisulu University. She served as the Deputy President of the South African Chapter of the International Association for Women Judges (2008-2010). All of these achievements demonstrate Judge Maya's status as a highly respected legal scholar, which is a valuable asset for a Constitutional Court Justice.

Several of Judge Maya's judgments have proven her exceptional legal acumen, which is an essential requirement for permanent appointment to the bench. In addition, her track record of judgments illustrates her sensitivity to gender issues - a quality that is critical in a society with endemic levels of violence perpetrated against women, where socially accepted gender norms and roles perpetuate patriarchy and manifest in gender inequality and discrimination against women.

One of the important judgments handed down by Judge Maya that evidences her high level of legal analytical skills and exemplifies her approach to violence against women is Minister of Safety and Security v F 2011 (3) SA 487 (SCA), which involved an appeal to a claim of vicarious liability for rape. Judge Maya disagreed with the majority judgment that decided that an off-duty policeman who had raped the Plaintiff was not acting in the course and scope of his employment with the South African Police Service at the time that the rape was committed and that the Minister of Safety and Security was accordingly not vicariously liable for the harm flowing from his actions. The Constitutional Court overturned the majority judgment on appeal.

In another important case, Ntaka v S (2008) 3 ALL SA 170 (SCA), the Appellant appealed his sentence of 10 years of imprisonment with 4 years conditionally suspended following a conviction of rape. Judge Maya held that "whilst undoubtedly a robust punishment, the effective sentence of 6 years' imprisonment imposed by the magistrate is fitting in the circumstances of the case" after having regard to the impact of the rape on the complainant, the appellant's lack of remorse, the interests of society and the nature and gravity of the offence.

Judge Maya's judicial record in other areas of law is equally robust. She has been a strong advocate for human rights, and has an impressive record of balancing competing rights, which will serve her well if appointed to the Constitutional Court. During her tenure on the Court as an Acting Justice, she has shown that she has the experience and ability to adjudicate important matters of constitutional law and to occupy a permanent position on the Court.

The appointment of Judge Maya to the Constitutional Court bench is not only warranted because of the merits of her track record as a judge and legal scholar, but is of critical importance in the interests of gender transformation in South Africa. Her appointment will help to address the under-representation of black women in the judiciary, and helps in fulfilling the government's constitutional obligation to consider race and gender in order to ensure that the judiciary reflects the broader composition of South Africa.

We trust that you will consider our recommendation seriously.

Should you have any queries or require any additional information, please feel free to contact the writers at the contact details below:

1 The Centre for Child Law

4 The Gender Programme: The Ceasefire Campaign

[2] SouthAfrica.info, (no date). South Africa's Population - At a Glance. [online] Available at <http://www.southafrica.info/about/people/population.htm> [Accessed on 16 April 2012].

[3] Data provided by the Judicial Service Commission and Department of Justice Constitutional Development in personal communication, May 2012.

Candidates for the ConCourt - JSC