School safety a priority for the City

This morning, 27 January 2015, I visited schools in Manenberg where our staff have been working closely with other role players, including the South African Police Service (SAPS), to ensure a safe passage for learners to and from school in the wake of ongoing volatility in the area.

The City's Safety and Security Directorate has maintained an increased presence in Manenberg since a flare-up in gang violence in mid-December, but the focus has shifted to include learner safety since the beginning of the academic year last week. Currently, we have 110 staff members deployed in the area, from Metro Police, Law Enforcement and Traffic Services. Some of the officers are conducting static patrols at five primary schools (Edendale, Red River, Rio Grande, Sonderend and Downeville) as well as Silverstream Secondary and Manenberg Secondary schools. The rest are conducting roving patrols in the hours before and after school.

This is not the first time that the City's enforcement agencies have fulfilled this role, with a similar deployment in Manenberg in 2013/14 (see more here). We will maintain our presence in the area until such time as the situation has stabilised sufficiently to ensure that learners can make their way to and from school without the persistent threat of being caught in gang crossfire.

Recently, the Safety and Security Directorate was awarded R4,5 million as part of the City's Adjustments Budget for our Stabilisation Project to assist communities in volatile areas, as is the case in Manenberg, as well as our School Resource Officers Project.

I initiated the School Resource Officers (SRO) Project in 2013 after identifying a critical need around school safety - even though this is not a City competency (see more here).

An external assessment of the project showed that there had been a small decrease in violent incidents at the six schools as well as a reduction in the drop-out rate. The assessment found that the programme was 82% effective and highlighted areas of improvement. Effectively, the pilot project has successfully given us proof of concept and we are now implementing a more long-term project, which includes migration from the Metro Police Department to the Law Enforcement Department and establishing a dedicated budget to fund the project. Soon, we will be appointing 30 SROs at schools across the metropole.

We are also working on safe movement routes to and from the schools that the new SROs will attempt to create with the SAPS, our Metro Police Department, and neighbourhood watch organisations, etc.

The programme is not primarily meant for staff to act as security guards at schools - that is what security guards are for. The officers are trained to deal with other issues such as truancy, home visits, and running after-hours programmes for high-risk youth they have identified with the school, e.g. to run mentoring programmes with credible messengers. 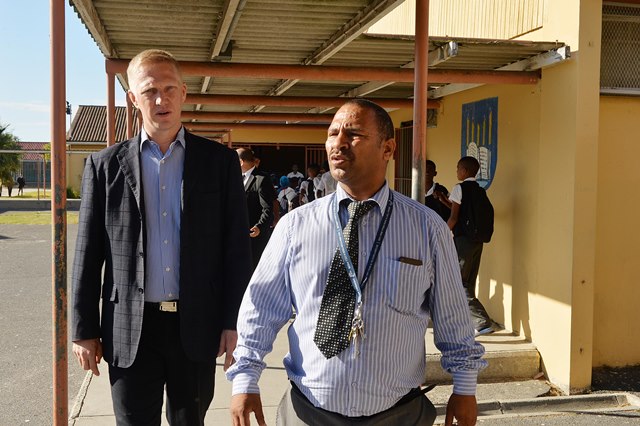