MZANSI is gripped by evil forces . . . And that has turned black people against each other! THIS IS THE VISION OF FAMOUS PROPHET CREDO MUTWA. And now he is retiring a sad, worried and tired old man.

Ntate Mutwa (92) spoke at the weekend to the People's Paper in his village of Majakaneng outside Kuruman, Northern Cape. He would not give details of the evil spirit gripping the country. But he said black people were being paid to kill one another.

And these forces didn't want Africa to prosper.

Mutwa refused to predict the results of next year's general election - or what the future holds for Mzansi. But he said the forces dividing black people made him fear for his life. They killed his first wife and torment him to this day.

They also wanted to kill his beloved wife Virginia, he said. The ailing seer is known internationally for his prophecies. He warned Hendrik Verwoerd, father of apartheid, that he would be assassinated. And he foretold HIV/Aids and the 9/11 attacks on the US as well as the assassinations of Chris Hani and US president John F Kennedy.

But Mutwa said he was retiring from prophesy as people had taken advantage of him. "My heart is too angry. I don't want to talk any more. It doesn't help. Some people take me for a joke! If I were to open my chest the country would be shocked. But as I said, I'm deeply hurt by how I have been treated," said the unhappy prophet.

He said his wife rescued him twice from death. "You should have let me die," he told her. "Next time they come for me, don't rescue me. I'm tired. In South Africa when you speak the truth, you are killed," he said wearily.

Mutwa still has a burning desire to prophesy, and it pains him to fall silent. But his wife fears for his life.

"Maybe I should die first as I'm under so much pressure with this man," said Virginia. But Mutwa said: "I would rather die first. You see, gentlemen, this woman has done so much more for me than I care to tell you about."

Virginia said: "This man is old. Journalists come from all over to interview him. I have to protect him all the time.

"The Mandelas have retired from public life. That's what we're asking - for ntate Mutwa to be left alone," said Virginia. 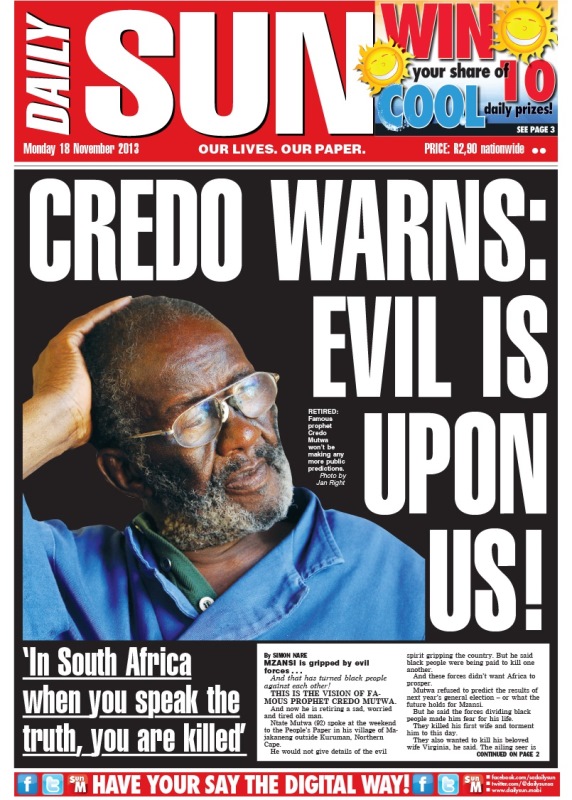 The Daily Sun is South Africa's largest daily newspaper with an average circulation of 291 000 (Audit Bureau of Circulations 3rd Quarter 2013) and a readership of 5.7m (as per AMPS 2012ab). Its Facebook page can be accessed here. It can be followed on Twitter here. To find about advertising on the Daily Sun click here.

Shoprite exits Nigeria – What makes Africa such a challenging place for SA retailers?