The latest crime statistics for the third quarter of 2020 that were released today are encouraging with so-called contact crimes between persons decreasing with 11,6%.

These figures must, however, be considered in the context of the lockdown period during which people mostly stayed home.

A great cause for concern is the increase in robberies at residential premises and the sharp rise in farm murders compared to the same period last year.

Robberies at residential premises is the one crime most feared by the public. It has increased with 8,5%, which is alarming.

It is extremely traumatic for people to be overpowered and robbed in the safety of their own homes and many people are also seriously injured during these incidents. The police must focus more on preventing this.

With regard to farm murders, there was an alarming increase of 62,5% compared to the same period last year. Thus, the FF Plus is once again requesting that farm murders must be declared a priority crime. 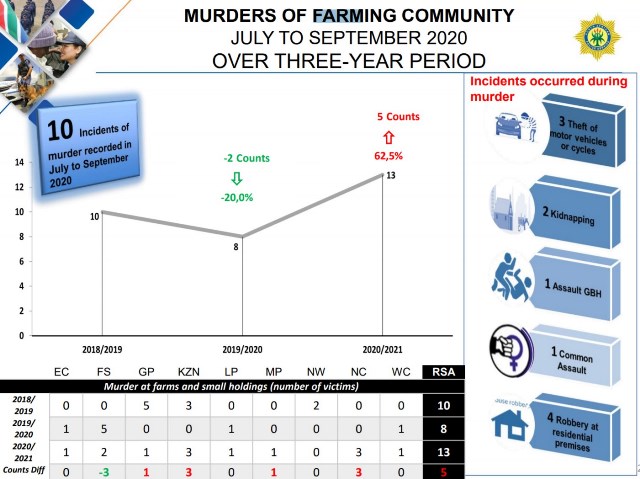 The Minister of Police, Bheki Cele, did indeed say that farm attacks and murders, like other violent crimes, will now also be considered priority crimes seeing as they are very serious offences that warrant immediacy response. Livestock theft is also linked to this.

The police service must ensure that the rotten apples are removed from its ranks. It will help to ensure that crime is more effectively combated in the future.

Voters increasingly turning to the FF Plus – Pieter Groenewald