An effort by former Democratic Alliance leader and Western Cape Premier to suggest that South Africa should learn the lessons of Singapore’s success has resulted in her being denounced by numerous DA MPs and her referral to the Federal Legal Commission by party leader Mmusi Maimane.

The offending series of tweets read as follows:

Much to learn from Singapore, colonised for as long as SA, and under brutal occupation in WW2. Can we apply the lessons in our democracy?

Singapore had no natural resources and 50 years ago was poorer than most African countries. Now they soar. What are the lessons?

Other reasons for Singapore's success: Parents take responsibility for children, and build on valuable aspects of colonial heritage.

For those claiming legacy of colonialism was ONLY negative, think of our independent judiciary, transport infrastructure, piped water etc.

Would we have had a transition into specialised health care and medication without colonial influence? Just be honest, please.

Getting onto an aeroplane now and won't get onto the wi-fi so that I can cut off those who think EVERY aspect of colonial legacy was bad.

The third last tweet in particular contravened an important article of faith of African nationalists – that the colonialists are to blame for all of Africa’s misfortunes – and this provoked a virulent reaction from within the DA itself.

“It was ONLY negative!!Colonialism=development argument is trash as those subjugated can attest to.”

“It's like saying Nazism was good for German democracy and their advancements in technology.”

DA leader Mmusi Maimane responded: “Let's make this clear: Colonialism, like Apartheid, was a system of oppression and subjugation. It can never be justified.”

This was endorsed by Makashule Gana‏: “My leader has spoken. We must never ever ever justify Colonialism or Apartheid”

The DA’s official Twitter account stated: “Colonialism, like Apartheid, was wrong. It oppressed millions of people and violated human rights in a cruel and inhumane way. #HelenZille”

Other DA public representatives piled in:

Natasha Mazzone‏: “Colonialism was evil, plain and simple! It caused suffering and misery to millions the world over. It CANNOT be defended or justified, EVER”

Gordon Mackay MP‏: “I do not share @helenzille view that colonialism had "some benefits". A system of Oppression & racial supremacy can never be justified. Sad.”

Terri Stander “I do not share Helen Zille view that colonialism had some benefits. Oppression & racial supremacy can never be justified. Disappointed”

Dean Macpherson “There was and is nothing good about colonialism which brought misery to millions of people's lives across the world, especially in Africa.”

Phumzile Van Damme‏  “Colonialism was a crime against humanity. There isn't a single aspect of it that can be said to be positive or beneficial to Africans.”

Midvaal Mayor Bongani Baloyi: This is not our party position. This is @helenzille personal view. To me this is praising apartheid. Totally wrong.

Solly Malatsi: “There's nothing about colonialism worth celebrating. Its infrastructure is a scar on black people's dignity and a reminder of our pain.” 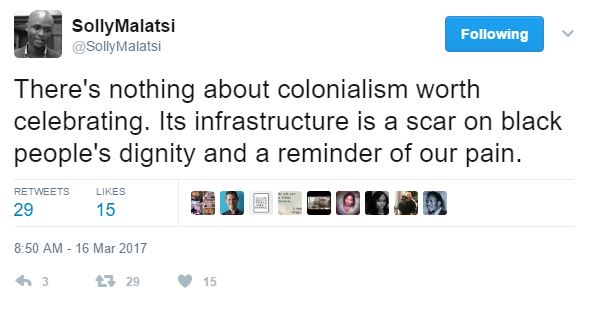 Helen Zille reacted by apologising if her remarks could be misconstrued: “I apologise unreservedly for a tweet that may have come across as a defence of colonialism. It was not.”

Terri Stander‏ also called for action to be taken against the Western Cape Premier: "Helen Zille has breached clause 2 of @Our_DA Social Media Policy. I trust disciplinary steps will be instituted. #NotInMyName @helenzille"

In a statement issued by Phumzile Van Damme the party then stated that Zille had been referred to the Federal Legal Commission for investigation over her Tweets “which may have violated the DA’s social media policy for public representatives. Ms Zille has already issued an unreserved apology for her tweet.”

It added that: “Colonialism, like Apartheid, was wrong. It oppressed millions of people and violated human rights in a cruel and inhumane way. Colonialism, like Apartheid, is in every single way against our cherished values of Freedom, Fairness and Opportunity for all. The DA is party that is committed to redressing the wrongs of the past. We want to build a united South Africa – one nation, with one future.”