Fall in line with the Fallists, or else

At the now well documented UCT convocation meeting, held on the 15th of December 2016, I dared to suggest that the agreement reached with a small group of students though with university wide consequences was illegitimate.

It was my intention to amend the motion of no confidence in the Vice Chancellor to instead reflect as a motion of no confidence against the agreement reached. The UCT agreement is deficient for reasons of it failing to be representative and failing to assert not just institutional values but constitutionally enshrined principles of academic freedom, free speech and the rule of law. All these principles were violated on numerous occasions and placed under threat during the 2015/2016 protests, and therefore warranted assertion in any agreement reached.

Instead the UCT agreement while supporting decolonisation, and admitting to a lack of comprehension of its meaning, remains silent on the above principles. Which can only read as their wilful exclusion. But holding these views as a black South African comes with significant consequences. For the transgression of not conforming with the loudest black voices I apparently deserved nothing less than to be racially insulted and defamed. The defamatory remarks relate to the false allegation that I have lied about my post matric qualifications. 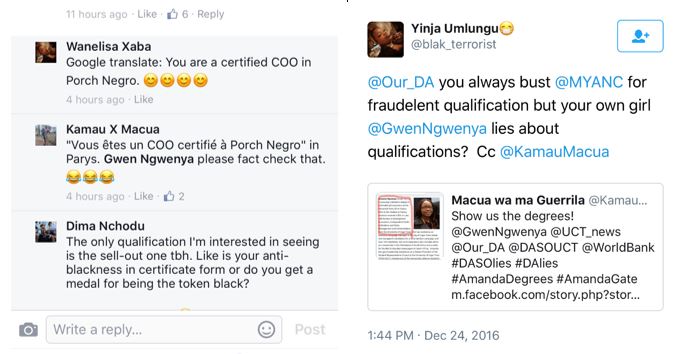 At my most charitable I thought that perhaps there had been a legitimate confusion created by a World Bank post that cited that I have a BSc in Law (when in fact I have a BSocSc majoring in Law).

I have no obligation towards the accusers, but because I was concerned about doing the right thing I reached out to the World Bank. I requested that they correct their error in my bio and change the degree from UCT to a Bachelor of Social Science instead of a BSc in Law. The CV which a professor in the masters’ programme at Universite Paris Est Creteil forwarded to the World Bank, in his letter nominating me, clearly indicates that I have a Bachelor of Social Science. The error on the website, i.e. BSc instead of a BSocSc, could only have been caused by confusion in the mind of the person posting for the World Bank about degree abbreviations in different countries, or as a simple typo.

Two days after writing an email to the World Bank and to my surprise, this monolithic entity with a vast array of projects underway across the world, swiftly corrected their entry. I am embarrassed quite frankly that anyone at the World Bank had to distract themselves from important work to handle what must have appeared to them a most trivial matter. I don’t believe I have expended political capital from the exercise but it would have been preferable to reconnect with the World Bank on project terms and to share knowledge rather than to ask for assistance on political trifles.

That I went to such lengths in concern for the truth will not matter to those who falsely accused me. They will likely rubbish the World Bank in its entirety as a product of Western colonialism and all the better if they have contributed even in the slightest to muddying a relationship with them. Nothing is serious to these people, there is no situation worthy of professionalism or dealings with people worthy of some integrity.

It is a difficult decision to decide whether to respond publicly to an issue such as this. On the one hand a response adds fuel to the fire and you give time to people who are desperate for attention. I cannot relate with the fervour and time various people have spent dedicated to creating posts, memes and videos of me. Due to the character and nature of the accusers the initial feeling was to not take this matter seriously, however it becomes necessary to respond when journalists start taking these matters up in earnest. The allegations now move beyond the social media universe of the accusers to the readership of the news publications.

The first journalist to contact me was from the Huffington Post. As I was on holiday I took the liberty to meet him at their offices where he was able to view my degree certificates as well as the email chain of my communication to the World Bank. To the Huffington Post’s credit not only did they find it prudent to contact me for comment, they have subsequently not gone to print with the false allegations. The Citizen however ran a piece on the false allegations without approaching me for comment; it would have been a polite courtesy, in addition perhaps, to a journalistic obligation to do so. More recently The Weekend Argus has approached me for comment on the matter.

In any case, I put it down to the slow news mill of the holiday season that there should be any interest at all in publishing false allegations of my having fraudulent degrees. After all I am no Hlaudi Motsoeneng. Rumours of my influence are profoundly exaggerated and patronizing. Taking the ‘no degrees theory’ to its logical conclusion it would mean that having no qualifications I managed to find employment in India as an economic researcher and then at a global financial technology company in the United Kingdom. The extent of the global patronage networks I am assumed to have to pull off such a feat is impressive, it is also patronizing because I worked hard for those opportunities. This is not the type of allegation where there are two sides to the story. Someone either has in their possession certain qualifications or they do not. It is a verifiable fact not a polling exercise.

Unlike the suggestions from various quarters to criminalize racist speech, I would readily defend anyone’s right to call me a porch negro. I know it to be false because I had a controversy-free role in financial technology before joining the Institute, if it is financial reward and peace of mind I am after in the long term, then I am certainly barking up the wrong tree. But pejorative labels aside what is truly indefensible are the blatant lies that are easily spread on social media and accepted and repeated. Some would call the unwillingness to accept evidence and easily verifiable information the consequence of a ‘post-truth’ society. But I agree with Jonathan Freedland writing in the UK’s Guardian that to call it post truth is just pretentious obfuscation, “there is a simpler word: lies”.

The salient reason for speaking out is that I know there are black liberals, in the broad sense of commitment to free speech, rule of law etc, who are watching. I know this because I speak to some of you, some disillusioned struggle stalwarts, some young professionals, some students on university campuses. And I know that incidences such as these make others fearful to talk against the herd.

Personally bravery has always had a connotation of overcoming fears, and pursuing a course in spite of one’s fears. For this reason I have never considered myself brave, because I have never been afraid of confrontation or rejection. I have felt angry and often powerless in the face of events but never afraid. But I am asking for other black liberals to be brave; a triumph over fear of rejection and conflict that I cannot relate to, but which must be possible because I have witnessed others do it.

What is it exactly that people need to be brave for? Primarily for the new politics. This is not the place to delve into its history and development, suffice to say that there is an increasing tendency towards: a) an intolerance for fact based debate, if you want to be fancy call it post-truth; b) labels to discredit arguments- ‘racist’, ‘house negro’, ‘white monopoly capital’; and c) the eroding of language which is the eroding of meaning, and at its conclusion the eroding of the ability for us to communicate with each other. On the latter point I am no longer sure I understand what violence and trauma are anymore if they can be associated with the simple act of disagreement.

Ultimately at this stage what I would want is a public apology from the likes of Andile Mngxitama and the Fallist individual who has been largely responsible for spreading the numerous posts on social media and to journalists of my fraudulent qualifications. As I have never been in contact with these individuals and have no desire to, I have deferred the legal process to my attorney. The ask is simple; they may continue to call me a house negro and use other slurs but they must refrain from distributing false information regarding fraudulent qualifications. But it seems they are geared for a long drawn out fight, which depending on the legal advice will need to be balanced against the more pressing need to focus on the Institute’s core work and to abandon the pseudo-revolutionaries to play out their game. 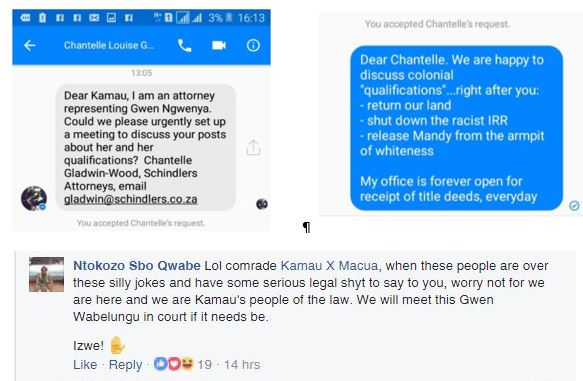 No doubt that the black nationalists having found this allegation to have no legs will find something else to shame me with. I believe as I pen this they are devising new ways to deal with errant blacks such as myself, as this post by Andile Mngxitama clearly illustrates:

The witchhunt will not stop because they are determined to make the impersonal personal. But instead of fearing it I look forward to the day when my character has been so reduced that there is nothing left to diminish but the ideas. Then with the woman aside, hopefully they will be able to see more clearly the arguments which stand on their own unmoved by the character assassination.

The irrational zeal that drives tactics of intimidation is not reserved only for me, I admit to being a somewhat parochial cog in this machinery of hate and fake news. I have experienced what numerous professors at UCT have encountered for a protracted period, and which like a virus will spread to all corners of academic, political and economic life of the country. This is not a prediction it is already happening, and I hope my account lifts the veil on the mounting intolerance and unethical means in which dissenting voices are handled in South Africa.

Making sense of the student protests

Time to let go of the ANC