On Wednesday, 16 August 2017, the Embassy of the Republic of Zimbabwe invoked immunities of Dr Grace Mugabe in relation to the alleged case of assault widely reported in the media.

The Minister considered the communication from the Embassy in accordance with the discretion granted to her by section 7(2) of the Diplomatic Immunities and Privileges Act.

After careful consideration of all the relevant factors, including the following:

the Minister has made the determination that the conferring of diplomatic immunity is warranted in this particular instance.

The Department wishes to convey the message that the Minister has agonised over this matter and the decision was not an easy one to make.

Statement issued by the Department of International Relations and Cooperation, 20 August 2017 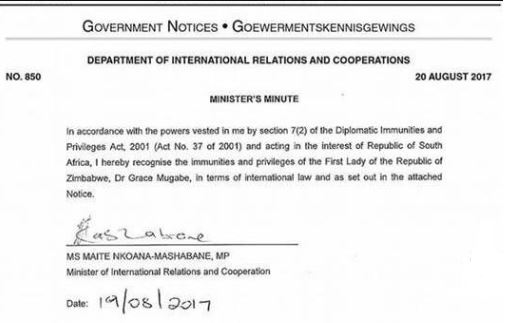