An estimated 6.4 million people were living with HIV/AIDS in 2012. This is one of the main findings of The South African National HIV Prevalence, Incidence and Behaviour Survey 2012, officially launched today by Minister of Science and Technology, Derek Hanekom, and the Minister of Health, Dr Aaron Motsoaledi, at the Human Sciences Research Council (HSRC) offices in Pretoria, and by video conference in the Durban and Cape Town HSRC offices. The launch of the survey was chaired by Nelson Mandela Foundation Chief Executive, Sello Hatang.

The 2012 survey, is the fourth in the series of national HIV household surveys conducted by a consortium of scientists led by the HSRC, including the Medical Research Council, South Africa's statutory research agencies. The first in 2002 was followed by surveys in 2005 and 2008. These surveys collected data on not only the HIV status of individuals, but also information on socio-demographic and behavioural factors that greatly enhanced the analysis and interpretation of the observed trends in HIV prevalence (the proportion of people living with HIV in the country) and HIV incidence (new HIV infections in a given year).

The inclusion of novel laboratory methodologies in the 2012 survey protocol enabled direct estimates of HIV incidence and exposure to antiretroviral treatment (ART). The data from the 2012 survey will serve as critical benchmark figures for the evaluation of the current National Strategic Plan (NSP) 2012-2016.

Over 38 000 people were interviewed and almost 29 000 agreed to be tested for HIV. The estimated overall prevalence of HIV increased from 10.6% in 2008 to 12.2% in 2012. According to the Survey, the increased prevalence of HIV in 2012 is largely due to the combined effects of new infections and a successfully expanded antiretroviral treatment (ART) programme. The availability and use of ART has increased survival among HIV-infected individuals. HIV prevalence in the 15-49 year age group was 18.8%, but was significantly higher in females (23.2%) than in males (14.5%).

"I am pleased to see that more people with HIV are living longer, because of the hugely expanded treatment programme launched by the Government. The disproportionately high HIV prevalence levels among females in the country, and high HIV prevalence in unmarried cohabiting people however, require a rethinking of conventional approaches of HIV prevention towards strategies that address the underlying socio-cultural norms in the affected communities," said Principal Investigator, Prof. Olive Shisana, HSRC CEO.

A noteworthy observation was the slight decline of HIV prevalence among youth aged 15-24 years from 8.7% in 2008 to 7.3% in 2012. As a result of the country's successful Prevention of Mother to Child Transmission (PMTCT) programme, HIV infection levels also further decreased in infants 12 months and younger, from 2.0% in 2008 to 1.3% in 2012.

Another key finding of the 2012 Survey was that over 2 million people were on ART by mid-2012, suggesting that the country is on its way towards universal access to treatment.  This significant increase of ART exposure in the country has had a major impact on the survival of people living with HIV.

"South Africa is currently implementing the largest antiretroviral treatment programme in the world. This is a very positive development. Unfortunately, with over 400 000 new HIV infections occurring in 2012, South Africa also ranks first in HIV incidence in the world. There is a need to balance treatment and prevention efforts in the country," cautioned Professor Thomas Rehle, Director & Senior Programme Advisor in the HIV/AIDS, STIs and TB (HAST) programme and Principal Investigator of the study.

Compared with 2008 data, there were trends for a decline in condom use in all age groups, except for the 50 years and older group and an increase in multiple sexual partnerships among sexually active people aged 15 years and older in 2012. "The increases in some risky sexual behaviours are disappointing, as this partly accounts for why there are so many new infections still occurring in South Africa. We must therefore keep reminding South Africans to avoid being complacent when it comes to HIV prevention and to continue to engage in safer sex practices in order to prevent new infections. This is a must, especially in this new era of ART, if we are to benefit maximally from combination prevention involving biomedical, social and behavioural, and structural interventions," said Professor Leickness Simbayi, Executive Director, HAST programme, HSRC, and a Principal Investigator on the study.

Another concerning finding is that the majority of the respondents aged 15 years and older (76.5%) believed that they were at low risk of acquiring HIV infection. Unfortunately, approximately one in ten who believed they were at low risk for acquiring HIV infection was already infected but didn't know it. Furthermore, the overall knowledge about how HIV is transmitted and prevented also declined from 30.3% in 2008 compared to 26.8% in 2012.

Attitudes of South Africans towards Persons Living with HIV (PLHIV) however, have improved considerably since 2008. This could partly be the result of the wider availability of ART in the country, as well as the fact that many people have been tested and know their HIV status. Professor Demetre Labadarios, Executive Director of the Population Health, Health Systems and Innovation programme, HSRC, and also one of the four Principal Investigators of the study, commented, "This finding shows a very positive development in our national response to HIV/AIDS and must be strongly commended as it contributes towards normalizing HIV/AIDS as a disease."

In summary, the findings of the report underscores that while the country is on the right track with the provision of ART, national HIV counselling and testing (HCT) efforts, and greater access of PMTCT, more other biomedical, behavioural, social, and structural prevention interventions are needed to reduce the high rates of new HIV infections.

This survey has been supported by the President's Emergency Plan for AIDS Relief (PEPFAR) through the Centers for Disease Control and Prevention (CDC) under the terms of Cooperative Agreement Number 3U2GGH000570. The survey findings are solely the responsibility of the authors and do not necessarily represent the official views of CDC. Additional financial support came from the South African National AIDS Council (SANAC), the Bill and Melinda Gates Foundation, the HSRC and the United Nations Children's Fund (UNICEF).

The HSRC deeply appreciates the participation of South Africans in the survey which led to the production of the only regular comprehensive national report on the status of the HIV epidemic and the social determinants in this country. 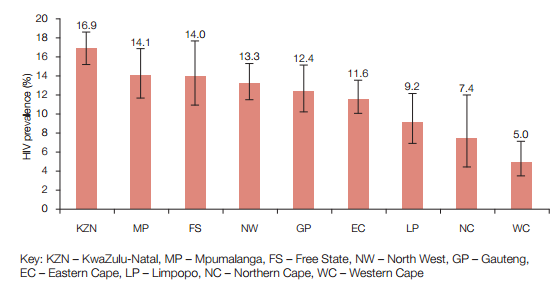 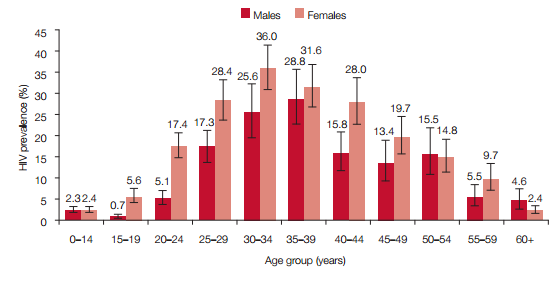 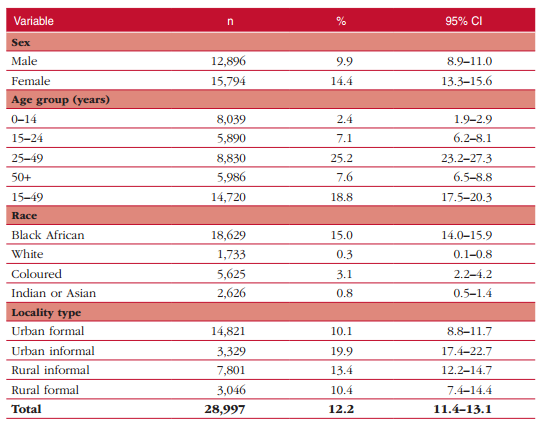