A reply to a DA parliamentary question has revealed that SABC Chief Operations Officer (COO), Hlaudi Motsoeneng, was paid R2.8 million in 2013 - even more than President Zuma.

Mr Motsoeneng's rise at the SABC is remarkable, particularly given the Public Protector's findings in February that he:

Lied about having a matric when applying for the COO position and previous positions at the SABC.

Violated SABC personnel regulations by having his salary increased three times in the space of one year -- from R1.5 million to R2.4 million.

Was responsible for other unlawful salary increases that saw the SABC's salary bill escalate by R29 million.

The DA maintains that Mr. Motsoeneng should have been fired some time ago. The inescapable conclusion is that he has been protected, promoted and rewarded for his political loyalties to President Zuma.

The reply also reveals that SABC staff members were paid more than R 65 million in bonuses this year despite numerous ongoing problems plaguing the SABC.

The DA supports a system of bonuses and salary increases based on individual performance. Indeed, there are many dedicated SABC journalists and operational staff who do excellent work under very difficult circumstances. They should be commended and rewarded.

The Auditor-General (A-G) last year issued a disclaimer of opinion in its audit of the SABC. The A-G found that the SABC was unable to provide documentation for more than R1.5 billion in expenditure.

It is unclear how the SABC can justify the paying of exorbitant salaries and bonuses given the huge challenges that remain at the public broadcaster. The DA will therefore be calling on SABC Chairperson, Ms Ellen Tshabalala, to appear before the Communications Portfolio Committee to explain the millions of rands paid out in bonuses and salaries. 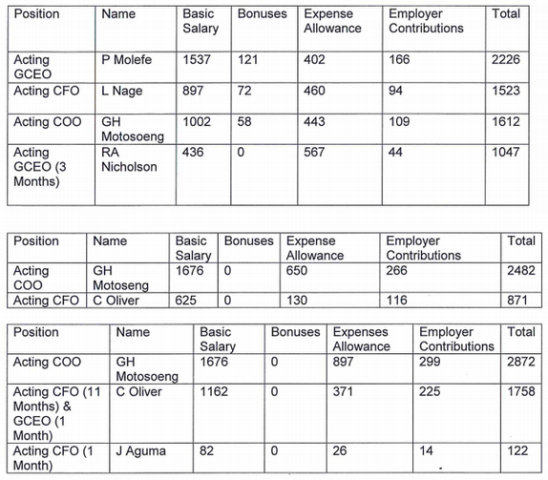 Blitzbokke return as 7s circuit given the green light