We examine the data from the UK, US, Australia, Canada and other states

Over the past few years there have been periodic bouts of speculation and controversy over the extent of South Africa's brain drain. Statistics South Africa stopped collecting data on emigration several years ago, and the flawed conduct of the 1996 and 2001 censuses has left question marks hanging over calculations based on other official data.

In 2006 the South African Institute of Race Relations estimated - by comparing the figures in Stats SA household surveys from 1995 and 2005 (as well as analysing other data) - that 841 000 white South Africans had left the country in that period.

However, as Patrick Laurence pointed out at the time there had been a considerable undercount of whites in the 2001 census and as a result the whites "who ‘disappeared' between 1995 and 2005 may not have emigrated. They may simply not have been counted in the 2001 census and consequently may not have been reflected adequately, if at all, in subsequent statistical data released by Stats SA."

Laurence further quoted Hilary Southall, a member of the Statistics Council, as saying that if the SAIRR had used the 1996 household survey figure as its starting point - rather than the 1995 one - the decline in the white population would have been measured at 127 000.

19 OECD countries keep this sort of data. As the table below indicates - in 2010 - at least 588 388 individuals in these countries were recorded as having been born in South Africa. The real figure is likely to be higher than that as the figures for Canada and New Zealand date from 2006 and since then there have been further documented inflows of South African born migrants.

According to separate OECD data on the inflows of foreign population by nationality 17 840 South Africans moved to these five countries in 1997 (the first year for which full data is available.) This trended upward before peaking at 44 227 in 2004. These inflows have subsequently declined somewhat, particularly to the United Kingdom, and in 2009 28 933 South Africans were recorded as having moved to these countries. In 2009, for the first time, more South Africans moved to Australia than to the UK (see graph below).

The major push factors, particularly for white South African emigrants, have traditionally been put down to high levels of violent crime (often personally experienced) and the racial employment policies of the African National Congress government. To these one could perhaps add the growing evidence of state decay and a resurgence of demands by ANC politicians for something to be done about continued white wealth.

The pull factors have recently weakened considerably due to the global financial crisis. However, if the ANC govt decides to go ahead with threatened amendments to the Employment Equity Act - which would apply punitive sanctions to companies that continued to promote whites into senior and top management positions - we are likely to see another surge of emigration by this group. 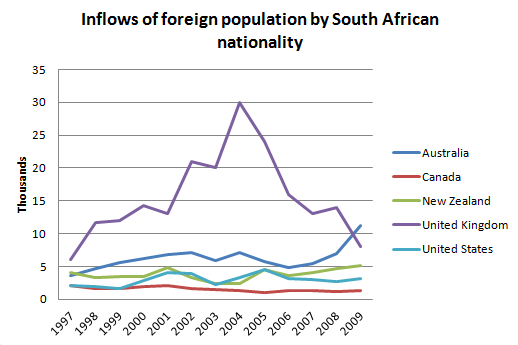 AfriForum vs Minister of Tourism: The SCA judgment

What are we celebrating on Heritage Day?

Rob Hersov: This is our government. If they’re destroying the country, vote them out