How to ruin a newspaper group

Over the past week Gavin O'Reilly stepped down as chief executive of Independent News & Media (INM) bringing to an end, as one newspaper noted, "four decades of control of the Irish and South African newspaper company by the O'Reilly family." Simon Kelner, the former editor of the Independent (London) - once the flagship paper of the INM group - commented on Twitter: "It always ends and it always ends badly. The sad demise of the O'Reilly newspaper dynasty. A family of huge integrity who believed in papers."

It is likely that many South African journalists would have a somewhat different view of this matter. In 1994 Tony O'Reilly's INM was handpicked by ANC President Nelson Mandela to purchase the Argus Group newspapers. As his biographer Ivan Fallon wrote in a 2009 article:

"In 1994, as South Africa moved towards its historic election, [Tony O'Reilly] pulled off the best deal in Independent's history with the acquisition of Argus Newspapers, the biggest newspaper company in the country. Again it was a close-run thing, with [Conrad] Black and Rupert Murdoch among a number of interested parties. The balance was tipped however by his friendship with Nelson Mandela, whose blessing was required by the owners, JCI."

There are two basic charges that can be laid against the O'Reilly dynasty's subsequent management of their South African assets. The first, as noted before on this website, is that the new INM management sought to reposition the formerly independent minded Argus newspapers as pro-ANC-government ones.

In September 2000, in one of the most shameful episodes in South African newspaper history, the Independent Newspaper management gave free space in their publications to government to defend and obfuscate President Thabo Mbeki's 'denialist' views on AIDS.

In an interview with Time Magazine earlier that month Mbeki had been asked whether he was prepared to "acknowledge that there is a link between HIV and AIDS?" He replied: "This is precisely where the problem starts. No, I am saying that you cannot attribute immune deficiency solely and exclusively to a virus."

These remarks caused an uproar and in an effort to dampen down the outrage the GCIS, then under the control of Minister Essop Pahad, came up with the following statement:

"A great deal of attention has been devoted, locally and internationally, to issues raised by South Africa over HIV and AIDS. To put the issues beyond doubt in the public mind, particularly so that the battle against this scourge may proceed with full vigour, the following statement is issued by the Government. Specifically it is stated with emphasis that - as reference to the record will show - neither the President nor his Cabinet colleagues has ever denied a link between HIV and AIDS."

This statement first appeared as an advertisement in The Star and other newspapers owned by INM on September 15 2000. See below. 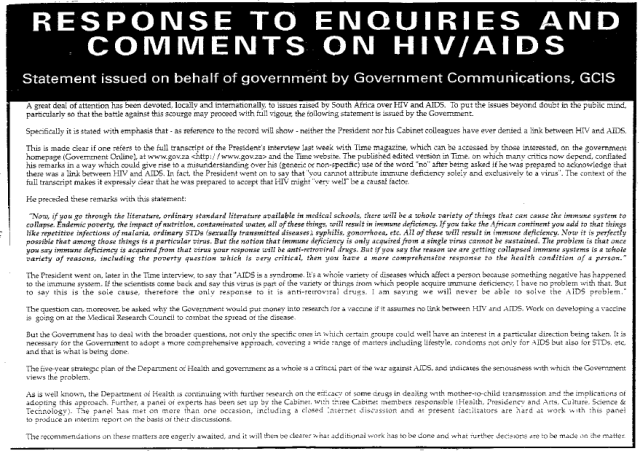 This intervention was also the lead story in The Star (and Cape Argus) on that same day. The headline of The Star's report was: "Mbeki acts to calm AIDS storm: ‘He never said HIV does not cause AIDS' government says in advertisements intended to clarify the president's views."

A few weeks later it emerged that these GCIS advertisements had been placed, for free, in these newspapers by the company's management, without the knowledge or consent of most editors of these titles. According to a Business Day report on October 9 2000 "Shaun Johnson, the Independent group's regional MD in Cape Town refused to comment on allegations that he personally offered the space to government free of charge. Tony Heard, one of Mbeki's special advisers, would not confirm or deny speculation that he had clinched a deal with Johnson for the free space."

However, Tony Howard, the company's chief operating officer, defended the decision to place these free ads. He told The Star (October 10 2000) that "The Independent Newspapers management committee decided - ‘with the explicit understanding that no precedent was being set' - that it was in South Africa's best interest for the [GCIS] statement to be disseminated as widely as possible'. Howard said 'public interest interventions' of that kind were ‘both the right and duty of a media group" committed to ‘the betterment of South Africa and all its people'."

The second charge that can be made against O'Reilly & Co. is, obviously, that they cut costs down to the bone in their South African operations. In Business Report - which is owned by Independent Newspapers - Ann Crotty noted this week that "Local analysts say it is likely that, after making some provision for tax, the bulk of the approximate R4.5bn operating profit that INM South Africa has generated since it was delisted from the JSE in 1999 made its way to Dublin with minimum amounts invested in South Africa. The R4.5bn represents an extremely attractive return on the approximate R650m that INM initially paid to acquire the operations. Employee numbers since the initial move have been reduced from about 5 000 to 1 700."

This 66% reduction in the number of employees helps explain why INM has been able to maintain a profit margin of around 20% in its South African operations despite the substantial declines in the circulation of its flagship English-language daily broadsheet titles. See graph below.

The O'Reilly family may have believed in their Irish and British newspapers. But they certainly did not care for their South African ones. 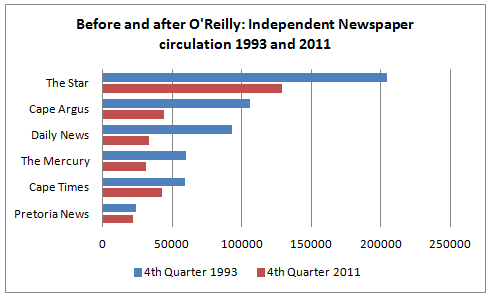 Apartheid and the universities

MUST WATCH: 72 HOURS OF ANARCHY – a first-hand account of the civil unrest in July