Independent Media: The Iqbal-ites strike back

Karima Brown, Vukani Mde and Gasant Abarder respond to criticism of the new editorial guard at the group

In a series of letters and articles the new editorial guard at the Iqbal Survé owned Independent Media group have struck back at their critics. This follows allegations, from various fronts, of the group's subservience to the African National Congress of President Jacob Zuma.

Karima Brown, the Chief Content Officer of Independent Media, has defended her decision to publicly apologise to the Presidency for a claim made in a newspaper column by Max du Preez - a decision which triggered the latter's decision to withdraw his column from the group's titles. She has also accused Du Preez of dishonesty and racism in regard to his December 30 2014 ‘Zuma - South Africa's one man wrecking ball' article.

In his column Du Preez had referred to Zuma's "corrupt relationship (in the words of a judge) with his financial adviser [Schabir Shaik]". The apology published by Independent Media said that this claim was factually inaccurate as "the judge referred to in the piece [Hilary Squires], indicated that he had not made that statement so often attributed to him in the media, and went to great lengths to correct the misconception." Du Preez responded by pointing out that while Squires had not used the term (something he had not claimed), the Supreme Court of Appeal had (twice) in their judgment dismissing Shaik's appeal against his criminal conviction.

(The full background on the original controversy in late 2006 can be found here.)

In an article published on the Business Times website on Friday wrote that by "any reasonable interpretation" Du Preez was referring to Squires. His claim that he was actually referring to the SCA's judgment, authored by Justice Craig Howie, "is a highly dishonest ex post facto summersault. What Justice Howie read out cannot be described as the ‘the words of a judge'. It was the finding of a court." Brown commented:

"Whether it is embarrassment at having repeated an eight-year old mistake, or sheer hubris, that makes du Preez refuse to concede that he can make even the tiniest error, I will never know. But it is indicative of a general absence of self-reflection in our media and a refusal to hold ourselves to the same standards of probity we aggressively demand of others. It seems the notoriously thin skins of our politicians are matched only by those of our journalists and editors."

Brown also emphasised that she had defended Du Preez's right to free speech, including "his right to spew out deeply racist statements such as this: ‘the debt [Zuma] owed to those who put him in power and his obvious view that he was more of an African chief than the president of a modern democracy led him on a different path'."

Brown went on to accuse Du Preez' letter terminating his relationship with the Independent Media as being "absurdly dishonest" in painting his decision as one of principle. "The only principle at stake here" Brown wrote "is our principled duty to be accurate, and to own up when we've erred. It's a principle I value, while he clearly does not."

Brown concluded her article by suggesting that both Du Preez and those who have supported him were motivated by racism, concluding:

"... du Preez's resignation has become a rallying point for the malcontents and closet racists, both in and outside newsrooms and media houses, who resent the acquisition of a significant media asset such as Independent by black owners, and who have at every turn sought to challenge and limit our right to make what changes we see fit inside the group. Ultimately the most disappointing, even shocking, thing about du Preez's public tantrum is a sense of entitlement and superiority so deeply ingrained that he asserts not only his right to an opinion, but claims the right to have his own facts too. What could possibly fuel such hubris?"

This charge was echoed by the columnist for Independent Media, Eusebius McKaiser. In response to a Tweet from Victor Dlamini asking :How exactly do you resign from a freelance role?" McKaiser commented on Twitter:

"@victordlamini: How exactly do you resign from a freelance role" Entitlement has its own internal logic Victor.

In a related matter Vukani Mde, Opinion and Analysis Editor at Independent Media, has defended his and Brown's attendance at the ANC's 103rd Anniversary in Cape Town in party branded gear - an image of which was subsequently circulated on social media (see below). In a 5 000 word article published in the Daily Maverick replying to a piece by Marianne Thamm, Mde defended his record of writing critically about the ANC.

Noting that the "white internet (or the white media establishment in its entirety) will ever forgive that picture, ever" Mde dismissed charges of hypocrisy - both in regards to the Donwald Pressley affair and to what his and Brown's response would have been to one of their journalists attending an EFF or DA gathering similarly attired:

"If any Independent journo of whatever level of seniority went to a DA/EFF/ANC event not to report on it but as a supporter of that party and posted pics of themselves, they would have NO problem with me or anyone in the group. Personally I don't want journalists who are ‘objective' automatons. And I have no problem with people who believe differently to me as long as they are capable of thinking through their own biases, as I myself strive to."

"I write truth to power, both the overt political kind exercised by the ANC and others, and the subtle but oppressive cultural power of South Africa's dominant elite as represented by you, Marianne Thamm. That fact, and that fact alone, is what truly discomforts you." 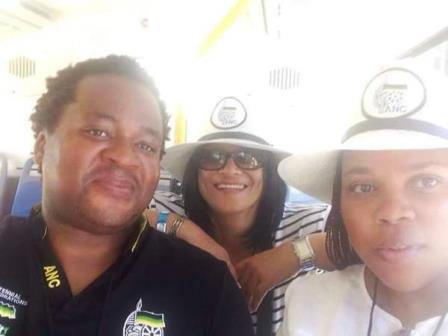 Meanwhile the editor of the Cape Times, Gasant Abarder has defended his decision to cut the column of veteran journalist and former Rand Daily Mail editor Allister Sparks.

In his Home and Abroad column which appeared on BDLive on Wednesday, and also now Die Burger, Sparks accused Independent Media's Iqbal Survé of behaving like a latter-day Louis Luyt - the businessman who fronted the National Party regime's failed effort to take control of the Rand Daily Mail and Sunday Times (by buying the SAAN group with state funds) in 1975.

Sparks noted that Survé had acquired ownership of Independent Newspapers with the "considerable help of the Public Investment Corporation, a government agency." Since Survé's Sekunjalo had taken control the group's newspapers had been "editorially cleansed ...of 23 senior journalists, including five editors, who were either fired or resigned. His main target has been the Cape Times, a venerable newspaper founded in 1876, with which I have had a personal relationship in various forms for the past 37 years."

Sparks suggested that Survé's strategy was to use the Cape Times to curry favour with the ANC, and thereby attract government advertising, not least by bashing the DA.

"So it was that I found myself a subject of Survé's latest purge of contributors, my column having earlier been dumped from The Mercury in Durban. It was fortuitous because I had already decided to withdraw my column from the Cape Times in protest at the effective firing of opinion page editor Tony Weaver, following that of editor Alide Dasnois, both of whom I regard as among the finest journalists in SA."

In a letter to Business Day, also published in the Cape Times, Abarder accused Sparks of telling reprehensible lies, explaining that he had terminated Sparks' column for both commercial and racial reasons:

"The fact is that I ended his column in the Cape Times for the simple reason that the same column was being run simultaneously in a competitor newspaper, namely Business Day. This made absolutely no business sense. I had informed Mr Sparks that we were ending his column because we were refreshing our offering of columnists. What I didn't disclose to him was that when I took over as editor of the Cape Times, more than 70% of our columnists were white males. How could this be right when the demographics of this country lie in stark contrast?"

Abarder also rubbished Sparks' claim that he was about to withdraw his column anyway as "Mr Sparks was happy to write for the Cape Times well after Mr Weaver left and even as long as a year after Ms Dasnois parted ways with the Cape Times."

Finally, he concluded by stating:

"But the single biggest element of fiction of Mr Sparks's column was that somehow Independent Media's executive chairman had a hand in the ending of his relationship with the Cape Times. The executive chairman learnt of the ending of Mr Sparks's column only after the fact. It is an insult to my integrity as a fellow professional and as an editor that Mr Sparks thinks I take editorial direction from our owner."