Executive Chairman of Independent Media and Sekunjalo Investment Holdings Dr Iqbal Surve appears to be planning to use an “anti-racism” campaign, recently launched by Independent Media, Sekunjalo and SACTWU, to smear critics as “racist”. This emerged from an exchange between Dr Surve and Dr Mills Soko, an Associate Professor at the University of Cape Town’s Graduate School of Business, on the latter’s Facebook page.

Those who Dr Surve apparently plans to “expose” as “closet racists” include editor of BizNews, Alec Hogg, Politicsweb editor James Myburgh, and author of How Long Will South Africa Survive and regular Politicsweb contributor RW Johnson. This follows Politicsweb’s publication late last year of an article by Myburgh on Independent Media which documented for the first time the full extent of the Public Investment Corporation’s financial involvement in the purchase of the group from its Irish owners in August 2013.

The article questioned how the group would be able to pay back the loan extended by the Government Employees Pension Fund to help fund the purchase given the continued decline in core circulation of most of its titles, or how it could exert editorial independence from government given its reported R896m debt to the GEPF. The article was subsequently re-posted on BizNews by Alec Hogg. Hogg noted in his introduction that insider talk, at the time, was that the price paid by the Sekunjalo consortium was double what the group was really worth. More recently RW Johnson also commented critically on the ANC’s failed efforts to buy influence through The New Age and the Independent Media purchase.

“It is time we assert our right to dignity as black South Africans. Alec Hogg, R.W Johnson,James Myburgh and many others need to be exposed as closet racists with a right wing economic agenda to preserve the white economic and political status quo. Independent has today launched a campaign to expose and name and shame such racists. i expect them to write some more nasty articles now about Independent to protect there (sic) right wing hedgemony (sic) ;).”

“Iqbal my brother, I applaud you on this important initiative to use Independent Media to combat racism in our country. You and I have come a long way and there are some issues on which we agree and some on which we disagree. But there’s one issue on which we passionately agree: the cancer of persistent white racism in South Africa and the threat is poses to the future of our country. I am available to work with you and your newspaper group to fight racism in South Africa.”

Dr Surve then responded: “thanks Mills we will call on you and others.” 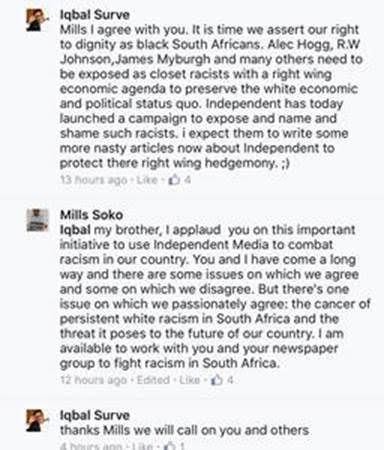 Asked for comment by Politicsweb on his agreement to participate in this campaign Dr Soko replied: “Let me make this clear. I applauded Iqbal's initiative to use his newspaper group to promote debate on the issue of racism in South Africa. And I told him I am keen to contribute as I feel very strongly about this issue as someone who suffers racism on a daily basis. I made it clear though to Iqbal that I am not interested in targeting individuals and will not be a part of that. That said, I feel very strongly about issues of racism and will not use any platform provided to air my views.”

“Through our collective efforts we will ensure that all our platforms, titles and our voices are used to engage in education, action, and debate on how to end racism and white privilege. 2016 must be the year in which we stop just the talk and act against racism. While it is difficult to legislate behaviour change, the battle against racism starts with each one of us. We need to ensure zero tolerance for racist behaviour and create an enabling environment that will engender a non-racial, more inclusive and just South Africa.”

As of the time of publication a request to Dr Surve’s office for comment had gone unanswered. It will be published if and when it comes through.

Late on Friday night Dr Surve tweeted that "Those with a racist right wing economic and political agenda James Myburgh @Politicsweb ,@alechogg , must know we shall not be intimidated." 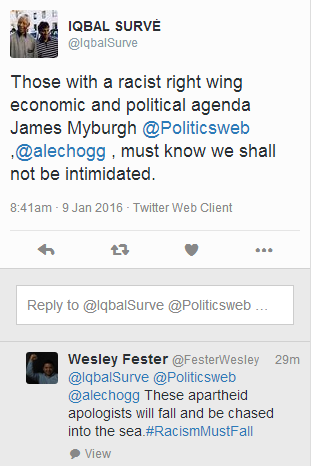 On Friday Politicsweb wrote to Dr Surve's office and Independent Media on these Facebook postings, stating: "On the face of it it appears then that Dr Surve is planning to use Independent Newspapers to smear those who have recently written critically about the group (and others) as 'racists', and is actively co-ordinating with various contributors on this matter. Comment as soon as possible would be appreciated."

At 7:20 PM on Saturday Dr Surve sent through the following reply:

On Sunday evening Dr Surve sent through a further comment:

In case you missed my latest post on FB.

Here it is and I do hope that you update your site. Perhaps it might just invite more racists comments which you unquestionably promote.

Comradely greetings in the struggle against all racists.

Poor James Myburgh, the Editor of Politicsweb is having a panic attack this weekend , because he believes that Independent is going to expose the right wing racist agenda of his site and person smile emoticon.

In a desperate move to prevent us from exposing his racist right wing agenda ,he mobilises his right wing friends that are prone to racial comments against Independent and myself. Below is the email I sent him in response to his request for comments from Independent on his latest diatribe against us. [see email above - PW]