Joburg is for softies - Jeremy Clarkson

In his column this week for the Sunday Times (London) Jeremy Clarkson does his best to prove that Johannesburg's "fearsome global reputation" is unfounded. The Top Gear presenter notes that crime is to the capitalist city of South Africa what architecture is to Rome, beef eaters are to London, and shopping is to New York. If you were to tell your mother you were heading off on "a package holiday to Kabul, with a stopover in Haiti and Detroit, and she wouldn't bat an eyelid." But, Clarkson continues, "tell her you're going to Joburg and she'll be absolutely convinced that you'll come home with no wallet, no watch and no head." However, he adds "I've spent quite a bit of time there over the past three years and I can reveal that it's all nonsense."

Clarkson musters up a number of compelling points to back up his thesis that "Johannesburg is Milton Keynes with thunderstorms" and "way better" than Vancouver. The first is that there was a front-page lead story in The Star a few weeks ago (see below) on "the theft of a computer from one of the local schools? I'm not joking. The paper even ran a massive picture of the desk where the computer used to sit. It was the least interesting picture I've ever seen in a newspaper." 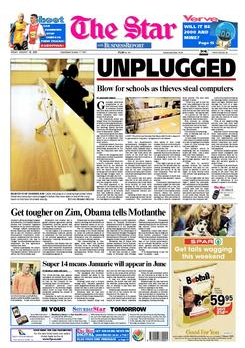 The second is that when he travelled from his hotel to the Coca-Cola dome each day, escorted by an armed guard, "all we passed was garden centres and shops selling tropical fish tanks." Clarkson makes the obvious point that if the streets were as violent as they are made out to be "then, yes, I can see you might risk a trip to the shops for some food. But a fish tank? An ornamental pot for your garden? It doesn't ring true."

The honest truth about the city is, he states, "You go out. You have a lovely ostrich. You drink some delicious wine and you walk back to your hotel, all warm and comfy. It's the least frightening place on earth." The real question is, he asks, is why does everyone there "wrap themselves up in razor wire and fit their cars with flame-throwers and speak of how many times they've been killed that day? What are they trying to prove?"

He points out that no foreigner is going to attend the football World Cup matches in the city if they think they're going to be stabbed. "Why ruin the reputation of your city and risk the success of the footballing World Cup to fuel a story that plainly isn't true?" His theory is that Joburgers are desperately trying to save the lions of the Kruger National Park. Every night, many Mozambicans - many with HIV/AIDS - cross the park in an effort to get into South Africa. And "very often these poor unfortunate souls are eaten by the big cats. That, you may imagine, is bad news for the families of those who've been devoured. But actually it's even worse for Johnny Lion." The problem, he suggests, is that these lions are at risk of contracting feline AIDS from the refugees they devour.

Clarkson concludes, "That's clearly the answer, then. Johannesburgians are telling the world they live in a shit-hole to save their lions. That's the sort of people they are. And so, if you are thinking about going to the World Cup next year, don't hesitate. The exchange rate's good, the food is superb, the weather's lovely and, thanks to some serious economic self-sacrifice, Kruger is still full of animals."

Politicsweb implicated in the ANC's "dirty war on COPE"?

On Friday the Mail & Guardian reported on an ANC document - produced for an alleged election ‘war room' - which lists "Cope's leaders and their allegedly dubious political dealings in the past 10 years... The document appears to rely on open source rather than ANC-insider information, meaning that it was probably commissioned from an outsider."

According to the M&G, in this document COPE Deputy President Mbhazima Shilowa "is identified as a ‘founder member of the ANC's national deployment committee constituted in 1997 and tasked with deploying ANC cadres to head up all key centres of power in society'. ‘Cope now argues that the best ­people for the job should be appointed,' the document reads."

This is remarkably similar to something that a certain individual - who is occasionally permitted to contribute to this website - wrote in an article in mid-January. That piece stated that Shilowa "was a founder member of the ANC's national deployment committee. This was the body set up in 1998 to implement the policy of deploying cadres to head up all key centres of power. ... [COPE's conference] resolutions also call for an immediate halt to ‘the practice of "deployment of cadres" which has often resulted in jobs-for-pals and has built in a culture of corruption'."

The ghost in the COPE machine

Over the past few days senior COPE leaders have prevaricated when asked whether they believed HIV caused AIDS. In an interview with News24.com COPE president Mosiuoa Lekota responded: "Look I am not an expert on HIV and Aids and I don't want to venture an opinion on whether it does or not - I am not a medical doctor. So I will not comment on that." COPE presidential candidate, Mvume Dandala, told The Weekender when asked the same question:

"I'm not a scientist. I don't want to be quoted by scientists tomorrow. All I'm saying is that our experience shows that there is a link between HIV and AIDS. And we see people succumbing to this every day. If we are told later that it (HIV) does not cause it (AIDS) and people have survived, it will be better than for us to say, ‘We will wait until we know the true facts before we do anything.' We have a crisis and it needs to be tackled with everything that we have."

The great mystery is why both leaders responded in this rather odd manner. Both men are under no particular obligation to defend the previous government's past policies on ‘HIV and AIDS'. Lekota's record on this issue not have been great - but it was no worse (if not better) than that of Jacob Zuma, Baleka Mbete, and Kgalema Motlanthe. Dandala meanwhile was one of five prominent individuals - including Edwin Cameron - who wrote to President Thabo Mbeki in early March 2000 asking him to reconsider his opposition to providing AZT to HIV positive pregnant women.

So, there is no obvious public upside to answering in this way. Perhaps, these two leaders are anxious not to publicly contradict the private views of some powerful but incorporeal presence in their organisation? But who or what could this be? And what is the ghost in the COPE machine now going to say about Lekota's recent comments in London that: "I have never once... I would challenge anybody to quote me as having said at any given time that the virus does not cause Aids. I have never said something like this. I have never held a view like that."

The dodgy CV of Carl Niehaus

Carl Niehaus: the skeletons tumble out