The social media postings that helped shape the narrative

The social media influencers who drove the Black-Monday-Apartheid-Flag narrative:

Police have asked that residents not block off any roads. Metro police and police are monitoring the situation.#BlackMonday pic.twitter.com/90nVhnh32i

Days like these are interesting as one gets to see the real views. pic.twitter.com/83auH2wrTY

So they still love this flag... #Black man u r on your own... R59 #Blackmonday pic.twitter.com/EYfkwofilI

It keeps getting better.

Some said on my previous tweet: ' he's just one guy'

As I've said, the day keeps getting better. pic.twitter.com/aMhEmH7WLO

Endorsing this flag is a sign that white people are not sorry for Apartheid.
This time we ready for war shame. #BlackMonday pic.twitter.com/D46uM7GTAV 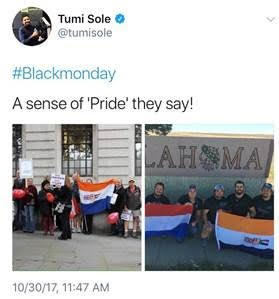 You can check my timeline for some of the flags there pic.twitter.com/Ke9Ia40l5m

'I felt protected under the Apartheid Flag'

Image of a subsequently deleted Tweet (of Andile Mngxitama) 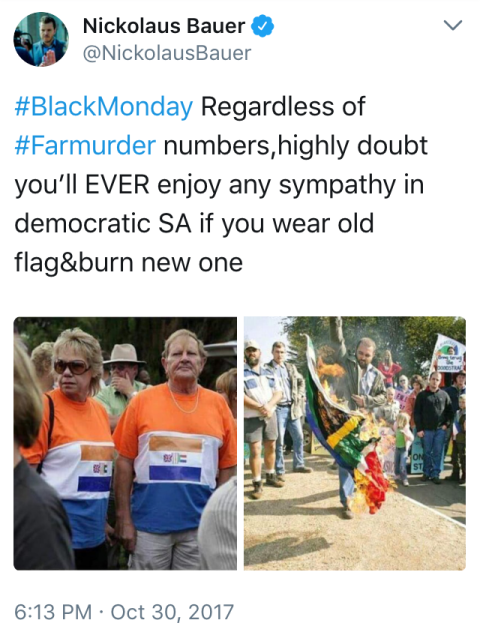 #BlackMonday was a disaster. Organizers asked people to leave old flag at home. They should have told such people to stay home, too. pic.twitter.com/px85csHpf7

Yesterday was a curtain raiser for conversations that were long overdue

On folk devils, flags and freedoms (I)

Black Monday hubris: Is this why farmers were so brutally murdered? - NMF

How Fake News was used to hijack Black Monday