Margaret Thatcher, Nelson Mandela and the end of apartheid

THE persistent claim that Margaret Thatcher supported apartheid is one that Robin Renwick has come to attack. "She did not," he says, rather testily, during our interview. "She wanted to get rid of it, to help bury it." In this regard, Renwick adds, the former British prime minister applied more direct pressure on the Nationalist government than all her international counterparts combined to unban the liberation movements, release their leaders and begin the process to implement majority rule.

This is a central theme - his cri de coeur, in fact - in his crisp, dynamic account of his years here as Downing Street's envoy, Mission to South Africa: Diary of a Revolution, and in its pages the myths about Thatcher in this regard are given short shrift: for example, Thatcher did not call Nelson Mandela a "terrorist" - but she did label  the African National Congress "a typical terrorist organisation" when it threatened to attack British companies in South Africa; and no, she never said that it was "cloud cuckoo land" to suggest the ANC would rule South Africa - that was a Tory spokesman's term, used in a scenario about the movement seizing power. 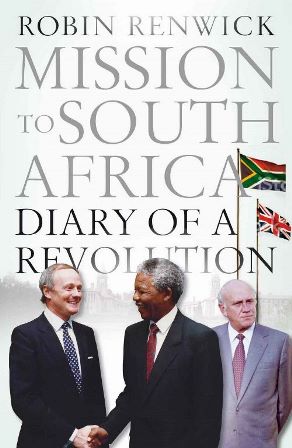 "People get surprised at Thatcher's lack of enthusiasm for the ANC," Renwick says. "What she saw was the necklacing of collaborators in the townships, attacks on soft targets proclaimed by [Umkhonto we Sizwe chief of staff] Chris Hani to be MK policy because hard targets were too difficult, and two-thirds of the politburo were members of the SA Communist Party. What's to like about that? That was her take.

"I used to say to her, ‘Yes, but, nevertheless, there will be no solution to this issue without the ANC.' Thatcher was far more intelligent than people give her credit for. She said, ‘Okay, if that's the way it is, we just have to adapt to that.'

"The point is that she made greater efforts to get Mandela out of jail than any other foreign leader. Anybody who contests that needs to read this book. Because, unlike Helmut Kohl, George Bush, or whoever, they would say, in Congress, or wherever, ‘Apartheid must go and Mandela must be released.' And a year later, or six months later, they would say the same thing. She bombarded the South African government with pressurising messages about all this and also about Namibia and so on. Every few weeks PW Botha got another message from Thatcher saying, ‘You know, what are you going to do about this?' Which he really resented and I had to have meetings with him. Eventually we did get something out of him on Namibia, but not anywhere else.

"But with FW de Klerk too, you know, she didn't stand back. She embraced De Klerk but said, ‘You've got to move forward.' So no foreign leader worked harder to get Mandela out of jail. And that's just a matter of fact."

Much of Mission to South Africa - foreign editions have the loftier title of The End of Apartheid - comes from his own notes of his time here, which gives the book much of its first-hand, behind-the-scenes punchiness, but a great deal of it also comes from his diplomatic despatches and the records of Thatcher's dealings with the Nationalists. These were released from UK government archives for publication by the British Foreign Office, which waived its 30-year confidentiality rule.

The book is refreshingly blunt. Renwick doesn't hesitate to correct what some have termed the "hackneyed" image of Mandela as a saintly icon, but rather portrays him as a master politician, crafty and visionary. He is quick to disparage other political figures, too, but readily gives credit where it's due - sometimes to the most unlikely, and surprising of people.

"History gets rewritten," he explains. "And I get fed up with that. The ANC have every reason to take a huge amount of credit for the political change here, absolutely, and I yield to no-one in my admiration for Mandela and these people. But there was a huge contribution by De Klerk. The decisive event [in the transformation to democracy] was the shift in Afrikanerdom. It was the shift in the Afrikaner world, the realisation that they had to change."

That said, there were Afrikaners who were not going to change: Adriaan Vlok, Magnus Malan and, of course, PW Botha.

"This guy should never have been president," Renwick says. "I feel very strongly about this, because he got there partly by accident. There was the Information Scandal, which had knocked out [Connie] Mulder, he came up through the military channel and so on, he was an extremely aggressive and difficult person, unlike De Klerk who was actually easy to get on with normally. There was a really hostile relationship between those two. But that wasn't why I disliked him so much, it was because of the [apartheid] death squads.

"I felt I was dealing with someone who was in fascist territory. We all knew his history in the Ossewa Brandwag. He was like that. He hated the Brits. He had to put up with Thatcher but there was a mutual dislike and distrust. He didn't make a good impact on her. He's a truculent person. Being female, she judged people very instinctively. Most men like to think we'll listen to the arguments for three hours, talk, and then decide. She didn't operate like that at all. Her question was, ‘Can I trust this guy?' He didn't pass the trust test.

"What however, she did give him credit for, rightly, was, well, she knew he'd abolished the pass laws, which was a really major step in terms of the lives of black South Africans and secondly, he'd abolished the Mixed Marriages Act. But as I said to her, and she accepted this, what he's trying to do is modernise apartheid, not get rid of it."

Botha, it must be said, appeared to be confused in his own feelings about the British PM. Responding to her claim in September 1983 that the cause of SA's problems was its racial policies, he declared, "I would appreciate it if Mrs Thatcher withholds herself from South African affairs." Yet, after meeting with her in Downing Street in April 1985, he told the Sunday Telegraph, "Rather than embarrass the prime minister herself with my admiration, it would be far more diplomatic to say I got on famously with Denis [her husband]."

Renwick's mission in SA mission, though, was in Thatcher's words, to "help find and identify a successor we can do business with".

Easier, as they say, said than done.

"Well, as one interviewer said to me, it was the worst of times, and the best of the times. The worst in the sense that it was full of full-scale repression and death squads and a regime that was increasingly militaristic and I really felt that indeed dealing with Botha and Malan I was dealing with two of the most unpleasant characters you could imagine dealing with.

"But there were huge numbers of South Africans from all sections of the community - not just the highlight names that everybody knows about - who were determined to change things for the better and one reason that I wrote this book was to remind people, well, for instance, let's start with the Afrikaners. Not many people seem to remember what [Dutch Reformed Church leader] Professor Johan Heyns did to try and change things in this country, and he was murdered for it. He wasn't the only one.

"Gerrit de Kok, who was the head of the SA Reserve Bank, had a big influence on FW de Klerk. Pieter de Lange, the head of the Broederbond. He was saying, ‘We have to change, we can't stay where we are,' and so on, as well as the younger Nat MPs like Roelf [Meyer], like Sam de Beer, like Leon Wessels.

"These people get airbrushed out of history. They all contributed a lot. Same with the Progs. My closest friend in this country was Helen Suzman. My other close friend was Van Zyl Slabbert. These people made a huge contribution. Helen had a keen sense of humour, she always used to point out to some verligte Nat who had made a speech, that she had made the same speech 20 years before. And Desmond Tutu, obviously.

"But on the other side of the political divide, there were people within the ANC with whom I developed a huge respect, like Walter Sisulu, Ahmed Kathrada, Andrew Mlangeni. Lions, if you like, of the liberation struggle. [Oliver] Tambo was actually a very impressive person and he was kind of driven to the position he was in, he was not by nature any kind of extremist, and it was a real tragedy that by the time he came back he was really very frail. Still, he was very feisty. He told the ANC conference that it was no use asking for sanctions against De Klerk. He also told Mandela it was high time he met Buthelezi.

"Obviously, together with Mandela, these people all represented the best of the old ANC in the sense that they'd sacrificed, in some cases, their lives, for the struggle. They had no expectations of benefitting from it financially or in any other way. Mandela was the least power-hungry political leader I'd ever met. After one term he said, ‘That's enough!' He was trying to set an example for other people I can think of in this neighbourhood. As I said in the book, he absolutely detested Mugabe. Talking to me, he used to refer to him, risibly, as ‘Comrade Bob.' He said if the land occupations ever started here, I would come out of retirement and stop it on the first pass."

It's no understatement that Renwick is disappointed with the present government.

The old ANC, he stresses, was a "struggle" organisation. "Today," he says, "it's a ruling party, and it behaves like other ruling parties do. It wants to hold onto power. You know there are a lot of obvious comparisons today between the ANC and the National Party. I have to qualify that. The ANC are not going to impose apartheid, or anything like that, obviously, but you know the National Party sought to cling onto power, it sought to dispense patronage. If you didn't belong to the National Party, within Afrikanerdom, your prospects weren't as good as if you did.

"I have many friends within the ANC today, and many of them are people who are really just trying to do their best for this country, and the ANC government in the last 20 years has delivered a lot more housing, a lot more electricity supply to the townships, a lot more water supplies. But there have been very often the obvious areas of incompetence, mismanagement and very obvious areas of corruption. That's the way it is now."

Mission to South Africa: Diary of a Revolution by Robin Renwick is published by Jonathan Ball.

Glory Sedibe and the Boers

Mandela, Mbeki and the rise of the predatory elite