In their reactions to the results both Minister of Basic Education, Angie Motshekga, and the African National Congress, cited the top rankings of these two provinces to rebut claims that the ANC government had failed to deliver decent education to the poor. The ANC stated that: "We are particularly proud of and congratulate the Free State and North West Provinces which were ranked 1st and 2nd best performing provinces respectively. These provinces, which are largely rural and under-resourced, occupy pride of place in our national schooling system."

Critics of the DA in the Western Cape gleefully seized upon the province's slide in the rankings to argue that the Zille administration was failing to deliver. NEHAWU slammed the province's "mediocre performance" while ANC Western Cape leader Marius Fransman expressed disappointment at the results and called for a shake-up of the provincial education department.

When it comes to Bachelors degree passes - the pass needed to progress on to university study - the Western Cape (40.9%) and Gauteng (38.9%) were ranked first and second, ahead of the North West (34.9%) and Free State (33.1%). Nonetheless, the performance of these two "rural and poor" provinces, as Motshekga describes them, is nonetheless striking. The substantial increase in the government matric pass rate in 2013 still needs to be subjected to proper forensic analysis. However, what the provincial rankings illustrate are the danger of using the pass rate as the sole measure of performance in matric.

One of the ways schools and provincial administrations have been traditionally able to increase their pass rates is by "culling" weaker pupils between Grades 10 and Grade 12. In other words huge numbers of ill-educated pupils fall or are pushed out of the system before they even sit down to write final National Senior Certificate examinations.

If one measures, by province, the ratio of the 2013 government matric results against the 2011 Grade 10 government school enrolment figures it is evident that the Free State and the North West owe much of their current success to an exceedingly high drop-out rate in the two years preceding matric. Indeed, of all provinces, the North West had the highest drop-out rate between Grade 10 and matric (56.5%) with the Free State following closely behind (54.8%). By contrast, the Western Cape had by far the lowest drop-out rate (35%), followed by KwaZulu-Natal (42.1%) and Gauteng (43.2%). See Table 2.

* Figures for 2011 are for public ordinary schools only (not independent schools). The government matric results include some pupils from independent schools who wrote the NSC rather than the IEB examinations. The percentages given are thus maximums. The distorting effect is likely to be highest in Gauteng given the disproportionate number of independent schools based in the province.

Dividing the number of pupils who passed the 2013 government matric over the number of Grade 10 pupils in ordinary public schools in 2011 - rather than simply the number who sat the examinations - may be a somewhat crude measure, given the provisos mentioned above, but it provides a far more realistic picture of provincial performance. On this measure the Western Cape has by far the highest percentage passing matric (55.3%), followed by Gauteng (49.4%) and then KwaZulu-Natal (44.8%). The Free State and North West come limping in, in 5th and 6th place respectively.

What this does not explain however is the jump in the government matric pass rate to 78.2% in 2013 from 73,9% in 2012, and 70,2% the year before that. The degree to which this increase reflects political manipulation, rather than an underlying improvement in educational standards, awaits further analysis. 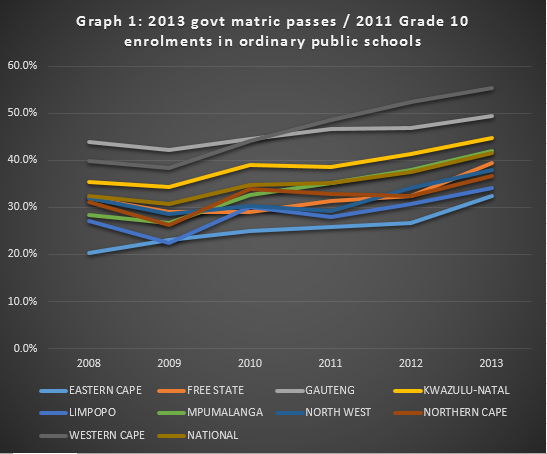 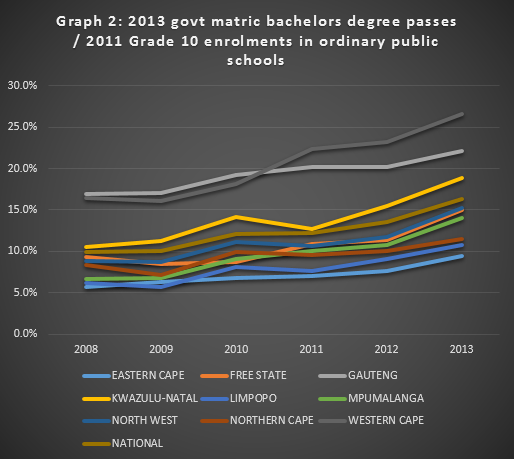 Update (January 9 2014): Following publication of this article we received data on the government matric results for pupils in public schools alone (i.e. excluding those pupils in independent schools who wrote the government, not IEB, examinations.) The following is a table with this data.

It should also be noted that if "bunching" occurs in different provinces in different grades this may have some effect on provincial comparisons.