This brief is the third in a series of six on urban transport. The first two briefs presented statistical material which delineates key current features of transport in metropolitan and urban areas.

This brief will deal with trains, and the fourth and fifth briefs will cover buses and minibus taxis. The final brief will discuss the planned future of the transport system in the five largest metros.

PRASA Rail is the largest operating division of PRASA. Within in it there are two sub-divisions:

- Metrorail, which operates commuter rail services in urban areas; and

- Mainline Passenger Service which is again sub-divided into Shosholoza Meyl, which operates regional and inter-city rail services, and Premiere Classe.

Subsidiaries of PRASA include Autopax which operates two bus services, the luxury brand Translux, and semi luxury brand-City to City, and Intersite which manages the property owned by PRASA. Metrorail services includes Metro, Metro Plus and Business Express services.[2]

Metrorail, which is responsible for metropolitan commuter services in four provinces (Western Cape, Gauteng, KwaZulu-Natal and Eastern Cape) has a fleet of over 270 train sets making up to 3100 coaches with each coach carrying more than 100 people. Metrorail is responsible for transporting up to two million passengers daily in the following provinces: Gauteng, Western Cape, KwaZulu-Natal and Eastern Cape. PRASA owns 317 stations of the 468 stations Metrorail operates, with the remainder belonging to Transnet Freight Rail, and provides commuter services on 3180 kilometres of track, of which its owns 2228 kilometres and Transnet Freight Rail the rest.

In safety matters, it is subject to the Railway Safety Regulator.

In 2017, PRASA launched the beginning of a 20-year modernisation programme with the introduction of the Metrorail commercialised passenger train - called the People’s Train. This plan will offer faster travel times, reliable service, improved security with CCTV cameras and fully air-conditioned trains.[3]

The People’s Train was part of the MTEF (Medium Term Expenditure Framework) 2016-2019 Corporate Plan which describes its mission “[T]o strive for High-Quality and Sustainable Passenger Services through Service Excellence, Innovation and Modal Integration”.[4]

Gauteng infrastructure also includes the Gautrain, an 80-kilometre rail system, which links Johannesburg, Pretoria, Ekhuruleni and O. R. Tambo International Airport. It was built to relieve the traffic congestion in the Johannesburg–Pretoria traffic corridor and offer commuters a viable alternative to road transport, as Johannesburg has limited public transport infrastructure.[5]

The 2013 National Household Travel Survey found that trains were used by 535000 commuters. Their waiting time was higher than other public transport types with commuters waiting over 15 minutes for trains to arrive (73,7% in Gauteng and 18% in the Western Cape).

Commuters taking trains were the most likely to change transportation and make a model transfer. The percentage of transfers dropped from 26,5% in 2003 to 17,1% in 2013.

Dissatisfaction with the service

The most common reported complaint about trains is that there was no train service available. 48% complained of this). For the Eastern Cape, that never had an extensive rail network, dissatisfaction about availability of trains dropped from 71% in 2003 to 57% in 2013. In all other provinces where train services generally shrank there has been a noticeable increase in the percentage of households who indicated that they did not use trains because they were not available.

Table 1 below records other frustrations with train services by users in 2013. Nationally, overcrowding and lack of punctuality were the main sources of unhappiness. The majority of users were also dissatisfied with security en route to the trains, the distance between home and the nearest train station, the frequency of trains in the off-peak period, and train travel times. Just under half of the users in Gauteng were displeased with the service overall, followed closely by users in Cape Town. 40% were dissatisfied in the Eastern Cape and a third in KwaZulu-Natal.

Table 1 – Per cent of users recording dissatisfaction with Metrorail 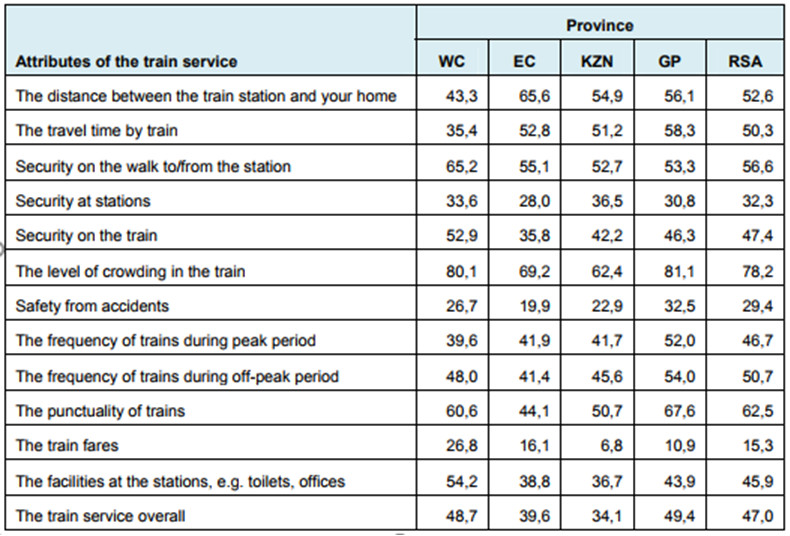 PRASA’s commitments, with a focus on Gauteng and the Western Cape

PRASA’s Corporate plan recognises the issue of over-crowding in particular in the Western Cape, where 55% of public transport users use trains, and in Gauteng which has the highest concentration of population and economic activity. The plan aims to increase frequencies on key corridors using a regular-interval timetable, in order to improve good connections between services at key junction stations and the time of the commute. Without action, commercial growth opportunities will worsen current overcrowding and long journeys making trains even less accessible or attractive. PRASA’s Corporate Plan aims to redesign services to manage capacity and overcrowding.

In terms of direct infrastructure upgrades that enhance safety, PRASA is undertaking the following:

- PRASA’s Corridor Modernisation Programme plans to upgrade signalling as currently the old model increases the risk for accidents and delays.

- PRASA intends to replace all existing signalling interlocking, which has obsolete mechanical systems, and replace them with electronic interlockings.

- The PRASA Capital Programme includes a number of security initiatives, including spending on depots fencing which is part of PRASA’s technical infrastructure rollout as well as the fencing programme. There is also further spending on Integrated Station Access Management System, which includes CCTV and access points.[7]

In terms of infrastructure developments that directly increase security of commuters, staff and pedestrians, PRASA undertakes the following:

- Reducing threats to staff and customer safety, cable theft and fare evasion, resulting from operating in an unsecured environment. The Fencing Programme will be targeted at securing the stations and the rail network.

A capital baseline of R603 million to support the security environment is proposed over the next three years. The allocation will support corporate security to rollout CCTV cameras, access control, early detection systems, integrated control rooms, alarm systems, and fire detection. The works will mainly be at key PRASA office buildings, depots, corridors and stations. The allocation will support the acquisition of specialised vehicles for rapid response, specifically on rough terrain.

Over the next three years, R1 billion is proposed for the National Electrical Programme. The condition of some of the electrical structures is a risk from a safety point of view which could potentially endanger the lives of commuters and the general public. Funding in this area is therefore critical for the restoration of infrastructure and increased power capacity.[8]

Despite the above ambitious undertakings by PRASA, negative publicity has been a great cause of concern for train users and for the public in recent times. At the time of writing this brief, PRASA has been in the news for governance issues, mismanagement and safety concerns.

In terms of governance and mismanagement issues, it has recently been reported that the Spanish manufacturer of PRASA's controversial Afro4000 locomotives failed to disclose payments of over R75 million made to a former colleague and "friend" of the embattled state-owned company's former CEO, Lucky Montana.[9] Further, Cromet Molepo, the acting group chief executive of PRASA, is alleged to have disregarded advice from the Treasury and hired locomotives from a private company over the 2016 December festive season.[10] In January 2018, Mthuthuzeli Swartz was appointed an acting CEO of rail who is under investigation for corruption and sexual harassment.[11]

There are also safety concerns surrounding PRASA trains. On January 9 2018, a train rear-end crash at a station in Germiston, east of Johannesburg, left at least 200 commuters injured. A few days earlier, near the Geneva station in the Free State, 19 people on a Shosholoza Meyl train were killed when a train hit the trailer of a truck carrying soya beans. The Railway Safety Regulator (RSR) has banned PRASA using from using manual authorisation for train operations with immediate effect from 13 January 2018. The ban was enforced as The RSR was convinced that PRASA Rail did not have the means to prevent accidents from happening during degraded mode when manual authorisations are undertaken.[12]

Fare revenue for the year, the biggest revenue source after the operational subsidy, declined year on year by 7%, as a result of Metrorail service challenges (fare evasion due to the open nature of the system, power failures on the East Rand, track infrastructure in the Western Cape, the impact of external factors such as community protests spilling onto the rail environment, heavy rainfalls that resulted in sinkholes on one of the busiest lines in Gauteng). Metrorail paying passengers have been on the decline since 2013/14 and in 2015/16 they were lower than they had been in 2010/11. Metrorail missed its passenger trips target by 17% in 2015/16.

In the year ended 31 March 2016, PRASA reported fare revenue of R 2 736 million, with operating rental lease income bringing in R 568 million. Sundry income was R 222 million. In addition, there was an operating subsidy of R 4 925 million.

It is the capital subsidy which keeps PRASA afloat in cash flow terms. Net cash flow from operations and investment was a negative R 8 706 million.

Metrorail is the core of PRASA and has carried the burden of cross subsidizing Main Line Passenger Services for a number of years.

The general condition of rolling stock is deteriorating due to the poor quality of maintenance in the rolling stock depots. As indicated above, PRASA has committed to turning this situation around

Metrorail also seriously under-performed in 2015/16 on delivery of locomotives, refurbishment of coaches, modernization of stations and bus feeder services.

Despite the massive subsidisation of PRASA, Metrorail is failing at the operational level to get ahead of its many problems. As a result, passenger dissatisfaction is high and passenger numbers are falling. PRASA needs to up its game radically in the large metro areas, especially in Cape Town, if it is to contribute adequately to integrated public transport.

[4] See PRASA’s Corporate Plan on page 5 available at https://www.PRASA.com/downloads/PRASA_CP.pdfaccessed on 10/01/18.

[5] Information extrapolated from the Gautrain website available at https://www.gautrain.co.za/accessed on 15/01/15.

[11]Barbara Maregele “PRASA appoints a CEO who is under investigation for corruption” available at https://www.news24.com/SouthAfrica/News/PRASA-appoints-a-ceo-who-is-under-investigation-for-corruption-20180111 accessed on 15/01/18.